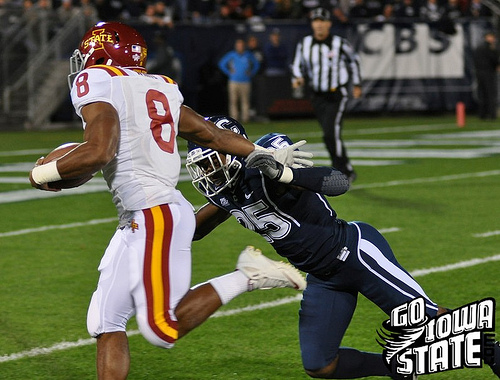 The depth chart shows 25 freshmen in the two deeps. Already this season, 18 of a possible 23 true freshmen have seen action.

How’s that for a talented recruiting class?

A few of those newcomers flashed their talents against the Cyclones, starting with receiver Jaxon Shipley. The true freshman caught six passes for 141 yards. He added a 40-yard touchdown reception on a trick play.

That pass came from another true freshman, David Ash. The 6-3, 222-pound quarterback completed 7-of-12 passes for 145 yards and two touchdowns. Running back Malcolm Brown added 63 yards on the ground for the Longhorns.

Darius Reynolds should go ahead and burn Saturday’s game tape. The senior won’t want to watch it again.

Twice, holding penalties on Reynolds negated huge runs by James White. In the first half, White burst down the left sideline for a near 60-yard gain only to have it called back by a hold. The play may have helped put the Cyclones back in the game.

In the second half, White thought he ran for a 48-yard touchdown. Not so fast. Reynolds again got caught holding well down the field.

Reynolds finished the game with six catches for 70 yards, but unfortunately his holding penalties played a much larger role in the outcome.

One player who was ready to go Saturday night was Patrick Neal. The senior made a few big plays when the game was still in doubt.

On the Longhorns’ first possession, Neal led a crowd of Cyclones that stuffed a fourth-and-one rushing attempt on the 11-yard line.

Neal kept making plays the next time on the field. This time, the senior from West Des Moines sacked Case McCoy on third down to force a Texas field goal.

Neal finished the game with four tackles and a sack in perhaps his best game of the young season.

As if it couldn’t get any worse, a number of Cyclones suffered injuries on Saturday night. The most serious appeared to occur to Leonard Johnson after he took a shot to the head. The senior was carted off the field after being immobilized. Thankfully, Johnson waved the crowd as he left the field.

Paul Rhoads said after the game that Johnson had feeling in all his extremities and was being taken to Mary Greeley Medical Center for precautionary reasons.

Offensive tackle Brayden Burris could also be out for awhile after suffering a broken bone in his leg.

The injuries didn’t stop there as Shontrelle Johnson suffered a stinger and Kelechi Osemele continued to have problems with his injured ankle.

–       Steele Jantz set career highs in completions (28) and attempts (51). The junior quarterback finished with 251 yards passing with one touchdown and one interception.

–       James White scored a touchdown in his third consecutive game and set a career-high with 64 yards on the ground.

–       Official attendance for Saturday’s game was 56,390 – the second biggest crowd in Jack Trice Stadium history. The Cyclones three-game home attendance this season is 167,147 – a new record.

James White on two long runs getting called back

“It’s real frustrating,” White said. “We couldn’t find any momentum. It’s always something. We were turning the ball over or getting penalties. We couldn’t get over the hump.”Paul Rhoads on the Jack Trice crowd“It was electric, it was what I expected,” Rhoads said. “We are so appreciative. The spirit walk was the best it’s ever been. It probably took us 10 minutes to get to the locker from the time we got off those buses. I’m ashamed as a leader of this football program that I didn’t give them a product that could make them stick around for 60 minutes and make them be a 12th man for us.”

Notebook: All around struggle in loss to Iowa