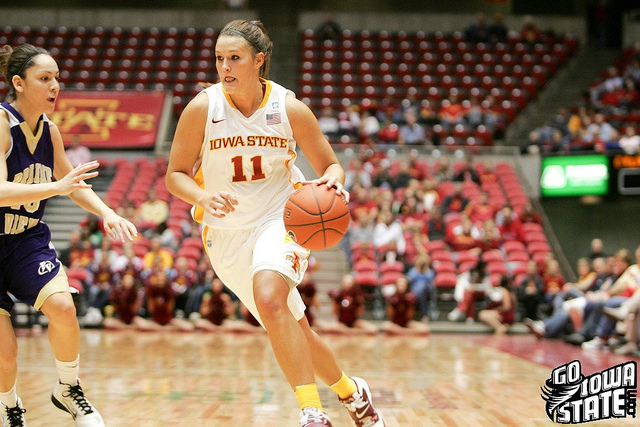 Women’s basketball coverage at CycloneFanatic.com is brought to you by our good friends at Wilson Toyota of Ames located at 2218, S. Duff Ave.

AMES – Kelsey Bolte’s carried Iowa State so many times this season, it’s only fitting that her teammates were the ones who delivered the knockout punch on Senior Night.

“Once we got it going, I told Coach (Jodi) Steyer, it was like the old days,” Iowa State coach Bill Fennelly said. “We had a little more offensive weapons, we are shooting threes, we are guarding.

A sluggish first half started to turn into a blowout soon after halftime. Grasping a tenuous 30-27 advantage, Iowa State flipped on the jets. In perhaps their most impressive stretch of play this season, the Cyclones dominated the Jayhawks (19-10, 6-9) for the better part of 20 minutes.

Only this time, it wasn’t Bolte doing the damage. It was her teammates who shot past the Jayhawks. Eight different players scored in the second half, including 11 points from reserve forward Amanda Zimmerman in only 13 minutes.

“The second half, I don’t know if we can play any better,” Fennelly said.

Zimmerman applauded Bolte’s career by impersonating her teammate. Displaying a sweet stroke from 3-point range and toughness inside, Zimmerman ignited the Cyclones and the Hilton crowd.

The sophomore drilled a 3-pointer from the left corner to give Iowa State a 40-27 lead. A few possessions later, Zimmerman converted a traditional 3-point play by forcing her way inside for a bucket. The flurry ended when Zimmerman swished another 3-pointer for a 50-29 edge.

“There was a timeout right after I hit my first three, and I just ran up to (Bolte), gave her a huge hug and was like, ‘That’s for you, Bolte. You deserve it.”’

Playing alongside the scorching Zimmerman, other Cyclones got in on the act. Kelsey Harris and Chassidy Cole hit 3’s, Anna Prins scored inside and Chelsea Poppens continued her stellar play with 13 points and seven rebounds.

Oh yeah, the defense was pretty good, too. The 36 points is the fewest Iowa State has ever allowed in a Big 12 game.

In the end, it all added up to a huge Iowa State victory and sent Bolte out in style.

“There are not many times in your life when you have a moment or a night that you’ll remember forever,” Fennelly said. “She had one tonight. It doesn’t get any better than that.”

Kelsey Bolte put off writing her senior speech as long as she could hoping if she kept procrastinating her time at Hilton would never end. Evidently, time doesn’t stop, even for one of the best players in Iowa State history.

This season, all Bolte’s done is average 19.5 points per game in conference play. On Monday, she was added to the Wade Watch List, the award given yearly to women’s basketball’s best player.

“I told our team before the game to learn not just from the way she played, but the way she carried herself,” Fennelly said. “The dignity, the class, the way she represents her family and her school.

“I challenged our players to give her your best effort. That’s what she’ll remember and that’s what she deserves.”

Bolte delivered one more memorable performance on Tuesday. She kept the Cyclones ahead in the first half, and drew Kansas’ attention in the second while her teammates dominated.

Fennelly took Bolte out of the game to a standing ovation after she scored 17 points, grabbed six rebounds and dished out five assists.

“I really just focused on the game,” Bolte said. “When the seconds were rolling down, I was getting a little misty.”

The last time Iowa State played Kansas, the Jayhawks dropped 86 points on the Cyclones. Not this time.

The key was stopping the Jayhawks’ Carolyn Davis. The sophomore scored 31 points the first time the teams met. Against Nebraska last Saturday, Davis notched 36 points on 16-of-19 shooting.

There was no repeat performance on Tuesday. Davis tallied only six points and battled foul trouble for much of the game.

“Our coaches told us to keep (Davis) out the lane so she doesn’t get a good position on us,” Poppens said. “Just be physical with her and don’t let her push us down.”

Consider it a job well done.

–       Saturday’s win over Kansas State gave the Cyclones 20 or more wins for the fifth season in a row. Iowa State has accomplished that feat only one other time program history (1998-2002).

Iowa State is getting hot just in time for the postseason. The Cyclones will look to keep their four-game winning streak going when they travel to Missouri for the last game of the regular season on Saturday.

Earlier this season, Iowa State throttled Missouri, 71-56, thanks to big performances from Hallie Christofferson and Chelsea Poppens. Christofferson dropped 18 points and nine rebounds on the Tigers. Poppens dominated inside with 12 points and 19 rebounds.