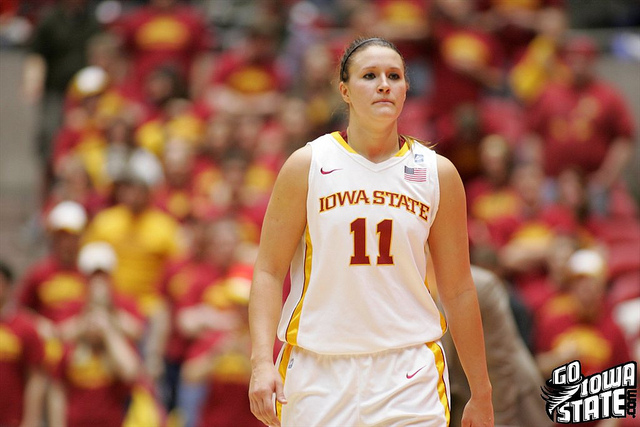 The Ida Grove native is a completely different player this season.

In under a year, Bolte transformed herself from a lethal, but stationary shooter, into an all-around weapon who can score from anywhere on the court.

All it took was countless workouts, thousands of jumpers and the help of a former Cyclone.

“I’m amazed,” Iowa State coach Bill Fennelly said. “I don’t know that I’ve ever had anyone at that age totally change their game, and be willing to do it.”

When the Cyclones (22-10) tipoff with Marist on Saturday morning, it will mark the fourth-straight year Bolte will play in the NCAA Tournament. Iowa State has won 20 or more games in all four of Bolte’s seasons in Ames.

Bolte  started to revamp her game in late August. Not satisfied with being a complimentary piece, the senior took it upon herself to make drastic changes. To go along with the excellent coaching she receives from her position coach Jodi Steyer, Bolte paid Lyndsey (Medders) Fennelly out of her own pocket for extra help this season.

“She wanted to be a better player,” Bill Fennelly said. “She knew there were things she needed to get done. Between what we get done in practice with Coach Steyer and her willingness to pay someone to help her, that says a lot when you’re a senior.”

Iowa State fans probably remember Lyndsey Fennelly better when she had Medders stitched across the back of her jersey. She finished her career as the Cyclones’ all-time leader in assists and seventh in scoring.

Since she graduated in 2007, Fennelly has become the director of Point Guard College, who run year-round camps all over the United States. Her work is drawing such rave reviews that former Cyclone and current Philadelphia 76er Craig Brackins plans on training with her this summer.

With such an impressive background, it was only natural that Bolte would approach Fennelly last summer for help. The duo immediately went to work. Instead of just jacking up 3-pointers, Lyndsey Fennelly made Bolte dribble. Sounds easy, right? Not when you’re used to getting wide-open shots off an Alison Lacey pass.

Drill after drill, Bolte and Fennelly practiced attacking off the dribble and off screens.

“It was a definite evolution from being a catch and shoot player to someone who has versatility off the bounce,” Lyndsey Fennelly said.

All the hard work paid dividends. Bolte jumped her scoring average from 12.3 points per game in 2009-10 to 16.8 this season. In conference play, that number spiked to 18.6 points.

Not only that, Bolte’s shooting percentage went from 39 percent in 2009-10 to 44 percent this season. She’s made 49 more field goals and 46 more free throws than a year ago.

All of the numbers added up to an unanimous selection to the all-Big 12 first team.

“I wanted to step my game up,” Bolte said. “I didn’t want to be a standstill 3-point shooter anymore. I think people can tell it’s improved my game completely. I can put the ball on the floor. I get to the free-throw line a lot more. It’s transformed my game.”

Opponents quickly noticed Bolte’s improvement. With Lacey in the WBNA, defenses turned their focus to Bolte. To combat the extra attention, the Iowa State coaches got creative to get the ball in Bolte’s hands.

Bill Fennelly estimated that 99 percent of the Cyclones’ plays involved Bolte. Joking or not, Fennelly probably wasn’t far off.

“She’s a strong enough athlete that she can run a long time,” Fennelly said. “She’s really hard to guard because she just keeps moving. She doesn’t get tired. You add that to a better skill set, that makes a difference.”

Bolte shouldered Iowa State’s scoring load more than a handful of times this season, but the Cyclones were at their best this year when her teammates did most of the damage. When Iowa State gets relatively balanced scoring, it can hang with almost any team in the country.

Of course, it helps Bolte is on her game, too.

“She’s meant a tremendous amount to us,” sophomore Chelsea Poppens said. “She’s led us this whole way. Without her, I don’t know if we’d be in this tournament.”

Two years ago, Iowa State made an improbable run to the Elite 8. Last season, it was the Sweet 16.

With Bolte leading the way, don’t be surprised if the Cyclones make some more noise this March.

Is Christofferson Iowa State’s next star?