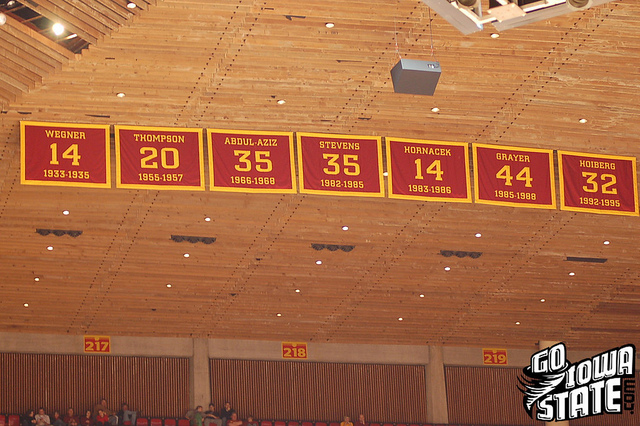 Fred Hoiberg said it himself after Sunday’s 74-47 win over Alabama State. Hoiberg told reporters that he couldn’t have scripted his first two games as Iowa State’s head basketball coach to go any better. The Cyclones didn’t just beat Northern Arizona and Alabama State last weekend. They buried them. Iowa State did exactly what a Big 12 program should to do teams from the Big Sky and the SWAC. There wasn’t a single point during the weekend where any Cyclone fan inside of Hilton had to sweat.

Things are about to be taken up a notch as in-state rival Drake will invade Hilton Coliseum on Wednesday night.

“It is always a special game when you play the in-state opponents,” Hoiberg said during his Monday press conference. “It should be a little bit better energy. I am hoping that we get a little better turnout on Wednesday night. We need to come out with that same energy and passion that we brought to the floor these last two games.”

Senior Jake Anderson has been instrumental to Iowa State’s success so far. Anderson, a 6-foot-2 transfer from Northern Illinois was recently named the Big 12’s Rookie of the Week. He’s averaged 12.5 points and 10 rebounds per game thus far. That’s no typo. A 6-foot-2 guard is Iowa State’s best rebounder and that will likely be the case all season long.

“He asked me what I needed out of him. I said ‘I need you to rebound big guy,’” Hoiberg said. “He knows where the ball is. He has great rebounding instincts. Those are the really good rebounders. We don’t have a lot of great size and we’re not real physical as a whole. He wedges himself in there and knows where it is coming off.”

Believe it or not, something else about Anderson’s game has stood out above his rebounding. You won’t see Anderson’s defensive statistics in the box score, but that’s where he is quickly earning a reputation as Iowa State’s MVP.

“He has been extremely physical,” Hoiberg said. “He gets it. He understands team defense. He knows when he can help. He needs to stay close to his guy. He gets right up into him and contests shots.”

BREAKING DOWN THE BULLDOGS

Drake has one thing that this Iowa State team has yet to see this season. That is an actual frontcourt. How will Iowa State respond when Seth VanDeest, a honorable mention preseason All-MVC player posts up for the first time on Wednesday night? I honestly don’t have a clue.

Will Jamie Vanderbeken hold up or will Calvin Godfrey be the guy assigned to do the the dirty work? This one big question is why I think this could be a close and entertaining basketball game. I’ll add to that if Iowa State has problems with Drake in this area of the game, it could be a long season.

“They shoot the ball tremendously well. They get the ball out in transition and shoot a lot of threes,” Hoiberg said. “I think that Drake is a program on the rise. They have a very good group of young players mixed in with some veteran guys who can really shoot it.”

Drake defeated Texas Southern 60-46 in their opener last Saturday. Ryan Wedel led the way with 20 points, while going 6-of-12 from 3-point range. I assume that Iowa State will get Jake Anderson in Wedel’s face early and often in this game.

Keep an eye on the name Aaron Hawley, a 6-foot-8 sophomore, who came off the bench to score 15 points in Drake’s win.

I’m anxious to see Drake’s highly touted freshman guard Rayvonte Rice in organized action. I watched him play in the Capital City League this summer and wasn’t blown away. But let’s keep in mind here that the Capital City League makes guys like Alex Thompson appear to be superstars. Take what you see there with a grain of salt. Rice, an Illinois native, scored six points in his Drake debut on Saturday.

– Expect to see more of DeMarcus Phillips on Wednesday. Phillips made it through is first full practice on Tuesday, since he broke a bone in his hand back in October. Phillips played seven minutes and scored four points in Sunday’s win over Alabama State.

“It was very good for him to get in there for the first time with the fans in the building and the lights on,” Hoiberg said. “I thought that he did a nice job. He got up and down the floor and got a couple of layups.”

–       Iowa State’s three seniors (Garrett, Anderson, Vanderbeken) have accounted for 57.2 percent of the team’s scoring so far this season.

–       Drake has won the last two games that these programs have played in Ames. Last year in Des Moines, former Cyclone Lucca Staiger made 10 3-pointers to lead Iowa State to the 90-70 win.

–       If it means anything, Fred Hoiberg never lost to Drake during his four years as a player at Iowa State.

This quote from Fred Hoiberg says a lot about this year’s Iowa State men’s basketball team.

“If we play like we have these last two games all year long where we come out with heart and energy, concentrate on the defensive end and play unselfish basketball, then we are going to surprise a lot of people this season.”

This is going to be a nice little test for the Cyclones. Drake is better than Alabama State. I’m not sure if they’re superior to Northern Arizona or not. After all, the Bulldogs were picked to finish eighth out of 10 in the MVC’s preseason poll. At some point, the Cyclones are going to slow down their hot 3-point shooting (currently 47.2 percent downtown). When that happens, how will Iowa State respond? How will the Cyclones defend Drake’s presence in the post? Seth VanDeest certainly isn’t Cole Aldrich down there for the Bulldogs but he’s at the very least an adequate big man. Iowa State has more talent than Drake. They have the home court advantage and really for the first time this season, Hilton should be rocking. I see Drake keeping this one close for about 30 minutes. I like Iowa State to run the Bulldogs out of the gym to pick up a comfortable double-digit victory.