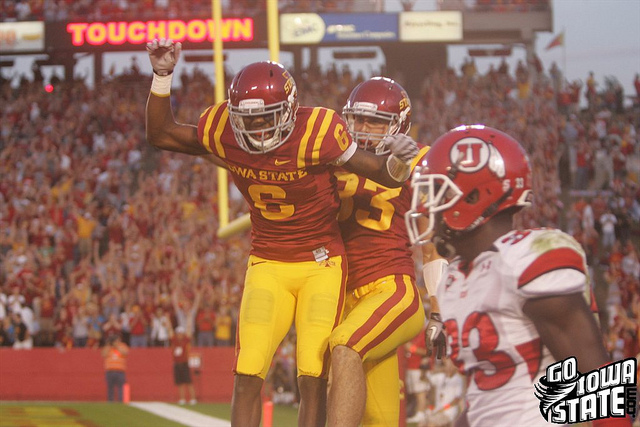 Remember the device used in the Men in Black movies that instantly clears any short-term memory you have? I needed one of those "neuralyzers" after the Utah game. And I imagine several of those in the Cyclone football offices would have liked Will Smith and Tommy Lee Jones to stop by for the same reason.

(Side note: Men in Black III is currently in production and slated to come out in 2012. I can only assume the plot revolves around an alien disguised as a pop star that is taking over the world one bad song and one bad outfit at a time. And believe it or not, this would be a true story. Let’s hope the boys finally get rid of Lady Gaga once and for all.)

At halftime on Saturday, Jack Trice was shell-shocked. As I was sitting there trying to process what I had just seen unfold in the 2nd quarter, the post-newscaster-fight scene in the movie Anchorman kept running through my head:

Ron Burgundy: Boy, that escalated quickly! … I mean, that really got out of hand fast.

Champ Kind: It jumped up a notch.

Brick Tamland: Yeah, I stabbed a man in the heart.

Ron Burgundy: I saw that. Brick killed a guy. Did you throw a trident?

1. I will never trust a guy named Shaky ever again.

2. If I am ever in search of having a son that turns into an interior lineman (and goodness knows that’s always been a dream of mine), I am moving to American Somoa and befriending the local women.

3. I hope the Cyclones don’t let one loss turn into six.

The third part is easier said than done. Before the year started it was theorized that Iowa State had the potential to get to another bowl game. The huge caveat being "IF" they didn’t get demoralized with the brutal October.

A trip to Norman to meet the sixth-ranked Sooners is not a good way to get healthy. It’s akin to running the Des Moines Marathon the morning after an all-night bender with Lindsay Lohan.

But as Paul Rhoads would say, "These are the pancakes we’ve been served, we might as well put syrup on them."  (OK…he probably wouldn’t say that, but it would be awesome.)

The trip Saturday actually presents a unique and, perhaps, final opportunity for the Cyclones. This is more than likely the last time they will play a ranked team on the road in the current-look Big 12 conference.  And up until this point, the Cyclones are 0-19 on the road against ranked Big 12 foes.

In fact, Iowa State has only three road wins against ranked teams in the history of college football polls dating back to 1938. Can you imagine being a voter back in the late ’30s?

Back to the point. Yes, Iowa State has yet to win a game on the road against a ranked Big 12 opponent in the 14 year history of the conference. And in that stretch there have been some doozies. Not to belabor the pain, but here are a few of my favorites. Close your eyes if you start feeling queasy.

November 15, 1997 @ #3 Nebraska. Lost 77-14. So you thought the second quarter against Utah was bad? This contest was so one-sided, even that wacked-out blow-up doll Lil’ Red felt a little guilty for celebrating. Nebraska led at half-time 63-7. SIXTY THREE POINTS IN ONE HALF!! Ahman Green had 209 rushing yards at that point and Nebraska had their third-teamers on the field by the third quarter. Ouch.

November 4, 2000 @ #19 Kansas State. Lost 56-10. Even the Iowa State squad that had the most wins in school history got pounced on the road. Sage, J.J., Brunsie and the crew were coming off a bowl-clinching win against Mizzou the week prior. Only to be ambushed by K-State and a Wildcat team that was stinging after losing their previous two games. Josh Scobey ran for 150 yards and 4 touchdowns and it was 49-3 a few minutes into the 3rd quarter.  Less than enjoyable.

October 19, 2002 @ #2 Oklahoma. Lost 49-3. Let me set this up properly for the newly-minted Cyclone fans. Believe it or not, Iowa State entered this game ranked #9 in the country. Read that again. Yes, it happened, for real. Iowa State was in the top 10 for the first time in school history. They were 6-1 and riding high after defeating Texas Tech 31-17. Seneca Wallace was atop every single Heisman ballot for his amazing first half of the season, capped off by "The Run." A show-down with OU was billed as the biggest game in Cyclone football history.

I drove down to Norman with some friends and family hoping to witness a historic win. The morning of the game we stopped at a gas station to fuel up on supplies and victory cigars. An old cowboy-looking dude decked out in Sooner garb, boots and belt-buckle included, saw us as we are leaving and bellows out in a slow southern drawl: "WE GOIN TO BEAT ‘YA’LL 40-OH!"

We laughed and yelled back, "Ok, old man."

In a driving rain-storm, Seneca Wallace went 1-12 in the first half for zero yards and two interceptions. Goodbye Heisman. You knew the game was going to go in terrible fashion after the first series. After failing to move the ball at all, Iowa State sent Tony Yelk out to punt and a big bucket of failure ensued. Here is how the Associated Press described it:

Derrick Strait set up Oklahoma’s first touchdown when he raced in from the left side to block Tony Yelk’s punt less than a minute into the game. The ball rolled into the end zone and was on its end spinning when Iowa State’s Anthony Forrest ran toward it.

But instead of kicking it out of the end zone or falling on it for a safety, he ran right past it, whiffed on his kick attempt and Oklahoma’s Terrance Sims dove on the ball for a touchdown.

OU led 35-0 at half and had out-gained the Cyclones 225-4. The good guys ended with a measly 60 total yards, their fewest since 1943. It was one of the most miserable days I can remember. And after that, the Cyclones once promising season fell into disarray. They finished the year with a 1-6 record, including a home loss to new FBS team Connecticut. The hangover carried over to 2003, when Iowa State finished 2-10.

Now, almost eight years to the day later, the Cyclones are in the middle of a similar brutal stretch of games. How will they respond?  We know this team has hung together through some very difficult times. Say what you want about Austen Arnaud’s performance on the field, but he is a great leader with a lot of heart. He’s going to need all of that and more to keep Iowa State afloat for the next few weeks. The season, and in some capacity, the positive momentum of Cyclone football program are on the line.

I leave you with some positive thoughts. The Cyclones are 1-38-1 against the Sooners since 1962. (I know, I know, that is far from positive. Stay with me.)

But that one win came on the road in 1990. A 33-31 victory on October 20, 1990. That was also the last time Iowa State beat a ranked team on the road. Now 20 years later, the Cyclones meet up with a ranked Big 12 foe for the 20th and, perhaps, last time. It seems like as good of time as any to shock the college football world.

It leads to the saying I model my life after, "WWJWD" (What would Jim Walden do.) If Walden can defeat a ranked OU team in Norman, so can Paul Rhoads.