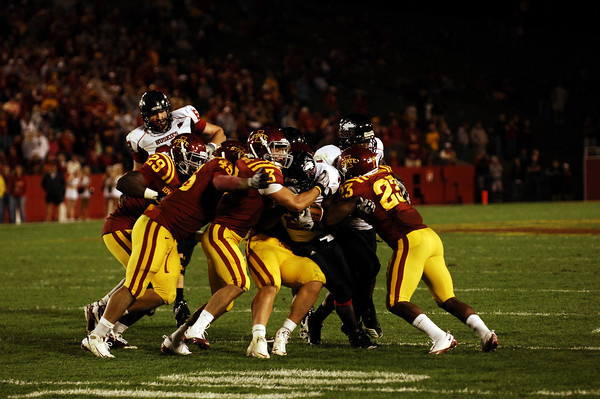 AMES – The Iowa State defense is making itself at home in an unlikely place – the opponent’s end zone.

Chalk up two more defensive touchdowns for the Cyclones in a 27-0 victory over Northern Iowa on Saturday night. Three times in the last two games, Iowa State’s turned an interception into six points. Jeremy Reeves and A.J. Klein both did the trick against the Panthers.

“You can talk bad about (the defense) all you want,” Iowa State coach Paul Rhoads said. “We understand we are young. We understand we are inexperienced. But what you need to understand is that we come to work everyday. We are trying to do our jobs to the best of our ability. They were pretty commendable tonight.”

The Cyclones forced five UNI turnovers and allowed 320 yards of total offense in the win. The shutout was the first since 2004 for Iowa State. Coincidently, that also came against the Panthers.

The effort showed a marked improvement from the 845 combined total yards Iowa and Kansas State rolled up on the Cyclones the previous two weeks.

“(The defense) has been lacking for the last couple of games,” Rhoads said. “To respond and get (the turnovers) like we did, and to have three defensive scores in two games, it’s pivotal to a team’s success.”

Jeremy Reeves stands only 5-foot-7, 168-pounds, but that didn’t stop him from making arguably the biggest play of the game. With the score 13-0 and the Panthers driving well into Iowa State territory, Reeves snagged a wobbly floater from UNI quarterback Zach Davis. When he looked up, there was nothing between him and the Cyclones’ goal line 94 yards away.

“I was reading the quarterback,” Reeves said. “He was looking my way the whole time. He was throwing to (Ter’ran Benton’s) man and I just came and picked it off.”

The 94-yard return tied for the second longest in Iowa State history. Dick Howard owns the record with a 100-yard jaunt for a touchdown against Kansas State in 1945.

“I saw him throw and I just knew I was going to get the pick. I was thinking about catching it first and taking it to the house. That’s what I did.”

Give an assist to Iowa State defensive lineman Stephen Ruempolhamer. The Cyclones continually harassed the Panther quarterbacks throughout the game. On Reeves’ interception, Ruempolhamer’s pressure forced Davis to throw the ball quicker than he wanted.

“When the D-line is always in a quarterback’s face, it makes it easy on the (defensive backs),” Reeves said “That’s really what happened on that play.”

No, really, A.J. Klein does play linebacker for Iowa State. It’s easy to confuse the sophomore for a tight end the way he keeps taking passes into the end zone. For the second-straight game, Klein ran an interception back for a touchdown.

This one came in dramatic fashion. Two plays after leaving the field with a minor neck injury, he jumped an out route and sprinted untouched 25 yards for another score by the Iowa State defense giving the Cyclones a 27-0 advantage.

“I saw it the whole way,” Klein said. “I saw the quarterback looking back across (the field) and I just had to jump it and make a play.

“It’s exciting. It feels good. It’s a great feeling to be able to score a touchdown. Everybody wants that interception, but to top it off with an touchdown makes it even better.”

Grant Mahoney is known for using his legs on the football field, just not the way he did late in the second quarter. After drilling two field goals earlier in the game, Mahoney lined up for his third attempt.

Mahoney and holder Daniel Kuehl fooled every Panther defender by darting to the right on a fake field goal. Kuehl made a perfect pitch to Mahoney who dashed down to the UNI 19-yard line for a crucial first down. Four plays later, Alexander Robinson plowed into the end zone for a 13-0 lead.

“(When they called the fake), I got real big eyes,” Mahoney said. “I was just trying to get the first down and get out of bounds.”

The big plays kept coming for Mahoney. On the ensuing kickoff, the junior ran down Northern Iowa’s Carlos Anderson at the 46-yard line – a touchdown saving tackle. At game’s end, Mahoney racked up nine points, including field goals of 46 and 37 yards.

“He is a consistent player,” Rhoads said. “He’s playing exactly like we thought he would.” 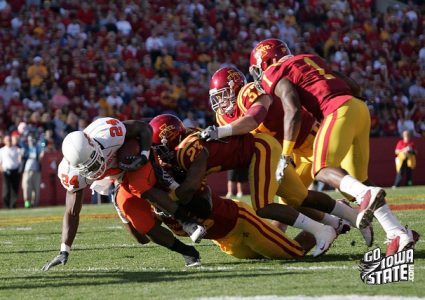