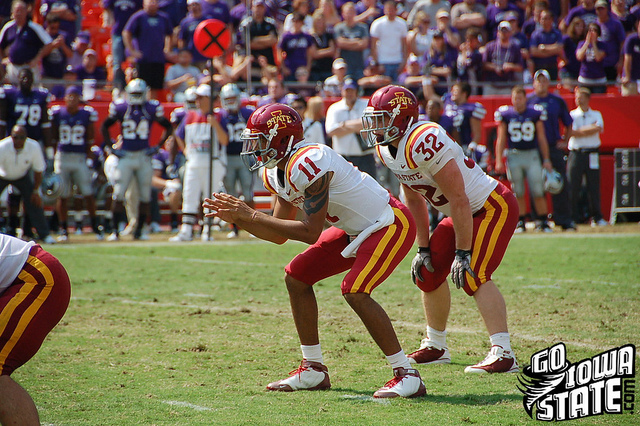 AMES – Three plays and one series is all it took for Iowa State fans to get a taste of Tiller Time.

The redshirt sophomore quarterback entered Saturday night’s game for an injured Austen Arnaud and helped lead the Cyclones to a 27-0 victory over instate rival Northern Iowa. Tiller finished 11-of-22 passing for 87-yards.

The effort certainly wasn’t flawless, but in the end, it got the job done.

“(Tiller) didn’t play a perfect game,” Iowa State coach Paul Rhoads said. “I didn’t coach a perfect game. Nobody out there did. There’s room for improvement for everybody and Jerome’s included in that. Overall, I think he did an admirable job of leading our football team to victory.”

Arnaud originally injured his left shoulder in last week’s 27-20 loss to Kansas State. Unfortunately for the Cyclones, it didn’t take him long to aggravate it. Iowa State went three-and-out on its first possession and Arnaud was done for the night after taking a big hit.

Insert Tiller. The San Antonio native only completed one pass for nine yards on his first possession, but the Cyclones offense moved the ball down the field. Kicker Grant Mahoney capped off a 12-play, 59-yard drive with a 37-yard field goal to give Iowa State a 3-0 lead.

“(Tiller) certainly didn’t lose the football game,” Rhoads said. “When I say that, he kept us moving. He got us down the field. We got field goals out of a couple drives.”

With Arnaud’s status for next week up in the air, who will start at quarterback next Saturday when Texas Tech visits Ames is anyone’s guess. Don’t count on Rhoads tipping his hand before then.

“I think we take it day by day and see Austen’s health and see how Jerome grades out and go from there,” Rhoads said. “That’s no way a statement that Jerome’s grade alone will push him to the starting position. I think we have to look at both things – health and how (Tiller) played and compare the two young men.”

So if there’s a quarterback controversy brewing in Ames, you won’t hear Rhoads saying a peep about it.

Running back Alexander Robinson, who carried the ball 15 times for 81 yards and a touchdown on Saturday, had this to say:

“There’s not much of difference. They are both intelligent players. They are both trying to make the right decision all the time. I guess Tiller is not as big as Arnaud, but he’s a little quicker. That brings a different dimension. He’s more a scrambler.”

Whoever is under center, it’s clear the Iowa State offense will need to improve before the Red Raiders come to town. The Cyclones used a short field to score their next 10 points and take a 13-0 lead, but nothing came easy. When the final horn sounded, Iowa State gained just 210 yards of total offense – 93 of which came through the air.

But what about if Arnaud is healthy – who gets the start? 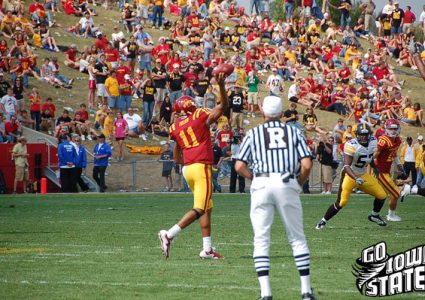