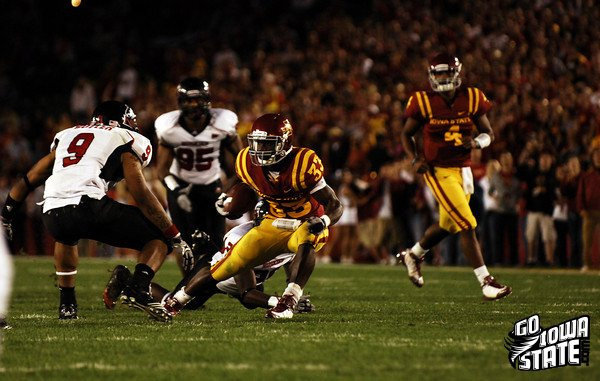 Driving home on the catastrophe known as I-80 after the game Saturday gave me quite a bit of time to think. I thought about how Iowa City could mix in an extra road or two from Kinnick to the interstate and how the "hit-music" radio stations always seem to play some alternating combo of Katy Perry, Lady Gaga, B.o.B and that jack-knife who says over and over, "I WANT TO BE A BILIONNAIRE SOOOOOO FREAKING BAD!!!" And truth be told, listening to Usher’s "OMG" was a pleasant respite from the multitude of Hawkeye post game call-in shows.

But in between listening to Nickie Minaj and Taio Cruz, I thought about what’s missing with the Cyclone football team.

And it hit me. Iowa State is missing explosiveness like Ke$ha is missing the letter "s".

In Gene Chizik’s first spring game, he had this bizarre, convoluted scoring system that awarded points for what he termed, "Cyclone yards." It was one of several strange ideas he had (see: hiring Wayne Bolt), but it stuck with me. If the offense passed for 25 yards or more or ran for 15 yards or more they got extra points. It was a novel concept. Emphasizing big plays would lead to quicker, easier scores.

I’ve since heard this stat (passes greater than 25 yards, runs greater than 15 yards) categorized as "explosive plays." I’d prefer MacGruber’s or Milton Bradley’s, but explosive plays works fine.  As my pal Chip brilliantly suggested, if this stat ever goes mainstream there is an obvious sponsor. I can hear Brad Nessler now:  "Now let’s take a look at the Taco Bell explosive plays of the game."

So I decided to get my Elias Sports Bureau on and dig into the numbers to figure out if there is something to this perceived lack of explosiveness. My premonition was correct.

In Iowa State’s 1st two games they have had just four explosive plays:

Arnaud’s 34 yard completion to Colin Franklin in the 3rd quarter.

Arnaud 27 yard pass to Darius Reynolds in the TD drive in the 4th quarter.

And that is it.

To put that in perspective, Michigan’s Denard Robinson is responsible for 12 explosive plays by himself in the first two games of the season.  Robinson may also cause Steve Deace to combust in excitement on the air one of these days. He’s that good.

At the half on Saturday, the Cyclones had generated one play over 10 yards. That was a 12-yard pass to Sedrick Johnson. It’s as if Iowa State is playing 1980’s hit and run baseball, while other teams are in the steroid era.

You may be saying, "c’mon Blum two games is way too small of sample size." Very true. So, I went thru the game logs for every game last year. (It was a fun way to spend a Sunday. But it beat watching Lady Gaga dressed up as a whack-job on the VMA’s.)

Most telling was the importance of Alexander Robinson. He was involved in 26 of the 49 explosive plays. Also worth noting, Cyclone punter Michael Brandtner had more explosive plays (1) than several of the wide receivers and tight-ends.

It seems pretty simple, if you are asking your offense to string together ten to fifteen play drives in order to score, it increases the chance for something to go wrong.

It would ease a bunch of the pressure on Austen Arnaud and the offense if they found someone else in addition to A-Rob with the potential to break plays wide open. In the 15 games of the Rhoads era, the Cyclones have had only three offensive plays over 50 yards. And an additional five more over 40 yards.

That said, there is no magic solution to tell guys to get faster or break more tackles. And no scheme that can automatically induce 30-yard plays.

If you aren’t generating big plays on the offensive end, an opportunistic defense and special teams can help bridge the gap and score points. But despite all of the turnovers Wally Burnham’s crew produced last year and the solid play of the special teams, the Cyclones had zero non-offensive points in 2009. No interceptions for touchdowns, no fumble returns for TDs, no punt/kick returns for TDs, no blocked kicks for TDs and no safeties.

In fact, the last non-offensive points Iowa State generated came on a deliberate Iowa safety in 2008 when the Hawks snapped it out of the end zone on purpose. Two years is a long time. It’s incredibly unlucky and bizarre to go that long without any "bonus" points.  For comparison’s sake, Texas had 10 non-offensive touchdowns in 2009 alone.

In case you were wondering, the last punt return for a touchdown was by Gilbert’s finest, Ryan Baum, in 2006 against UNI. The last kick return for a TD…Troy Davis against Colorado during his freshman year on November 19, 1994! A week after that kick return, Fred Hoiberg opened up his senior year against Illinois State with new head coach Tim Floyd on the bench.  That’s obscene how long it has been.

There were 65 kickoff returns for touchdowns in college football in 2009, yet Iowa State hasn’t had one since "Interview with the Vampire" was #1 at the box office and Boyz II Men’s "I’ll make love to you" was tops on the charts. Those boyz have gone from men to middle-aged men to old-men.

That streak needs to come to an end ASAP.

People can pile on Austen all they want, but it’s a team effort. As the old adage says, "Players gotta make plays."

Might as well start in Kansas City. And hopefully the drive home on I-35 is a little more enjoyable than the one last week on I-80. 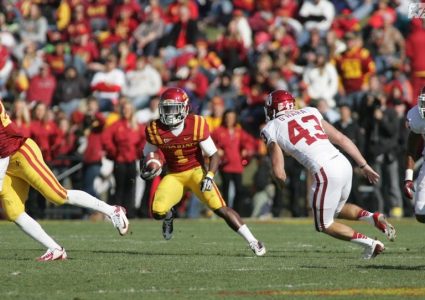 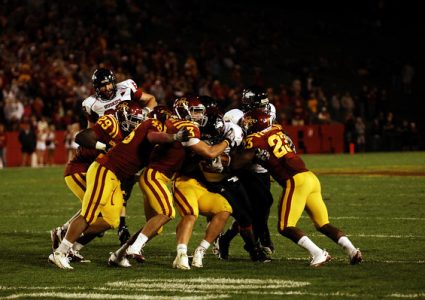