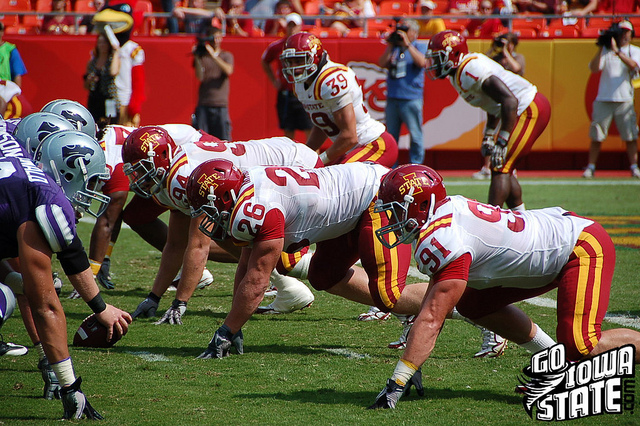 So you don’t like Iowa State’s semi-traditional Thursday night kickoff? You’re in luck,

Iowa State’s athletic department released its 2011 non-conference football schedule this morning and the Cyclones will kick off 2011 on Sept. 3, a Saturday, against Northern Iowa.

“The game against the Panthers will be our first home opener on a Saturday since 2005,” Director of Athletics Jamie Pollard said in a press release. “Although the Thursday night opener has been very successful and popular with our student body and the majority of our fans, we feel pushing the opener back to Saturday night in 2011 is an opportunity to show those fans that struggle making a Thursday night game that we are trying to accommodate their needs as well.”

The Cyclones were supposed to start the season on a Thursday night at Utah. According to a release, that game has been cancelled.

“The changes to our football schedule are the result of the recent conference re-alignment moves that have affected several leagues across the nation,” Pollard said. “Moving to a nine-game conference schedule in the Big 12 required us to drop a non-league game. Utah was in a similar position with its move to the Pac-10 so we’ve agreed to drop the 2011 game with the Utes.”

On Sept. 10, the Iowa Hawkeyes will come to town. Then on Sept. 17, Iowa State will head east to take on UCONN of the Big East conference.