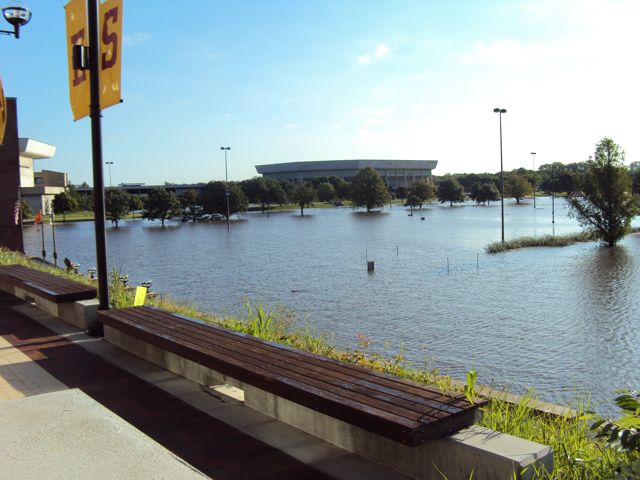 Hilton Coliseum should be open and ready for business when the Iowa State women’s basketball team begins its season on Nov. 4 against Minnesota State-Mankato.

The bad news is that Iowa State officials are still unsure of what shape the arena will be in at that time. There’s a tremendous amount of work to do to Hilton before the basketball season tips off.

For example, the roughly 2,500 retractable seats around the arena circle must be replaced. The lead time to get new seats is 18 weeks, well past the Nov. 4 opener.

“The first message is to keep everything in perspective,” Iowa State Athletic Director Jamie Pollard said. “It’s certainly a challenge. It’s a challenge that none of us would wish upon anybody, but we will get through this. Our coaches, our student-athletes and our staff have a lot of resolve. As we’ve met with the individual teams and coaches, they’ve embraced it. They embrace it as a challenge. We’ll find a way to be stronger from it.”

On Thursday morning, Iowa State officials updated the status of campus and university buildings affected by last week’s flooding. In total, 26 buildings showed storm damage. Five of those were hit hard by the flood, including Hilton Coliseum which saw the worst of the damage.

Officials still don’t have an estimate of the cost of the damage, but it will be significant Iowa State President Gregory Geoffroy said.

To combat the damage, Iowa State hired two disaster cleanup companies. The scale of the project is so large, the university is spending $18,000 a day on fuel to power trucks, generators, dehumidification equipment and more, David Miller, Director of Facilities Planning and Management Operations said.

The water and muck left by the flood inside Hilton has since been removed. Also gone is wet sheetrock and carpet. Power remains out at the 39-year-old facility. Restoration of Hilton will go on into the fall and possibly longer, Geoffroy said.

While severe flooding has affected Hilton twice in the last 17 years, there is no active discussions to relocate the historic venue, Warren Madden, Iowa State Vice President for Business and Finance said. In fact, there is likely zero chance of that ever happening.

Now, repairing Hilton and getting it ready for basketball is Iowa State’s No. 1 priority. Unfortunately, the flooding leaves the ninth-ranked Cyclones volleyball team with a new home this fall. Coach Christy Johnson-Lynch’s squad will play its 2010 schedule at Ames High School, Pollard said.

“We going into it with plans to be at Ames High the entire year,” Pollard said. “If we are in a fortunate situation to bring the team back to Hilton, we’ll make that decision at an appropriate time.

A smaller gym could provide the Cyclones with an even bigger home court advantage.

“That’s how the volleyball team is approaching it,” Pollard said. “You have too. You can’t worry about what you can’t change. The fact of the matter is, crowds in there will seem much louder and larger because you have a smaller seating capacity. Our goal is to sell it out every game.”

One of those matchups is slated for Sept. 15 when Iowa State hosts rival Nebraska. The game is scheduled to be televised by ESPNU at Ames High School. Will that still happen? Pollard thinks so.

“We are pretty certain it’s still going to be on ESPN. They haven’t been in the Ames High School for awhile, so they don’t know what the production is. (Ames Athletic Director) Judge Johnston is working with them on getting them the information they need from a technical standout. The game is going is be at Ames High and we anticipate it will still be on ESPN.”

No problems for football opener

Don’t worry, tailgaters – Iowa State officials don’t anticipate any problems for the football home opener against Northern Illinois on Sept. 2. Thanks to the hard work of football players who helped sandbag, there was minimal damage to the Jacobson Building and Jack Trice Field.

While Pollard spoke at the Jacobson Building, crews were busy getting the Iowa State Soccer Complex in playing shape. Workers cleared debris and reseeded the field on Thursday.

“There’s a fairly good chance they could be back on campus in three weeks,” Pollard said. “Maybe not in full capacity with the locker rooms and such, but hopefully the field is ready to go by then.”

The Cyclones will play Friday’s home game against Drake at the Prairie Ridge Soccer Complex in Ankeny. If all goes to plan, the Sept. 17 date with Iowa should be back home at the Iowa State Soccer Complex.

For detailed information about the flooding visit, www.iastate.edu/Inside/2010/0819/status.php 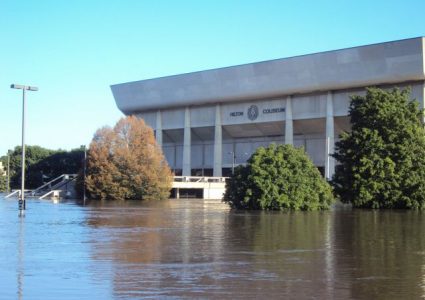 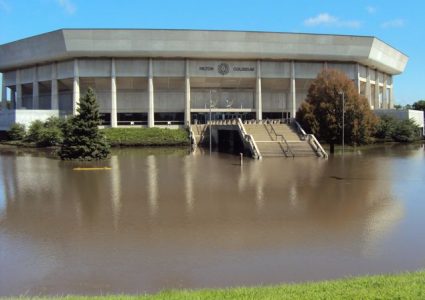