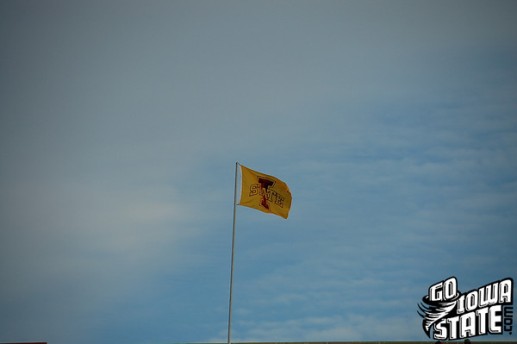 Just a little FYI here to start your day, I will be posting this week’s CF Mailbag column later on this afternoon. Normally on days that I post a mailbag, I don’t write a blog. There are a lot of hot topics that need to be touched on today, so here we are.

Before I go there, I do want to take care of a little housekeeping. I will be filling in for Jon Miller on 1460 KXNO all next week from 6-8 in the morning with Steve Deace. I’m sure that we’ll talk a lot of Iowa State so be sure to tune in.

Also, I regret to inform you all that I won’t be able to make the trip out to Dayton this weekend to cover Iowa State’s women’s basketball team in the Sweet 16. My sister recently had twins and the game happens to be on the same day as their baptism. I am the Godfather. Family first right?

I guess this is a good place to start the real portion of this blog, before I dip into the Justin Hamilton saga that has taken over CycloneFanatic.com over the past few days.

So the women get top-ranked and unbeaten UCONN on Sunday. In my opinion, this is an awesome thing for Iowa State. Here’s why.

Raise your hand if in November, you thought this team would be playing on March 28? Exactly. This team has already exceeded expectations. They’ve grown. They’ve inspired us all. They’ve been incredibly fun to cover, watch and cheer for.

Why not take on the best? Why not gather as many national headlines as you can? If you hadn’t noticed, the Clones are all over ESPN, SI.com etc. That is a good thing for this basketball program.

Iowa State is one of five teams to qualify for the Sweet 16 over the last two years. This program is a national power.

Bring on the Huskies.

So former Cyclone Justin Hamilton wants to play closer to home huh? Let’s go back to March 12 for a minute.

“I appreciate everything the Cyclone Nation has done for me,” Hamilton said in a release. “The fan base, my teammates and the support of the community at ISU has been incredible, but I just feel I need to be at a school closer to home where my family will have a better opportunity to watch me play. I appreciate everything Coach McDermott and the coaching staff has done for me. They have helped me improve as a player and person.”

Earlier this morning, I reported that Hamilton has narrowed his list of schools down to Virginia, LSU and UCLA. Sources tell me that Hamilton has already turned down offers from BYU, California and Washington State. Things that make you go ‘hmmm.’

Okay, if Hamilton goes to Virginia or LSU, somebody has a lot of explaining to do. It doesn’t take a math major from the great Iowa State University to realize that this doesn’t all add up.

One of our brilliant posters, 12alphmacchio, did some number crunching earlier today. Here’s what he came up with in regards to mileage from Utah.

In his blog yesterday, Randy Peterson of the Des Moines Register reported that Justin told an Iowa State media relations employee that he doesn’t want to talk to reporters right now.

I respect that and I won’t stalk Hamilton trying to get a good quote. There is no need to. I do know this though as I know how reporters are. If he goes to Virginia or LSU, att some point, somebody is going to ask Justin about this.

I don’t have enough information at my disposal on this topic to roast anybody here, be it Hamilton or Iowa State. I’ll stay neutral. But no matter how you want to approach it, this story doesn’t add up.

Johnson-Lynch has led Iowa State’s volleyball program to three straight Sweet 16’s and was the 2009 Big 12 Coach of the Year.

Read more details about this story by CLICKING HERE.