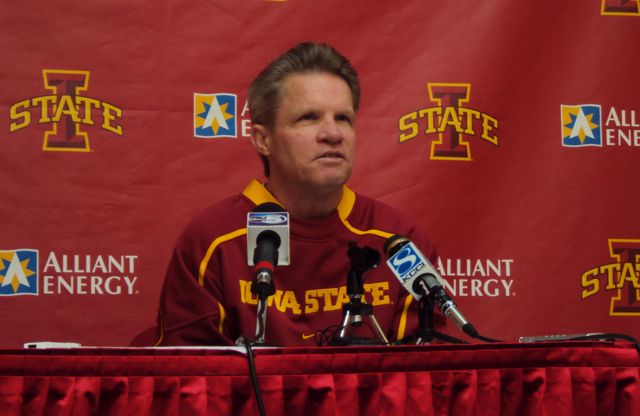 Last night’s Iowa State NCAA Tournament victory over Lehigh concluded at exactly 10:56. After post game interviews and what not, Bill Fennelly and his staff returned to their offices at around midnight to begin preparing for round number two.

I’m not sure what time Fennelly woke up this morning but I have reason to believe it was quite early. How’s the coach feeling today?

“Thank God for Diet Mt. Dew and Red Bull,” Fennelly told reporters on Monday afternoon. “It is great to be tired. I left this morning and Deb says ‘you look like hell.’ I took that as a compliment really. Not that I ever look good. That is why you do what you do. It is fun to be tired. It is fun to be working.”

Fennelly and his Cyclone women’s basketball team are now heavily involved in their preparation for tomorrow night’s NCAA Tournament second round game with Green Bay (28-4). The 12th-seeded Phoenix upset Virginia on Sunday night by a 69-67 final.

Here’s the attention-grabbing thing about the Green Bay team. They are a 12-seed in the tournament for a reason. That’s because most “experts” (hint, hint, ESPN) didn’t even have the Phoenix in the tournament. In fact, after losing to Cleveland State in the Horizon League Tournament, they were one of the last team’s to make the NCAA’s.

But Bill Fennelly knows basketball. Fennelly wasn’t fooled by that fact. Yesterday, Fennelly told his son that a Green Bay upset of Virginia wouldn’t be crazy at all. It happened and the Cyclones are ready.

“I’m not surprise that they won the game at all,” Fennelly said. “We had both teams scouted and we had an initial game plan ready for both of them. I’m certainly not surprised by who we are playing. We understand that at this time of year, you are always going to play someone who is pretty good.”

It’s mid-March. That means that every casual basketball fan in America is hoping for one thing. That’s an upset. Green Bay has already pulled off one of these this post season and they will likely be smelling blood in front of a pro-Iowa State crowd tomorrow night.

Fennelly is very familiar with this underdog mentality. Remember that Fennelly was the head coach at Toledo from 1988-1995. He knows what it is like to be in Green Bay coach Matt Bollant’s shoes.

“You never think that you get enough recognition,” Fennelly said. “Green Bay is one of those teams that has been good for a long, long time. They are someone who no one wants to schedule, at Green Bay. You look at your bracket and you don’t want to play them. They have had that reputation for a long time. It has just continued over the years. They are certainly one of those teams who has proven that they are good. This is the time of year when they get extra attention.”

Bollant said today that he’s doing every little thing possible to make sure his team is confident going up against the Cyclones.

“I want to make sure they felt like they can win, no matter what,” Bollant said. “We need to believe we should win. There are certain things we do as a team that we do well that allow us to win. When you believe you should win, you will”

In my mind, there is one way that Green Bay can win tomorrow night’s game. That’ is if the Cyclones put them at the free throw line. Just ask Virginia. In their first round competition, the Phoenix turned the ball over 30 times, yet still pulled off the 12-5 upset. The only want that was possible was because they went 34-for-40 from the charity stripe.

Ironically enough, not fouling is something that Iowa State has stressed all season long.

“I think that tomorrow that is going to be our main focus; if we can guard their players, our forwards are going to play outside, our guards are going to have to guard inside,” Alison Lacey said. “That is the main focus in practice today and tomorrow.”

Iowa State’s senior leader Alison Lacey played 29 minutes to score seven points in her return to the lineup last night. In case you’ve been hiding in a cave, Lacey has been fighting a case of pneumonia for weeks. How does she feel the day after her comeback?

“I could play the whole game tomorrow no matter what,” Lacey said.

Tomorrow nights’ game will tip at 8:30 and can be seen on ESPN2. 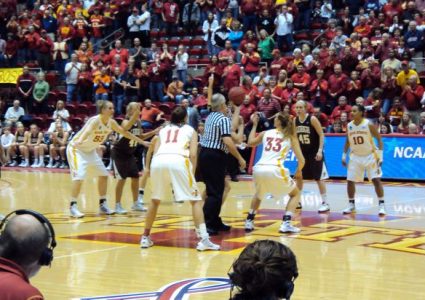 Dominance, Lehigh was no match for ISU