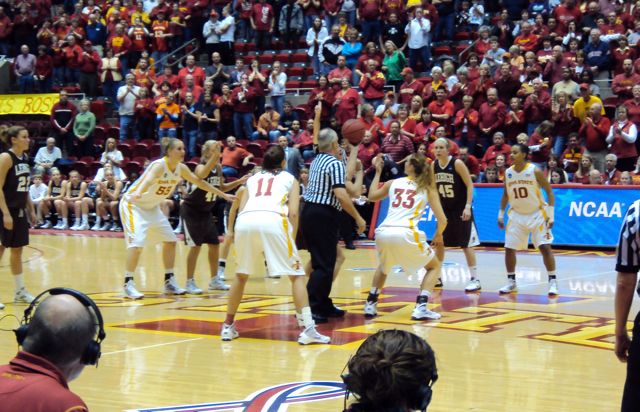 It didn’t take long to realize that Iowa State was going to rout the 2010 Patriot League champs Lehigh on Sunday night. Bill Fennelly’s Cyclones jumped out to a 12-0 lead in the first six minutes of the game and cruised onto a 79-42 NCAA Tournament victory.

It was pure dominance from the opening tip.

“My hats off to Iowa State,” said Lehigh head coach Sue Troyan after the game. “They are one of the top teams in the country. I thought they played a tremendous game on both ends of the floor.”

That they did. Iowa State shot 49.2 percent from the field. That right there is a solid stat, but it is nowhere close to what the Cyclones did on defense. Iowa State held Lehigh to 22 percent shooting on the night, while going 11-for-50 from the floor. Lehigh didn’t score in the game until the 13:39 mark in the first half and that was only a Kristen Dalton free throw.

It was simply an Iowa State defensive masterpiece.

Leading up to Sunday night’s game, a win was expected throughout the Cyclone Nation. It was a four-seed playing a 13-seed. The four should always expect to win. But for the past few weeks, one burning question has occupied the minds of Cyclone Fanatics everywhere.

How is Alison Lacey going to play after missing all of that time with pneumonia? Not a head cold Fanatics. Pneumonia!

Lacey proved from the opening tip that she was just fine.

Her seven points and seven assists on didn’t blow the casual fan away, but the fact that Lacey played all 20 minutes in the first half is fairly amazing if you think about it.

“I felt good for the most part,” Lacey said. “I’m happy to be out there with my team and to play in Hilton again is great.”

Lacey played 29 total minutes in the game and her teammates were more than glad to have their general back on the floor.

“She’s a great leader,” freshman post Chelsea Poppens said after the game. “We’re really comfortable with her. She’s had a lot of years experience. It’s great to have her presence out there.”

“We built up to this all year,” said Fennelly. “This is their first experience and they don’t want to let the seniors down. Anna had a good game start to finish. (Amanda) Zimmerman played great. Poppens had a tremendous second half. They did everything you can ask and more. All you can do is make the plays you’re asked to make and they did that.”

– The official attendance on Sunday night was 6,738. That number was the nation’s second-highest 2010 first round attendance total behind Tennessee, who drew 10,922 fans.

– Lehigh’s 42 points was their worst offensive performance of the season. Their 22 percent shooting mark was also a season low. As you’d expect, that mark was a defensive season-best for Iowa State.

Up Next: A scrappy Green Bay team

I’m not sure if there is technically such thing as an ugly win for a 12-seed that knocked off a five. If there is, that’s exactly what Green Bay accomplished in their 69-67 victory over Virginia Sunday night.

First of all, the Phoenix turned the basketball over a whopping 30 times! That is their season-high in turnovers and somehow, they still managed to pull off the NCAA Tournament upset. The Cavaliers stole the ball away from Green Bay 22 times. Virginia gave the ball away 19 times. For all of you non-math majors out there, that’s a total 49 giveaways in the game. Sloppy, sloppy, sloppy.

How do you overcome turning the basketball over 30 times in the NCAA Tournament? Start taking notes from Green Bay. You go 34-for-40 from the charity stripe.

The turnovers were a crazy stat. Here’s another one for you. Green Bay didn’t make a field goal for the last 12:17 of that game.

Common sense says that Green Bay will have to clean a few things up if they want to knock off Iowa State in Ames on Tuesday night to advance to the Sweet 16.

Another interesting note about this Green Bay team is the fact that most women’s basketball experts across America didn’t even have them in the NCAA Tournament.

“We try to instill that we deserve to be here,” said Green Bay guard Kayla Tetschlag. “We had a good season and the committee rewarded us. Our coaches did a really good job preparing and pumping confidence into it. That led into the game and we played with confidence.”

Green Bay was the lowest seed to win a first round game in this year’s NCAA Tournament. Joining the Phoenix in crazy first round upsets today were Arkansas-Little Rock and San Diego State, both 11 seeds with wins over Georgia Tech and Texas.

Iowa State and Green Bay will tip at 8:30 on Tuesday night and can be seen on ESPN2.