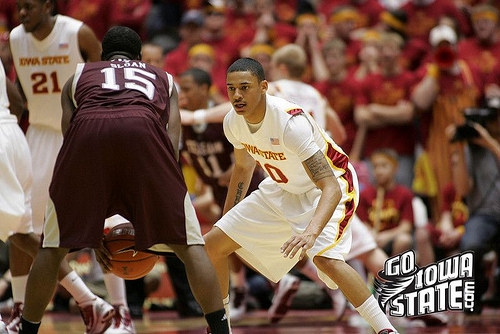 Iowa State and Colorado are both sitting with three wins in Big 12 Conference play. That means that the winner of tomorrow’s game will more than likely be the 10th seed in the upcoming conference tournament.

Iowa State defeated Colorado by a point back on Jan. 30. However, the Cyclones have only won once in Boulder since the year 2002.

Will Iowa State take advantage of a struggling Colorado team? Let’s break it down.

Breaking down the Buffalos

If you think about what Colorado did the last time they were in Ames, it is pretty impressive. It is scary for Iowa State fans. Colorado’s second leading scorer, freshman Alec Burks, went down with a knee injury in the first few minutes of the game and the Buffs still nearly knocked off the Cyclones, losing by just a point. Burks is the Big 12’s leading scorer among freshmen averaging 16.7 points per game.

Now, Colorado has lost six of their last seven basketball games, including a 29-point debacle against Missouri on Wednesday. It’s gotten so bad in Boulder that teammates are now throwing each other under the bus. Here’s a Randy Peterson link with more on that.

In the first meeting, like he does against most opponents, Cory Higgins really hurt Iowa State. The 6-foot-5 junior dropped 21 on the Cyclones while going 7-of-17 from the field. Higgins is averaging 18.0 points per game, a mark that ranks him fifth in the Big 12.

Another alarming stat about the first meeting between these two teams is the fact that Colorado only shot 34.4 percent from the field. With a little better of a night shooting, the Cyclones would only have two conference wins at this point in the season. It is also noteworthy that Colorado made nine 3-pointers in that game, compared to one by Iowa State.

Craig Brackins arguably had his best outing of the year against Nebraska on Wednesday night, scoring 11 points in the final 5:50 of the game to help the Cyclones overcome a 10-point second-half deficit. Brackins’ most encouraging stat line was the fact that he went 7-of-12 from the field.

This all happened after the two went a combined 13-for-57 from the field against Oklahoma State and Texas A&M last week.

When those two are making shots, the Cyclones will have a chance to win any game that they are in. Of course, Scott Christopherson’s emergence as a scorer has definitely helped free up the pair down low. Christopherson scored 17 points against Nebraska and he’s now 37-of-85 from 3-point range this season. That’s a 43.5 percent mark, which is the seventh-best single-season total in Iowa State history. In the last three games, Christopherson has averaged 14.7 points a game.

Shooting is the key for Iowa State. The Cyclones have been playing much better defense as of late. They are rebounding better. They are knocking down free throws. Turnovers haven’t been an issue. Before Wednesday, Iowa State had gone five straight games shooting the ball under 40 percent from the field.

You can’t win if you don’t score points. That’s where Brackins and Gilstrap are so important to a depleted roster.

As far as talent goes, Iowa State is a better basketball team than Colorado. There is no doubt in my mind about that. But it is Boulder that makes me very nervous about this one. The fact that the Buffs appear to be falling apart is a definite plus for Iowa State, on the surface at least. But it always seems like teams come together when the Clones come to town.

I am of the opinion that this one could go either way. I could definitely see Iowa State coming away with an impressive victory. I can also see them losing in a last second defeat. All I know is that this is a game that Colorado has circled on their calendar as a “must win.”

I think that that Buffs will regroup and that the Cyclones will go down swinging.