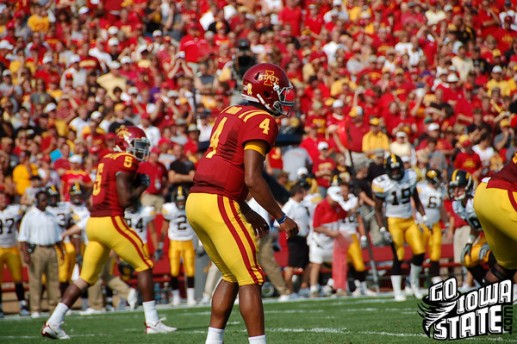 The quarterback. It’s the guy who gets the glory. It’s also the guy who catches the most criticism. Who will be Iowa State’s signal caller next season? The odds are that it will be senior Austen Arnaud. But the Ames native does have two men who are currently breathing down his neck. Here’s part one of my recent interview with Iowa State’s offensive coordinator Tom Herman, where we talk all things quarterback here at CycloneFanatic.com.

CF: When you look back at Austen Arnaud’s junior season, did he show you enough to prove to you that he can really click come next year?

TH: Yes. I think that he can. Whether he is going to or not, will be a decision that is made by him and the choices that he makes in this offseason and spring and how far he works himself into it and dives into it. The last two games that we played against Missouri and Minnesota, he finished with right at or above 70 percent completion percentage. Obviously, the thing that sticks out are the turnovers. If you are completing 70 percent of your passes, if he doesn’t turn the ball over, we are feeling a lot better about how he played and the progress that he has made. I think that the biggest thing for him is going to be the consistency in not only his decision making, but the thing that will help his decision making be easier will be his mechanics. His mechanics are all over the place, all of the time. They are different from snap-to-snap, which leads him to feel sometimes uncomfortable back there. That leads to bad decisions. He is certainly capable of it. We have another guy who is capable of it too, in Jerome Tiller. We will see who decides and makes that decision that they are going to be the guy who we can count on the most. Obviously, with Austen’s experience and leadership ability, he certainly has that opportunity. I told him this. “I can make a 20-play highlight tape of you and convince everybody that you are an All-American. I can make a 20-play lowlight tape of you that will convince everybody that I should retire from coaching and never step foot on a football field again. I’d rather make a 100-play tape of you and show everybody how consistent you are, rather than being so high on one play and so low on another. Let’s maintain a level of consistency that is there. You just have to bring it out every play.”

CF: Jerome got a lot of quality playing time this year. Did he show you enough ability to prove to you that if he proves himself, he could step ahead of Austen?

TH: I think so. Yeah. Experience does play a big part in that position. Jerome is obviously behind Austen in that area. He can never catch him really until he goes out and does it. He got to play two and a half to four games for us and he also played some at the beginning of the season, in some drives where we thought it was necessary to put him in to gain that experience. It’s the same thing with him. It is a level of consistency. We had to totally rework his mechanics. If you would have asked me a the beginning of two-a-days, from day one when we got here as a staff to now, who the most improved player on offense was, it would have been him. He made tremendous strides in improving his fundamentals but he still needs to continue that, as well as being a more consistent player. We need to see the best Jerome more than the other.

CF: How much more work will you get done with these guys this spring compared to last?

TH: Light years. Light years. Instead of teaching them formations and snap counts and how we call plays, I’ll finally get to teach them, as a quarterback coach, this is how we refine things and these are the nuances and this is how you look a safety off on this play. Things that get lost a little bit when you’re trying to install an offense. I think that last spring was trying to teach them the offense. This spring will be trying to teach them how to be a more consistent quarterback in this offense.

CF: For those who have never seen James Capello play, can you give us a little scouting report?

TH: He’s tremendously accurate. He runs a lot better than you’d think. Coach McKnight has really sung his praises here in the last few weeks about how he’s done with his offseason work. He’s really worked on his body. He came in overweight and kind of pudgy. He has really trimmed down and gotten back to the athlete that we saw on high school tape. He is extremely accurate. He has got to work on the speed of the game. That’s tremendous for him right now. Also, understanding our offense. He was down with the scout team for the entire season. He is certainly not a bust and can certainly push those guys, once the offense clicks for him. He can really throw the football. He has a savvy back there in the pocket. He can run. His deal is, he doesn’t know his right from his left right now in this offense. That will be the biggest thing for him.

CF: There is a thought out there that by looking at your history, your quarterbacks seem to click in year two. Is that true or is that a statistical anomaly?

TH: That’s a statistical anomaly. The first year at Texas State, my first year, I had a senior. He threw for 3,000 yards and rushed for 1,000. It was his first year. Granted, we have evolved a lot offensively since then. I think that it is a product of, they were very similar situations in terms of our guy at Rice. I was his third position coach in three years during that first year. Here, it has been very similar in terms of Austen coming in with a staff, and then a new staff in two years and now this system. I certainly would like to hope that we show that kind of improvement this year too, as opposed to year two at Rice. I don’t know that it is planned that way or that it has to be that way. I think that the circumstances surrounding both of those staff changes were really similar.

This is only part one of a two part interview that I did with Herman. You’ll be able to read what Herman said about the rest of the offense on Thursday right here at CycloneFanatic.com.