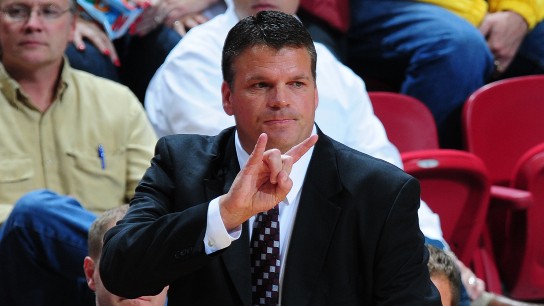 Iowa State picked up their second conference victory of the season on Saturday night by defeating Colorado 64-63. After the game, head coach Greg McDermott spoke with members of the media. Here is the complete Q&A.

“Obviously, we were fortunate to win. The start of both halves, we have a lot to be desired. We have to figure out whether, number one, if we need to make some changes there. Or just value the basketball. We had six turnovers in the first 12 possessions. We were down 15-4. There was basically a replay of what happened at Oklahoma. I give a lot of credit to Chris Colvin, Dominique Buckley and LaRon Dendy. They really saved us in the first half. We were dead in the water until we went to the bench. Then, some good things happened. Chris Colvin played his best game as a Cyclone. I told him at halftime, after a couple of those drives that he took to the basket in transition to look for your teammates first. Don’t worry about scoring. Worry about trying to get other guys involved because you have the ability to do that. I thought that he really, really made it a point to get Craig Brackins going. It is good to have Craig back. That kind of intensity, him wanting the ball down low, I think for anybody who has forgotten what Craig can do when he isn’t double-teamed, tonight was a reminder of that. I am proud of the guys. We turned it over far too much. I don’t think that the turnovers are X and O turnovers. I think that they are lack of judgment turnovers. Just being able to make a decision on the fly, as to what is the best play at this point in time. We’re not great at that. Often times, Marquis is having trouble with that. We have got to get it fixed because we need him on the floor. He does too many things good for us. I am proud of the way the team played. This Colorado team has been scoring a lot in conference play and we were able to slow that down.”

Can you talk about Justin Hamilton’s performance?

GM: He got us started as well. He is getting his hands on a lot of basketballs. Justin Hamilton has played really good basketball since the Christmas break. If you look at his numbers before Christmas and after Christmas, it is two totally different people. As I told him in the locker room, there are some nights where the game fits LaRon and what he brings to the table. Tonight, the way Craig was playing, we were able to get enough timeouts where he didn’t need breaks so with the way that Justin was playing defensively and on the backboards, we had to keep him in the game. As a result, LaRon didn’t play as much.

Did you suggest to Craig at halftime that he become more active?

GM: We always suggest that to Craig. I am not going to be critical of Craig Brackins because he, I go back again to that there are not many people in this room or that stadium that would have made the decision that he made. We owe him a lot more than he owes us.

Can you talk about that final play?

GM: That is a tough scramble situation because in that timeout, you don’t ever want to bring up if we turn it over, this is what we want to do. Diante made the cardinal sin of faking a cut in that situation. You just can’t do it. You’ve got to stick with your cut. He was going to be open. He faked it and Craig threw it away. You’re right. It is a scramble situation. We practice those situations. Our guys got matched up. We switched a couple of ball screens and made them take a challenged shot. It takes a little luck sometimes as well.