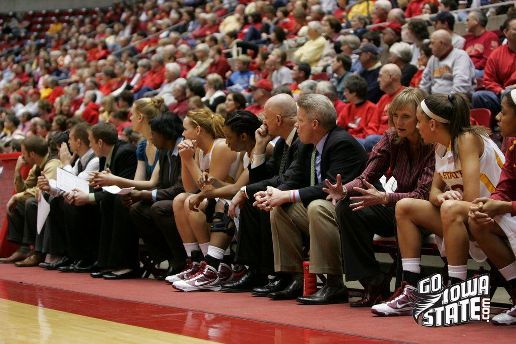 The Iowa State (5-1) women’s basketball team will host the University of Iowa (5-4) at 7 p.m. this evening in Hilton Coliseum. The Cy-Hawk contest will also be televised on Mediacom. On Monday, Cyclone head coach Bill Fennelly met with members of the media to preview the game. Here’s what Coach Fennelly had to say to preview the big one.

What have you seen from Iowa coach?

BF: I have been very impressed. Obviously, they have had some injuries and illness to deal with. In the video that we have seen so far, their coaches have done a really good job with that team. They have competed. They have been in every game that they played. I think that they are getting very good guard play. Wahlin is a very good player. I think that Jamie Printy is playing above and beyond her years. I think that they have done a really good job with Morgan Johnson, to have her kind of be the focal point of their inside game right off the bat. She plays a different style, away from the basket a little bit. They play a little different style offensively. A lot more motion. Smaller, drive and kick. It’s something that we haven’t seen and we certainly haven’t seen from them. I’m sure that they will come in here excited about playing and like I said yesterday, we have to play better than we played yesterday to really feel like we have a legitimate chance to win the game.

Morgan Johnson and Anna Prins. How are they similar and how are they different?

BF: I think that they are similar because they are pretty skilled kids for their size, away from the basket. I think that they are both freshmen learning how to play at this level, probably how to practice at this level, how to handle for the first time in their lives players who are as tall, if not taller. And the physical nature of the game. You get beat up a lot more in the college game. That’s not a foul in college. You have to learn to play through contact. You have to learn to play through things that for the first time in your life, you have to deal with. I think that they are both people who have by accident or by design, whatever way you look at it, have become very important to their team already as incoming freshmen. They are both good players and certainly both handled the start of their careers very well.

Will the intensity of the Iowa game feel like a conference game?

BF: Yeah. It is obviously a big game. There is a lot of attention to it. You do get that conference feel early. We have a big week where we play Iowa and then turn around to play Minnesota. You do. It is kind of like that preparation. You get two days to play a really good team. In two days, you play another really good team. You are playing a team that doesn’t have glaring weaknesses and you’re not going to go in and for sure have better players. You’re not going to have for sure more size. You are playing a team that you see, game in, game out playing in a BCS conference like we do. That is exactly what we are anticipating and I don’t think there is any question that our kids are excited about playing. These are fun games. Certainly it is a lot of fun that we’re playing it here. We’ll have a big crowd. Those are the kind of games that every coach says, you don’t need to do a whole lot of talking. There shouldn’t be a whole lot of pregame speeches. If you’re not juiced up to be involved in this kind of a game then you are probably in the wrong place or certainly in the wrong state right now.

What does your team need to do against Iowa that they didn’t do on Sunday?

BF: We’ve got to be a lot more efficient in the post than we’ve been. It doesn’t have to be that they play off the chart, great. But we have to go better than 5-of-15 from the field. We have to not turn the ball over seven times in the post. They don’t have to win the game. They just have to hold their own. We won’t have an excuse because our post players are freshmen and Iowa’s are as well. It’s not like they have to play against someone who has a lot more experience or whatever. All of the post players who will play a predominant role in the game, it is the first time that they have played in this game. They are freshmen so just go out and do the things that you are capable of doing. Don’t do anything crazy. Make a layup. Make a free throw. Defend solidly. Let the other kids do the things that they are supposed to do.

In all of your years coaching, have you ever seen Iowa State and Iowa both be so young?

BF: No. I have tried to track back to look at some of the other games. There have been times that we had younger players but I don’t know that there have been times that both of us had younger players doing so many prominent things in the games. It’s just one of those things where there are uniquely young kids involved at a very important part, whether it is point guard, post, off the bench…we are both playing a lot of young players for a lot of minutes. Sometimes that is a good thing. That’s what makes this game even more interesting. How will they react to that? How will these younger players on either team react? 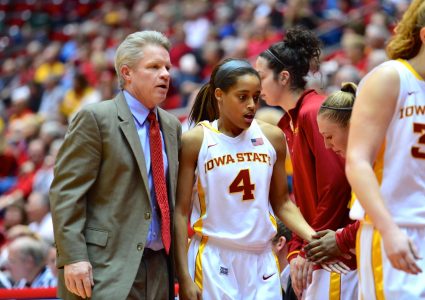