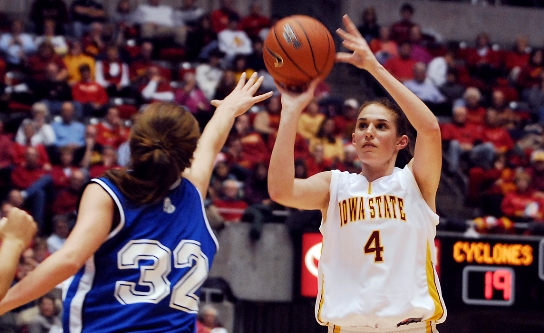 AMES, Iowa – The Iowa State freshman had another big showing for the Cyclone women’s basketball team Sunday afternoon as Chelsea Poppens and Anna Prins led ISU in scoring while the Cyclones turned in a 98-37 win over Minnesota, Crookston in their final exhibition contest of the season.

Poppens collected her second straight double-double with 22 points and 12 rebounds, while Prins posted 20 points and went 8-for-8 from the charity stripe. They were the only two post players available for Iowa State since Amanda Zimmerman missed the contest due to a sprained ankle and Genesis Lightbourne is still out after having knee surgery on Oct. 30.

Whitney Williams, Shellie Mosman and Kelsey Bolte each finished with 12 points and every available Cyclone scored for ISU. Alison Lacey led the team with eight assists and Denae Stuckey pulled down a team-high 13 rebounds. The Cyclones shot 53.5 percent (38-71) from the floor and 45.8 percent (11-24) from beyond the arc for the contest. Mosman went 4-for-6 from three-point range and Anna Florzak hit two of her three long-range attempts.

The Cyclones posted 18 steals and only committed eight turnovers in the contest. Iowa State outrebounded Minnesota, Crookston, 45-30, and outscored the Golden Eagles, 46-6, in the paint. They Cyclones also held a 20-0 advantage off of second-chance points.

“This game was very similar to last Sunday,” Fennelly said. “To see the smiles on Shellie and Anna’s faces was the highlight of the day. We did a lot of good things and we are excited about what is coming.”

The Cyclones took a 49-21 lead into the break after shooting 53.8 percent (21-39) from the floor and 45.5 percent (5-11) from beyond the arc. The ISU defense played an outstanding half of defense as well, holding Minnesota, Crookston to 26.9 percent from the field and forcing the Golden Eagles into 11 turnovers.

More information on this game can be found at www.cyclones.com.