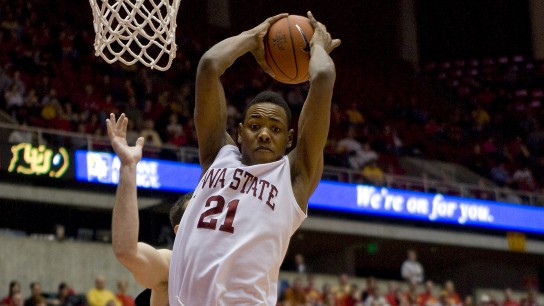 Craig Brackins and Marquis Gilstrap combined for 49 points and 17 rebounds as Iowa State cruised to a 96-55 men’s basketball victory over Mississippi Valley State on Sunday afternoon.

Here’s what you need to know about the contest.

– Brackins led the way for Iowa State with 28 points and 12 rebounds. Craig went 11-of-17 from the field. Brackins is averaging 18.5 points through Iowa State’s first four games. That was Brackins’ 26th career 20-point game.

– Marquis Gilstrap scored 21 points against the Delta Devils. Gilstrap was 8-of-11 from the field. He also collected five rebounds in the win. Gilstrap is now averaging 13 points per game so far this season.

– Iowa State point guard Diante Garrett led the team in assists again this afternoon with eight. He now is averaging 7.8 assists per game. Garrett turned the ball over three times, while scoring six points. He was 2-for-4 from the field.

– After scoring 32 points against Drake on Tuesday, Lucca Staiger was held to only three points this afternoon.

– Scott Christopherson scored 10 points today. He’s now scored 10 or more in all of Iowa State’s four games so far this season. He is the first Cyclone to come off the bench and accomplish that feat since Marcus Jefferson did it back in 2003.

This was the first time all season that we’ve seen Craig Brackins and Marquis Gilstrap click in the same game. For those of you who weren’t in attendance, trust me when I tell you that it was fun to watch. We’ve all talked so much about the athleticism on this year’s roster but in my opinion, we got our first, true taste of that this afternoon in Hilton. That’s just one reason to feel great about this basketball team through for games.

The other and most important in my opinion is the fact that Iowa State has won their first four games by a total of 20 or more points. That’s the first time that has happened since the 1999-2000 season. Now tell me that thinks aren’t heading in the right direction. That is a huge step up for a program that was losing to the EA Sports All-Stars and Iona not too long ago.

The most intriguing position battle currently going on is the fight to see who will be Diante Garrett’s backup at the point guard spot. Chris Colvin and Dominique Buckley both scored five points in today’s win. But once again, Colvin got more playing time. He was out there for 13 minutes compared to Buckley’s eight. Buckley is a good enough player to be on the floor regularly, as is Colvin. This is a good problem to have. In Buckley’s 29 minutes this season, he’s gone 2-of-4 from 3-point range, while racking up six assists compared to two turnovers. Colvin has collected 13 assists to 12 turnovers in 56 minutes, while averaging 3 points per game.

Up next for Iowa State is Tennessee State on Tuesday night at 7 p.m. As always, CycloneFanatic.com will be there providing complete coverage as the Cyclones will look to start of the season 5-0.