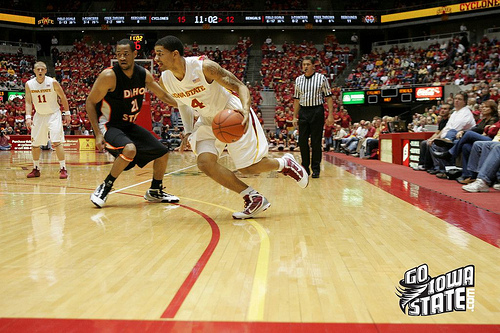 Iowa State moved to 8-3 on the season today with their 87-68 win over the Bradley Braves.

– Craig Brackins might have played his most complete game of the season against hte Braves. Brackins nearly recorded a triple-double, with 16 points, 10 rebounds and seven assists.

– Marquis Gilstrap went 7-for-11 from the field to score 25 points and record eight rebounds.

– Scott Christopherson came off the bench to score 11 points for Iowa State. He went 5-of-8 from the field.

– Iowa State went 19-of-29 from the free throw line against Bradley. The Cyclones shot 26 of those in the second half.

– Iowa State went 6-of-16 from 3-point range. Gilstrap and Brackins hit five of the six for the Cyclones.

This was a solid win for the Iowa State men’s basketball team. I already see a handful of Fanatics complaining about the second half, but that seems a little excessive to me. Face it. Before today, what Iowa State Cyclone basketball fan wouldn’t have been happy with a 19-point win over the Braves? Watching the once massive lead slide was disappointing, but that’s as far as I’ll go.

Let’s move on. There’s no reason to focus on negatives.

Charles Boozer played a nice game today, scoring seven points and going 3-for-4 from the field. Maybe I am alone on this one, but Boozer reminds me of my golf game. The majority of the time, the way he plays drives me crazy. You never really know what Charles is going to do when he has the basketball. But the thing is, for every five bad plays he makes; Boozer comes back and with an incredible one. It’s just enough for me to keep my membership in the Charles Boozer fan club. Just like golf. There’s no doubt that Boozer is a fan favorite in Ames and he should be. He always hustles. He’s athletic, he has fun and he’s a quality member of the Iowa State basketball program. It was good to see him have some success today.

After a long week of finals and traveling, LaRon Dendy came out and scored nine points today for the Cyclones. Dendy completed an alleyoop jam in the second half that got the crowd on their feet. At the conclusion of the play, he blew a kiss to Cyclone fans who were sitting behind the basket. It’s good to see that Dendy loves Iowa Staters as much as they seem to love him. Dendy, along with Chris Colvin, were once again sparks off the bench today for Greg McDermott. Colvin only scored two points but dished out two assists as well, in 15 minutes of play. Dendy played 12 minutes in the contest.

Iowa State gets North Dakota on Tuesday night in Ames. The game will tip at 7 p.m. and be televised on Mediacom. After today’s game, McDermott told the media that North Dakota plays a Princeton style offense along with a 2-3 zone. McDermott said that the Cyclones would practice “short but hard” tomorrow-in preparation for the game.