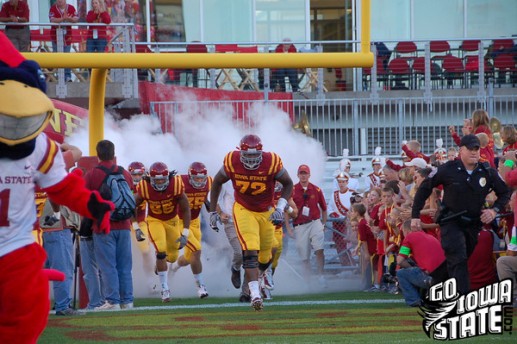 It’s time to open my mailbag today here at CycloneFanatic.com. This is a feature that I want to start running every Wednesday. You ask the questions on Monday or Tuesday, I’ll post my answers here on the site. Nothing is off limits (within reason people). Let’s have a great time discussing all things Cyclone and a whole lot more.

Let’s get started. Clones21 writes…What do you think needs to be our biggest improvement on offense in the 2009 Mens Basketball season?

CW: This is a pretty simple answer to me and that’s the play from the wing…specifically the addition of Marquis Gilstrap. KGClone has been very vocal on this forum writing about how Gilstrap’s defense could be an issue, but I really feel like what he brings to the table on offense will make up for that. Listen, Iowa State literally had NOTHING at this position a year ago. Craig was still dropping crazy numbers. I’ve talked with Craig about this. He gets jacked up just thinking about the pressure that Gilstrap will take off of his game. I also feel like the Scott Christopherson/Lucca Staiger combo from behind the arch will be very beneficial. I have a hard time believing that both can be “off” on the same night.

St8 writes…status of AA and Arob? Will a large amount of players be dealing with flu like symptoms again come Saturday and most importantly, who do you think is going to win survivor??

CW: I posted earlier today that the pair practiced yesterday, according to the Ames Tribune. I really think that they’ll both play on Saturday. I’m more confident in A-Rob than I am AA, but if I were a betting man, I’d say they both start.

As far as the flu goes, your guess is as good as mine. I’d think that some of the players might have the flu on Saturday just because it’s spreading like wildfire across campus. I’d anticipate them to play if they can in any possible way though.

ISUFan22 writes…Status of Houston Jones…is he still injured or just behind other guys. If injured, do we expect him to return this season?

CW: From what I’ve been told, he’s just behind other guys on the team. I’m pretty sure that his injury situation has been cleared up.

Cmoore23 writes… What to expect from Texas A&M and Injury report for both basketball teams?

CW: I expect A&M to score a lot more than Nebraska did. How’s that for analysis? No really, I think that the Aggies will put up at least 25 on Iowa State’s defense. That’s why Iowa State desperately needs healthy versions of AA and A-Rob.

Basketball injuries are a sticky subject at this time for a couple of reasons. The first is because until the season starts, the hoops programs kind of hide out and do their own thing so it is hard to come upon that story. The second reason is because if there are any injuries, that’s now knowledge that programs want out there at this time.

We know that Jamie Vanderbeeken has been fighting that foot issue but is expected to be healthy sometime soon. For the women, here’s the very latest from the Ames Tribune.

CW: It’s an Ibanez. A pretty simple piece really. I enjoy it, although I am thinking about making an upgrade sometime soon. Any tips? It’s just sitting against the wall. I take it that’s bad?

Abe2010 writes… As a fellow SW Iowan, I want to know how satisfying the win at Nebraska was for you. I know it means a lot to me since I lived within smelling distance of Nebraska for many years.

CW: I love all Iowa State victories but beating Nebraska is special for me personally. I’ve lived in that area of the state for the majority of my life. It’s awful. I don’t even have a problem with Nebraska or their fans…their real fans that is. My problem is the people who are from Iowa, have no connection to Nebraska and are diehard Huskers. I always ask this question. If Iowa or Iowa State were winning national titles in the 70’s and 80’s, would Nebraska have nearly that many fans in the state of Iowa as they do? I don’t think so.

“We’re closer to Lincoln than we are Ames or Iowa City,” they say. My response…”Where do you pay taxes?”

I2alphmacchio writes…Chris, I would like to know how big of an impact it was for you to make the move from SW Iowa back to Central Iowa. I for one (and pretty sure I can speak for most of CF.com) appreciate the commitment and more involvement you are dedicating. Thanks.

CW: Thanks for the kind words. Leaving SWI was a bittersweet thing for me. Here is my current scenario. I’m engaged…getting married in May. My fiancée is currently attending Iowa State’s vet school. And last but certainly not least, covering Iowa State athletics is a passion of mine. It’s really all I want to do. I have no aspirations of “moving to a bigger market” or anything like that. I hope that this is the last job I’ll ever have. Having said that, leaving KMA was hard because I’ve worked with that station in some way or another since I was like 18. Great people and for those who don’t know, KMA is the biggest station in Iowa on the western side of the state. It’s like WHO, but for western Iowa. Great job, but I’m very happy to be in central Iowa, literally living my dream. I’m excited for the future.

Clonefan94 writes… How does ISU match up against aTm? What is their biggest strength/weakness? What can ISU do to counteract/attack these?

CW: This is a weird match-up. It is really hard to understand A&M. Great offense…horrible defense. I don’t love this match-up for ISU, I won’t lie. I think it’ll all come down to how healthy the Cyclones are. I think that the best way to counterattack A&M is to run the football effectively. Keep their offense off of the field. That’s the key in my opinion.

CW: Your guess is as good as mine. I honestly don’t know. I’ll try to find out though.

Cycsk writes… What do you think about an Iowa State/Auburn game in the Independence Bowl?

CW: Obviously, that would be really cool. I really think that Iowa State fans should hope for more at this point though. The Clones are right in the thick of things to win a North championship. Having said that, the players would be very pumped to play the old ball coach, as Mac would say, there’s “no doubt about it.”

3Cheers4LkyJack writes… Did an alien craft really crash at Roswell?

CW: I do believe so. It’s hard for me to imagine that we’re the only living things out there. I believe in ghosts, aliens and much more. Call me crazy.

Will the staff go after a JUCO QB that fits Herman’s system better??

CW: I don’t really see a need for a JUCO QB at this time. Iowa State has two very competitive quarterbacks coming back next season. I wouldn’t mind bringing in a hand-picked freshman, but again, no JUCO at this time in my opinion.