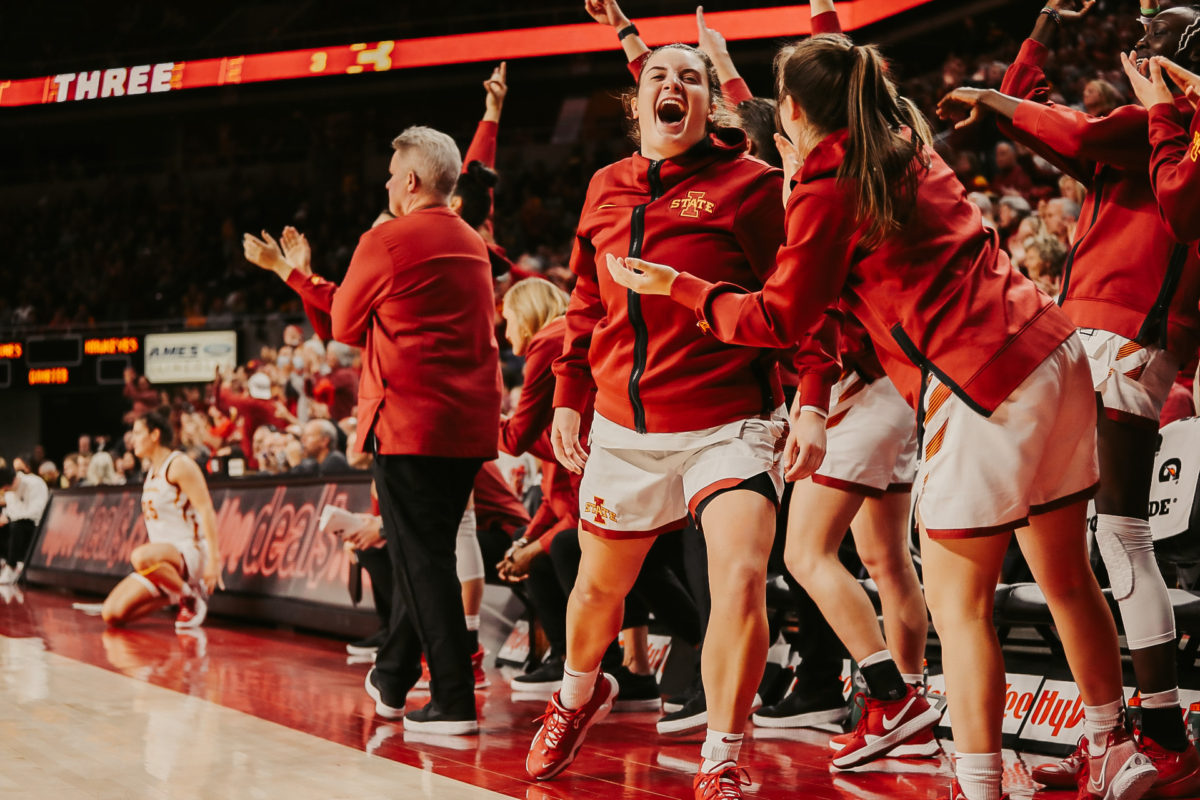 Emily Ryan turned an interception into a break-away layup with 99 seconds to play in the third quarter of Wednesday’s Cy-Hawk game. Addison O’Grady had a lay-in for the Hawkeyes before Aubrey Joens, and Caitlin Clark traded a pair of 3-pointers.

Iowa State and Iowa were in the middle of a top 15 slugfest at this point, heading into the fourth quarter of the first Cyclone victory, a 77-70 win, in the series in the past six years.

“I just told (my team), ‘We’ve got a three-point lead with 10 minutes to go in the best place in America to play,'” Iowa State coach Bill Fennelly said of his huddle ahead of the final quarter. “This is what you came to school here for. This is what college sports are supposed to be about.”

Fennelly told his team that the goal was to start with one-stop, one score, and see what happens from there.

Iowa State had gotten out to a seven-point lead before Clark hit her fourth and longest, 3-pointer of the game, trimming the deficit back down to four. Seven minutes remained on the clock in the game.

Just 17 seconds later, Lexi Donarski got the ball and canned a triple to deliver a punch back in favor of the Cyclones.

“I didn’t notice her celebrating after it,” Donarski said. “It’s a team game. The pass (I got) was right on. It was a lot of fun – just a great experience today.”

Iowa didn’t come within three points of the Cyclones for the rest of the night, and Iowa State found itself a top 15 win.

It’s the first time in Iowa City native Ashley Joens’ career that her team has come out on top in a Cy-Hawk game.

“This was definitely one thing we wanted to accomplish,” Joens said. “Iowa isn’t going to go away. It was one of those big games where they weren’t going to stop fighting. You just have to keep going.”

Both Joens sisters finished the night with double-doubles, the second-straight game that has occurred. Ashley recorded 26 points, Aubrey had 12 on the night, and each sister came home with 11 rebounds.

However, the more significant difference may have been made on the defensive side of the ball.

Donarski limited Clark to a 10-26 mark shooting from the field while making only 25 percent of her long-range shots. She finished with 26 points on the night.

“I thought (Donarski) did an amazing job (guarding Clark),” Fennelly said. “If her shots equaled her points… that’s exactly what we wanted. She had to work hard to get her shots. (Donarski) did great.”

Meanwhile, Morgan Kane and Beatriz Jordao were dishing it to Monika Czinano in the post.

As Iowa’s second-leading scorer, Czinano had to come to the bench repeatedly due to being in foul trouble. She walked away with just 13 points – her season’s lowest point total thus far.

“I thought (Jordao) and (Kane) did a great job,” Fennelly said. “They didn’t let her get her best position before she got the ball, and we want to make her work (on the defensive side), too. I thought (the pair) did an outstanding job.”

When the final buzzer went off, the Cyclones celebrated before singing with the 11,348- person crowd. They swung their hands to ‘Sweet Caroline’ after a day when companies like ESPN and The Athletic had a spotlight on Ames and the Cyclones did the one thing that they hadn’t done in recent memory.

“It’s fun that this kind of game and this kind of rivalry brings that kind of attention to our school and our state,” Fennelly said. “The games have been so competitive – luckily, tonight we finished it.”