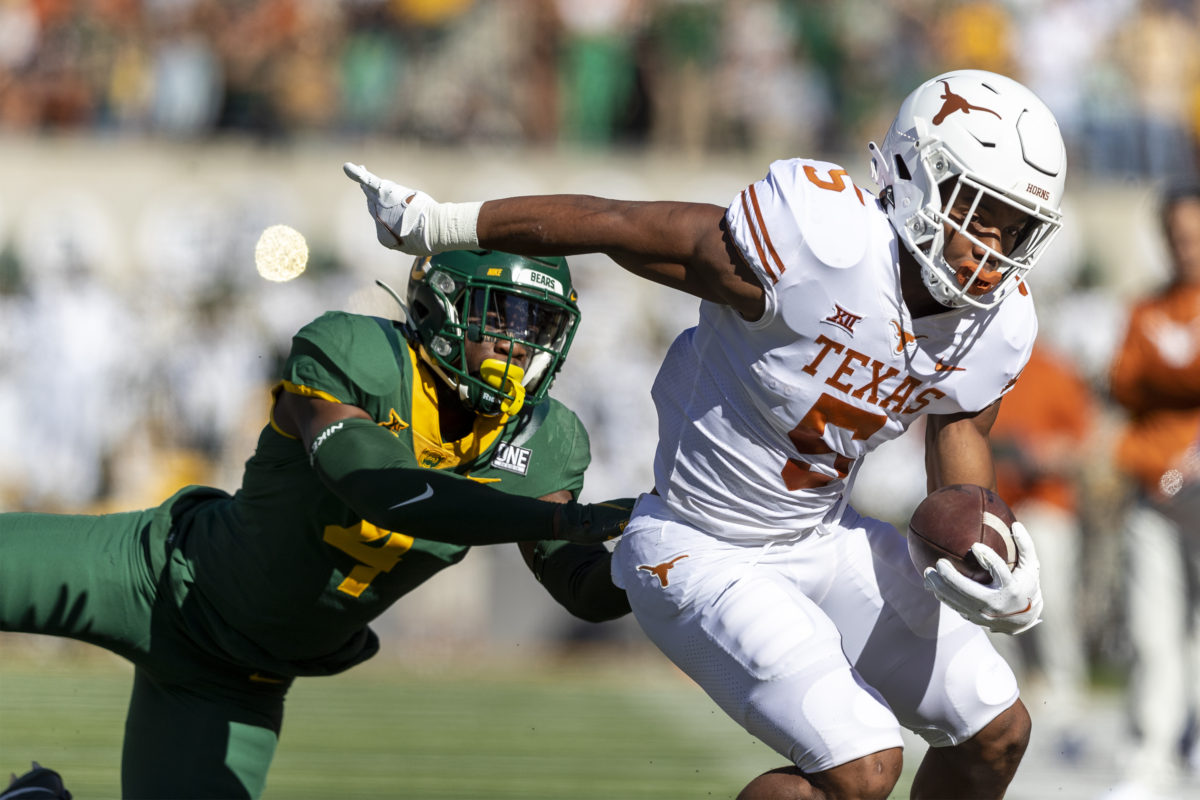 I challenge you to find a better running back battle than the one we’ll see Saturday in Ames when Iowa State and Texas take the field at Jack Trice Stadium.

*waits for a split second*

Okay, that’s enough waiting. You’re not going to find one. There will not be a better matchup of tailbacks in college football this season than the one we will see under the lights on Saturday between the Cyclones’ Breece Hall and Longhorns’ Bijan Robinson.

Are these the two best backs in all of college football? There’s probably a case to be made. Michigan State’s Kenneth Walker would surely like to have a say in that conversation, though.

Hall is tied for eighth nationally with 12 rushing touchdowns this season. Robinson is tied for 11th with 11 rushing scores on his ledger.

Are they the two best backs in the Big 12? You’re damn right they are.

Again, I challenge you to find a better tailback matchup than the one we’ll see in Ames on Saturday. But I can tell you you won’t.

*** MVP chants rained down from the rafters on Monday in Philadelphia as the Sixers beat Portland 113-103 without Joel Embiid in the lineup. I’m sure you’re thinking, ‘If Joel didn’t play, who got the MVP chants?’

It was none other than former Cyclone Georges Niang.

He posted 21 points, five rebounds and five assists in the victory.

Clearly, ‘The Minivan’ is on his way to being a favorite of another fanbase. We should have seen that coming from a mile away.

*** We got one of the wildest college football stories in years weeks on Monday when it was reported that the pet monkey of Texas’ special teams coordinator Jeff Banks attacked a small child at their home during Halloween weekend. Or, at least that was the initial report.

We quickly found out Banks has been in the news for wild headlines before. That came when he left his wife and kids for a… um… adult entertainment artist by the name of Pole Assassin. It turns out the monkey is part of the family business and is also involved in the adult entertainment industry.

I don’t even have any jokes to write about this. I still can’t believe it is real, but we know it is because Pole Assassin (how is this something I keep having to write) took to Twitter to tell her side of the story (in a since-deleted video preserved by RedditCFB).

I would expect a headline like this from another league, but not the Big 12. This is the kind of behavior you only expect to see from SEC progra–

*** Iowa State freshman point guard Tyrese Hunter came in at No. 87 on ESPN’s list of Impact Newcomers for the 2021-22 season. From the article:

“T.J. Otzelberger should have the Cyclones playing at a faster tempo than they did under Steve Prohm, and that should be great news for Hunter. He’s outstanding in transition, loves to push the ball and is explosive at the rim.”

The Cyclones are going to need Hunter to hit the ground running as the program’s floor general. His transition to the college game is going to be a fun one to follow as the season starts next week.

He’ll get a stiff test almost immediately when Oregon State rolls into Ames a week from Friday. Remember, the last time we saw the Beavers they were playing in the Elite Eight.