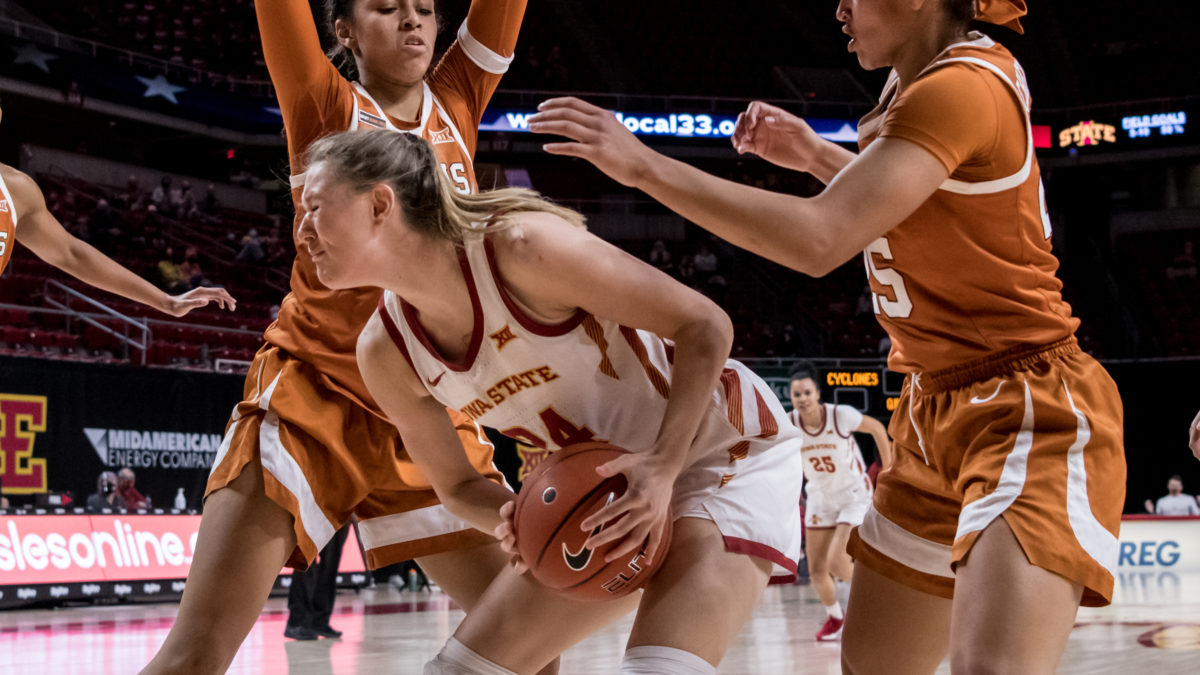 Each of the last two times out against Texas, Ashley Joens didn’t play at her superstar ceiling.

The Cyclone junior is nominated for the Cheryl Miller Award – which is given to the best small forward in the nation at the end of the season.

Obviously, Joens has had a number of performances that are highlighted above the rest of them during her career in Ames.

She might need to have a game like that for Iowa State to overcome the Longhorns in the first round of the Big 12 Tournament on Friday morning at Municipal Auditorium in Kansas City (10:30 a.m. CT ESPNU).

“(Joens) has not played great against Texas,” Iowa State coach Bill Fennelly said. “The first game, down there, she really struggled to score. I thought she got some decent shots, but they do a good job (on defense). They are going to be really physical with her. They’re going to double-team her. They’re going to make it tough.”

In the first matchup with Texas, Joens started off the game missing four of her first five shots from the field.

She finished with a 4-17 mark overall and scored 17 points, with her saving grace being 10 free throws.

“The second game, at our place, she got in foul trouble and – she did okay – but she wasn’t as (impactful) as she would normally be,” Fennelly said.

During game two, Joens was once again held to below 20 points. She picked up two fouls on hustle plays in the first quarter and another in the third, logging three turnovers and scoring just twice on free throws through the first 20 minutes.

She finished with 19 points on a much more normal-looking second half, but Iowa State will need two complete halves out of her to get over the hump that is the team in burnt orange from the Lone Star State.

The biggest aspect of that will be how she and her teammates can come out of the gates.

“I think the biggest thing is to see if we can get her off to a good start,” Fennelly said. “She’s had some trouble getting going against Texas in both games whether it’s not making shots or getting in foul trouble. That’s a microcosm of our team, against Texas. Nothing has really gone the way that it needs to go to have success and that’s a credit to them and the way they play.”

Iowa State will have to adjust.

Not to mention, they’ll have to do it without seeing how Texas plays against Joens with Audrey Warren in the post.

The 5-foot-9 junior guard will be suiting up on Friday, although she wasn’t available during the Cyclones’ first two games with the Longhorns.

“(Warren) is a really physical, aggressive defender,” Fennelly said. “I would assume (she will) have the responsibility of guarding (Joens), so we’ve got to be really smart on where we get her the ball.”

Those adjustments will continue to be made throughout the game, but there are a couple of points where that doesn’t involve forcing a drive – although, it’s one of Joens’ strengths.

Fennelly wants to see her get points off of transition offense or 3-pointers.

“Yeah, we will (make some adjustments),” Fennelly said. “We want to try and get the ball in space a little bit more. She’s got to be willing to take the 3 a little bit and not force the drive. We’ll try to get her in space in transition if we can, but the biggest thing is entry points to your offense have to be adjusted and hopefully we can find those to have a little bit of success.”

Iowa State has a game plan, and they’ll stick to what it is.

No matter what, though, Joens is a tough player. She wants to get out in front on Friday as much as anyone.

“They’re aggressive defenders,” Joens said. “They get up on you. You just have to be able to handle the pressure and battle back…

“You have to keep playing.” 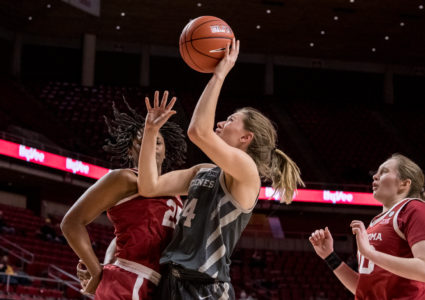