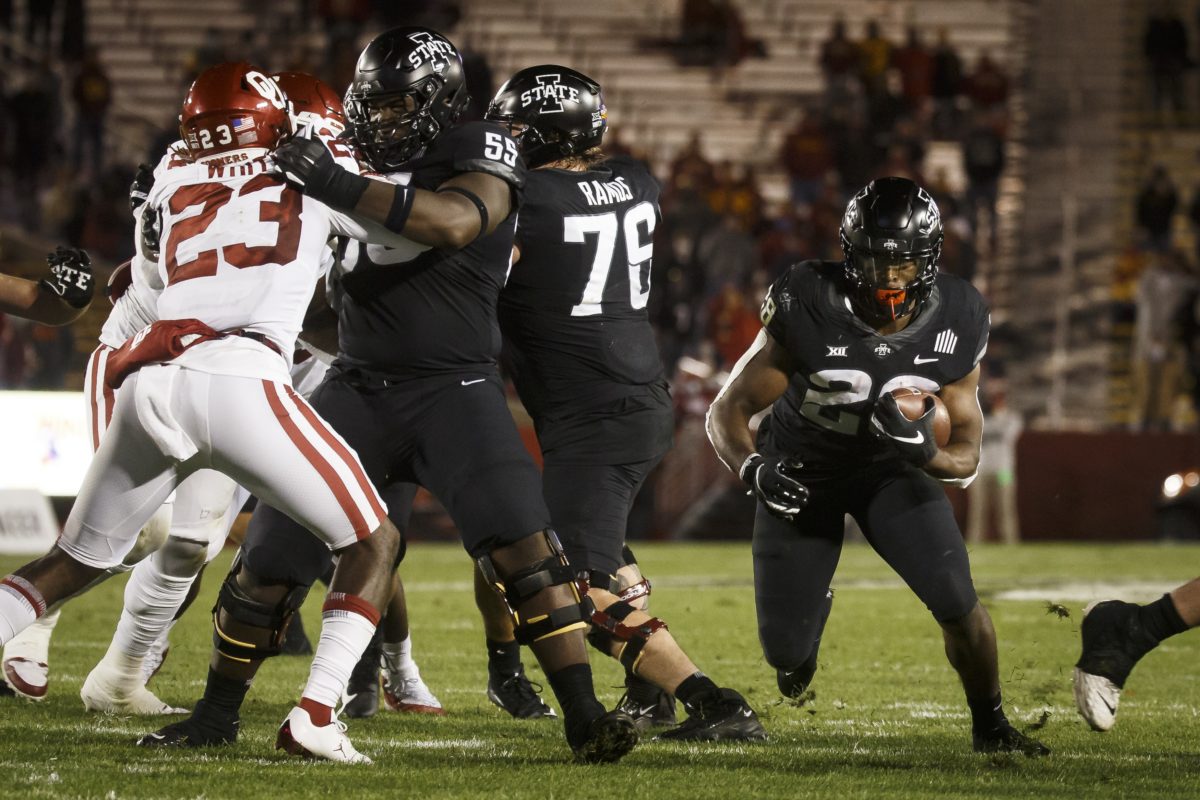 Iowa State has the chance to win a championship ring for the first time in over 100 years.

As J.R.R. Tolkien once wrote: “One ring to rule them all. One ring to bind them. One ring would be pretty cool to brag about, but we’ll likely be back here at some point pretty soon so it’s not the end of the world if we don’t get it. But we damn well should.”

At least that’s how I remember Gandalf saying it.

Iowa State and Oklahoma already played once this season, with Iowa State beating them 37-30 in a wild game in Ames. Oklahoma has won every game since then, and Iowa State has gone 6-1 since that matchup in October. The Cyclones have won their last five including, including thumpings of West Virginia and Kansas State and a dramatic victory in Austin on the Longhorns’ senior day. There really isn’t a justification that anyone can make to say that these aren’t the two best teams in the conference and the two hottest.

So who has an advantage? How do the teams stack up? And how can you tell who is getting the upper hand in this enormous moment for the ‘Clones?

The best player on the field is Iowa State’s Breece Hall. This is actually a critically important point. Because defensively, everything OU must do hangs off of this fact. Every single defensive pre-snap read for Oklahoma is tied to “where is No. 28 and what is he doing.” Alignments are tighter to the line of scrimmage, run steps are half a second longer to ensure a good potential tackling angle, and pass rushers on almost every down-and-distance have to slow down their pass rushes out of fear of leaving too much space for him. It changes everything.

Iowa State knows it, and Oklahoma knows it. With that mandatory context, we’ll size up which matchups carry the most weight.

Oklahoma has been one of the best teams in the country against the run.

Not only in the conference but in all of college football.

However, almost 20% of their 738 rushing yards allowed on the entire season came in Ames. So although statistically stout, Iowa State’s balance and talent create a unique challenge, which leads the OU coaching staff into a unique challenge: Do you trust that your defense, without adjustment, can stop the Iowa State running game? Or do you need to add more emphasis to the scheme and “sell-out” to stop the run?

This decision is an “either-or, not both” choice and an extremely important thing to monitor as the game progresses.

The ideal state for Oklahoma to exist in is playing their base defense against Breece Hall and the ISU run game, which allows for the Sooners to add more bodies to the passing game. I’d imagine this is what OU tries to do.

But, if Iowa State’s big fellas can continue to create running lanes and allow the ISU RBs to gain consistent yardage, that plan must be scrapped in favor of one that puts extra people into run-stopping roles.

Iowa State saw this exact look—one that favors stopping the run with a ton of bodies—the entire game against Texas. Consequently, ISU’s tight ends gained 200 yards receiving in that game due to spaces made open by putting those defenders so close to the line of scrimmage.

In the OU-ISU matchup in Ames earlier this year, the Oklahoma defense played it more-or-less straight, meaning a base defense not wholly committed to the run like Texas.

Before you think, “Well, that worked last time so they can do it again,” consider this…

In the entire game, Iowa State only had two drives where they were trying to score that didn’t end in points (end-of-game kneel down notwithstanding).

Throughout the game, Iowa State had a bunch of self-inflicted penalties in the red zone. These could have changed some, or all, of their three field goal drives into touchdowns.

Specifically, Iowa State had eight offensive penalties called against them. Six occurred in the red zone, and one was a holding call on a 31-yard Kene Nwuangwu run, which got them inside the 10.

So, if you’re OU’s coaching staff, do you play it straight and hope you can do a better job AND Iowa State again shoots their foot off with penalties, or do you commit more to stop Breece and force the ISU passing game to beat you?

As a fan, how can you tell if this is a battle-within-a-battle being won by the Cyclones or the Sooners?

1 — You’ll notice Breece Hall, Brock Purdy, and Kene making consistently large gains. More specifically, ISU would like to see a yards-per-carry average above five AND the yards not all coming from one huge run. One big run here or there is definitely good, and you’d never turn it down, but consistent success forces the opponent to say, “It wasn’t just a single missed tackle or assignment; they’re whooping our butts and we need to change something.”

2 — Second down distances are short. First down is generally a rush down for Iowa State. So first down is when this do-they-or-don’t-they conflict comes to a head. Second and six or less on most occasions means the Cyclones are running effectively or finding intermediate passing lanes vacated by defensive players focused on the run.

3 — Tight ends have plenty of receiving yards. Selling out to stop the run forces tough decisions by linebackers and safeties to be exploited. Maybe Breece has 60 yards rushing, but if the tight end unit has 237 yards receiving, that’s still a winning formula to get the ball down the field and into the endzone.

4 — Big plays in the passing game aren’t uncommon. The more people that are close to the line of scrimmage means fewer people that can take up space away from it, which leads to more one-on-one opportunities for the wideouts and more space between zones. These are where big plays are born. If there are plenty of big plays in the passing game, there’s a good chance that those plays are derivatives of a solid running game.

The other half of this sure-to-be-fun game is the perimeter players from Ames against the undersized, but aggressive, secondary of the Sooners.

Just like offensive holding calls, these are largely subjective, with some officiating crews willing to call more of them while others aren’t. But, when a size advantage is as pronounced as it is from Iowa State’s skill players (average 6-foot-4) to the Sooner secondary (average 5-foot-9), you’re bound to get more than usual.

This is absolutely a weapon.

Just like NBA players trying to defend Shaquille O’Neal, height and size are things that you sometimes can’t navigate around if the entry passes to them are in the right spot.

Arguably the part of this Iowa State team that’s come the furthest since the OU game is the passing game. Take a look at the breakdown of the passing results and efficiency when you take the first five games (including OU) and compare them with the last five games (the Kansas game through the West Virginia game).

This efficiency and output, as detailed in the previous section, is partly a result of defenses being forced into stopping Breece, Kene, and the rest of the running game.

So, even if Oklahoma is playing their base defense, Iowa State will still likely get opportunities for favorable matchups.

In short, Iowa State is going to get its chances. The Cyclones will have to continue to convert on them.

Of all the matchups in this game, Iowa State perimeter vs. OU secondary is the most mismatched in favor of Iowa State — and when a mismatch is in your favor, executing on that mismatch is imperative.

The OU counter to this is going to be any number of things if Iowa State is successful. But almost all of them are high-risk, high-reward propositions. Most, though, fall into two buckets.

Proposition one — The first is challenging Iowa State physically before the ball is thrown. Whether this takes the form of press-man coverage or hitting receivers inside of five yards (legally), length can be negated if you get inside of it. The Sooners are going to have to beat up the Cyclone receivers and tight ends before they get moving, because the quicker and easier Iowa State can get space, the quicker their length becomes hard to overcome. To return to the basketball analogy, you have to try and prevent Shaq from getting in the post, because once he’s there, it’s an easy pass and dunk.

But, the process of hitting the quarterback becomes risky against a team with Hall/Nwangwu in the backfield. As you add people toward the quarterback, you remove them from a position of tackling a running back if he breaks through the line of scrimmage.

So teams are generally reluctant to blitz Iowa State too much since blitzes are usually sacks/tackles for loss or huge plays for the offense.

So how can you tell if Iowa State is winning here?

1 — Big passing plays aren’t uncommon. Like running the ball, a greater number of big plays is better than just one or two huge ones when it comes to establishing a trend.

2 — The number of blitzes that OU is throwing at Iowa State is high. Oklahoma doesn’t tend to be a blitz-first team like others in the conference (most notably Oklahoma State). If they start bringing a bunch of pressure, it’s likely because either a) it’s working and that’s a strategy they brought into the game as a dice-roll or b) Iowa State is getting too much time to throw. Both (a) and (b) open up the possibility big plays are about to happen.

Tomorrow, we will talk about the important components of the Iowa State defense slowing down the Lincoln Riley offense. 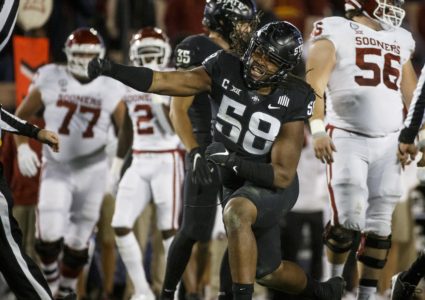 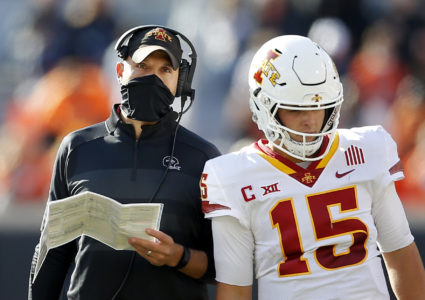 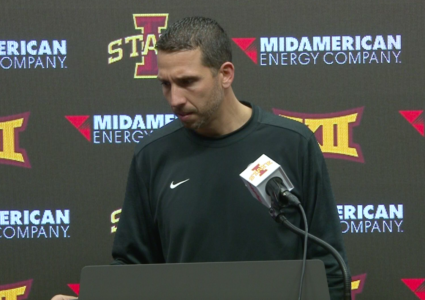