It’s the pit in my stomach.

The pit of anxiety, excitement, anticipation and adrenaline. You could call it butterflies, but I call it a pit — and there are few feelings I have ever experienced that are better.

I used to feel it before basketball games or when I would get into the blocks prior to running a race on the track. It is the feeling that defined my burning desire for competition… a burning desire to win.

As I have gotten older, the opportunities to feel that have become fewer, but this job still gives me chances each Saturday in the fall.

I feel that pit as I walk through the lots at Jack Trice Stadium, as another game day as arrived.

I was four-years-old when I went to my first college football game. In the (almost) 22-years since, I have probably been to more than 100 such contests, give or take a few.

In my own mind, the passage of time can be marked by college football.

As an adolescent, it was a feeling defined by hopefulness that was often left unfounded. College football Saturdays prior to my 19th birthday were more often than not spent at Memorial Stadium in Lincoln, Neb. during the Solich, Callahan and Pelini eras of Nebraska football.

Yeah, that hopefulness did not often offer up much.

It created a great deal more disappointment than it did anything else. If only eight-year-old me had known how long that feeling would persist while tears rolled down my face after Jamal Lord’s pass was intercepted in the end zone by Nathan Vasher to cap a loss to Texas in 2002.

That does not sound so bad now compared to the disappointment I felt at the winter formal my sophomore year of high school in 2009. I do not even want to take one second to think about that, though.

Shortly after I turned 19, I started as the Cyclone Fanatic intern entering my first year at Iowa State and sophomore year of college. That was when college football Saturdays changed.

Saying that I saw the light would probably be strong. The feeling I have when I walk up to Jack Trice Stadium in the fall is different than the feeling I had back then. It is still lined with hopefulness and excitement. It is just different in a way I cannot really explain.

But, it is there.

Early in the seven-year stretch since then, as the losses piled up, it was marked with a great deal of disappointment as well. Then a man named Matt Campbell arrived in Ames.

The hopefulness has been realized a lot more often in the last three years. Sure, there have still been moments of disappointment, but it has felt like the first time in my life as a sports fan where the disappointment does not really seem to define the end result.

I guess you could say when you reach a point where you almost expect to be disappointed, any result to the contrary will leave you feeling good.

It has been a lot more fun and has given me so many memories that I know I will cherish for years to come. There have been a lot more moments to mark the passage of time by — and ones that leave me searching for more opportunities to feel that deep sensation in my stomach.

Now, the feeling of the pit can probably be best defined as excited preparedness, knowing that I have done everything I can to get myself — and our readers and listeners — ready for the game, and now the rest is out of my hands.

The pit is still there, though, just like it was as an eight-year-old in Lincoln and as a high school kid getting ready to run the 110-hurdles. It is the best feeling — and it reminds me every time of why I chose to do what I do.

On Sunday, I will turn 26. There are many things I hope for in the year that will follow, and being able to go to a college football game might be at the top of the list.

That would be the best gift I could receive this year.

College football and the opportunity to feel that pit in my stomach again. 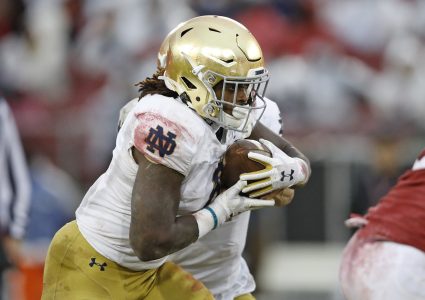