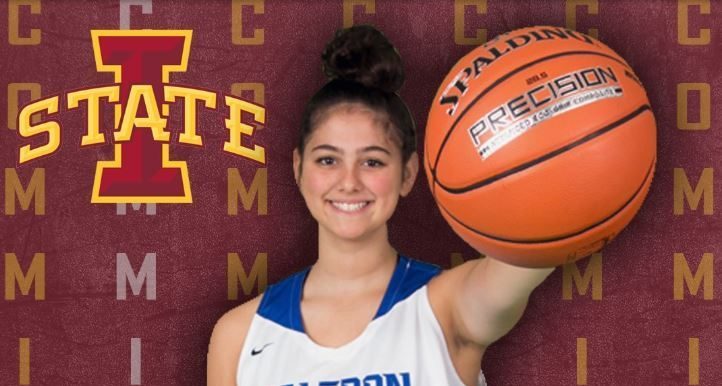 The Iowa State basketball program – on both the men’s and women’s sides – has had a plethora of success in recruiting Canadian born athletes.

As the latest commitment to the 2021 women’s basketball class, Izzi Zingaro hopes to be one of the next greats from the North.

Although it played into her decision, it wasn’t the biggest reason that Zingaro picked Iowa State.

“They’ve always been really nice people while I was being recruited,” Zingaro said. “When I went to visit it was really welcoming. The players came right up to me and introduced themselves.”

It was easy to tell that had hit home with Zingaro.

She spoke highly of the sense of community she felt during her visit to Ames.

“Family is something that is really important to me, so it was great to see that,” Zingaro said.

Of course, Iowa State pitched the Canadian angle, too.

After all, Carleton will go down as one of the, if not THE, best player in program history at Iowa State.

It’d be a disservice not to go in strongly with that.

“Yeah so I knew about Bridget Carleton,” Zingaro said. “They brought her and her success there up a lot. They definitely mentioned how much they enjoy having Canadian players (in Ames).”

Not to mention, Iowa State coach Bill Fennelly has had tremendous success in the past with international players, in general.

Alison Lacey – a star on the 2008-09 team that went to the Elite 8 – hailed from Australia. Just off last year’s team, Ines Nezerwa and Adriana Camber came to Iowa State from Burundi and Sweden, respectively.

They’ve had tremendous success recruiting from outside of the United States.

However, for Zingaro, the focus was more on those players’ careers than the places that they had come from.

“I didn’t really focus on where the players came from, because I wanted to see how they panned out,” Zingaro said.

Zingaro has been a star with Team Ontario as she progresses through her high school career.

She was named to the all-Ontario basketball first team this year – on a group of five players that included two of the top commitments in the class.

Rightfully so, Zingaro tried out and made the U17 Canadian National team last summer – one of the same teams that Carleton played for.

“It was a great experience,” Zingaro said. “I got to go to Chile and play with and against some amazing players. It made me get better and push myself throughout the summer.”

Although she has been just about everywhere that a player her age can be in basketball, it doesn’t make the high schooler’s transition to college any less daunting.

At the very least, though, the culture that Fennelly and his staff have produced helps even things out.

“I knew for a couple of years now that going to the states is something I was going to do,” Zingaro said. “It’s a little bit scary, just because moving away from my family is going to be hard, but Iowa State is very family-oriented. It makes me not so nervous on that part.”

Zingaro will have one more season of work to put in before going to campus in Ames.

Still, she already looks like another stellar piece in a phenomenal string of recruiting for the well-tenured staff.

“I really look forward to playing for Iowa State,” Zingaro said. “I think it was the perfect match for me.”