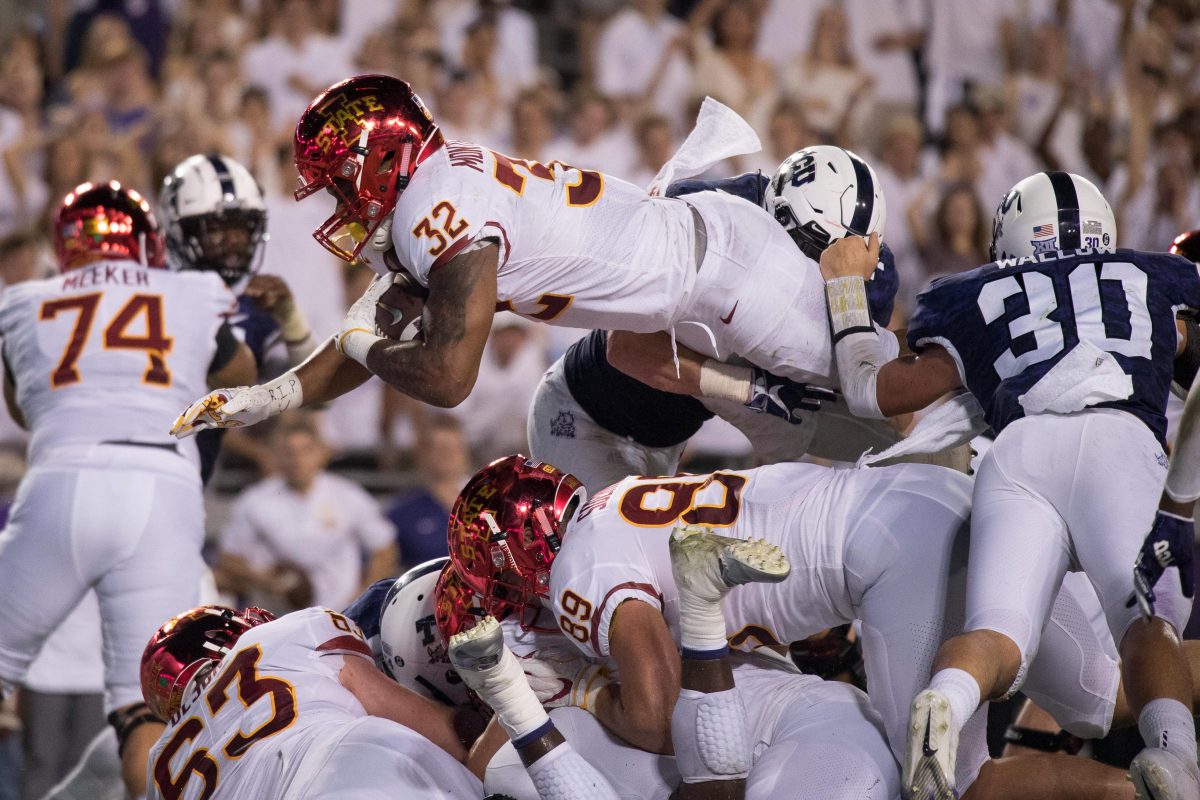 AMES — Who’s the next David Montgomery at Iowa State?

No one, of course — and not just because the NFL rookies ended their respective Cyclone careers among the best in program history to ever play their positions.

“We’d love to be multiple,” ISU coach Matt Campbell said at his first Tuesday news conference if the season. “We’d love to have the ability to attack in different ways. And certainly we didn’t do that the last couple years because we rode our best players. I think now, with some of those better players, or veteran players being at quarterback and the offensive line, it certainly allows you to, I think, be a little bit more multiple in your attack and how you do things. So I would say that’s probably the starting point for us. Until we see who grows into what roles as the season goes along, I think it’s a little bit of an unknown.”

And that’s fine — for one obvious reason, which Campbell noted above. Brock Purdy is ISU’s quarterback and the offensive line finally looks poised to come into its own, moving from promising, but flawed to consistent and high-achieving.

“I think it’s just to put the load on us,” said tackle Julian Good-Jones, who is expected to make his team-leading 38th consecutive start in Saturday’s 11 a.m. season opener against Northern Iowa. “Hold us accountable and have everyone put their trust in us and know that we’re going to do our job. Kind of lead the way for those young (running backs).”

Of course, they’ve got to “prove it.”

Purdy shined as a true freshman last season, going 6-2 as a starter while breaking the school record for passing efficiency (169.9). The offensive line went from shaky to solid as the season wore one — and perhaps played its best game as a unit in the 28-26 loss to Washington State in the Alamo Bowl.

The group’s improved dramatically in both a physical and mental sense. Hand placement is on point. Footwork is good. The five-as-one mentality has finally taken hold.

“They’re guys that have probably physically matured to (being) really close to where they’re going to live as a football player, in terms of being the most physically developed that they can be,” Campbell said. “So I think those certainly aid to our process a little bit and then I think the second part of it is there is competition, finally, to where if you’re resting on your laurels, if you just come to practice and you’re getting through it, it’s really hard to get better as a football player.

“Our sport — especially the offensive line — it’s such craft you almost have to perform in at such a high rate to maybe maximize your full potential. I’m not saying those guys haven’t had that, or haven’t had to do that in the past, but without competition, I think it’s allowed those guys to maybe lack in development maybe at times to where they need to be. I think now you’re seeing a competition. You’re seeing veteran growth and you’re seeing a physically more mature football team in terms of offensive line play than we’ve had. So I’m excited to watch that group and see where that group is.”

So whether it’s Johnnie Lang getting the bulk of carries, or Breece Hall, Sheldon Croney or Kene Nwangwu, the holes are expected to be more sizable. Montgomery thrived without much help, thanks in part to his one-cut quickness and punishing  running style. The less-experienced players now vying for playing time in his stead should enjoy better push up in front of them.

“I always say that David Montgomery was the perfect running back for Iowa State when he came here,” Campbell said. “David didn’t need many blockers, you just needed to get in peoples’ way and give him a chance to get started and he can make something happen. Thank goodness we had David because if we didn’t, it would’ve been a great challenge to actually hand the ball off to somebody and have success. We weren’t great those first few years, but there was great progress as the season went along last year. Now, you lose somebody, and you want to anchor that offensive line, or the tight ends, or the receivers. I do think there is a lot on the offensive line’s plate right now to just steady the ship as we work through, who is that running back, who are those running backs and what do those moments look like and not making one of those running backs have to be a super hero and be David Montgomery. They just have to be the best version of themselves they possibly can be.”

That’s all Campbell asks of anybody, but thanks to Purdy’s budding stardom and the slow, steady and possibly successful build on the offensive line, it appears they’ll each have room — and time — to grow.

“Certainly being able to build it through the offensive line and quarterback is where you would love to be as a program,” Campbell said. “We’re finally at that point. That’s our foundation.”

Will senior defensive end JaQuan Bailey notch a sack in Saturday’s game against the Panthers to become ISU’s all-time leader?

Who knows, but by any measure, his development into an all-Big 12 caliber edge presence has been marked by dogged determination and a willingness to learn.

And Bailey enters his senior season with 18.5 career sacks — so it’s almost certainly a matter of when, not if, he stands alone atop the record book.

“I think JaQuan, one of the things that my expectation for him is for him consistently play in and play out, game in and game out, to be the absolute best JaQuan he can be,” Campbell said. “I think he’s earned the right to get to that point because what we’ve seen him grow is the consistency to raise up and be his best when his best is needed. JaQuan obviously was a great talent as a freshman; showed flashes, really inconsistent. I think year two saw him gain some consistency into his game and still maturing both on and off the football field. I think what you saw last year is you saw a guy that in some big moments made some really big plays for this football program. I think now it’s going into his senior year — can you be your best consistently every snap and every play? I think that’s the maturation process for a greta player like JaQuan. I think, really, what caused it is his work ethic. I would compare his work ethic much and similar to what David’s work ethic was like. He was a guy and JaQuan’s a guy who’s constantly here. He’s here when nobody’s watching. He’s the guy on Friday nights, Saturday nights, Sunday mornings — he’s in here perfecting his craft. And JaQuan’s obviously got a great passion for what he does. Yeah, we’re gonna need his best and, really, that’s my expectation from JaQuan.”

CADRE OF RUNNING BACKS “GETTING THERE”

There’s a lot of buzz around the program about Lang having a standout fall camp. Does that translate to him starting Saturday against the Panthers? That’s anybody’s guess — but with Nwangwu banged up — and Hall also turning heads in camp, it’s unlikely to matter who plays the first snap. There should be plenty to go around.

Same goes in a receivers room missing Butler’s towering presence. Joe Scates is another name that keeps popping up this fall as someone who could make a sharp impact, but even if his progress slows, Deshaunte Jones, Tarique Milton, Landen Akers, along with transfers La’Michael Pettway (Arkansas) and Darren Wilson (Butler Community College) provide a panoply of options for Brock Purdy to choose from on any given play, or drive.

“Our system allows us to really disperse the football across the field to who’s open and to what the defense is trying to allow us,” Campbell said. “To be able to take advantage. Fortunately or unfortunately for us, some of our best playmakers have been guys that we’ve said, ‘Man, we’ve been in some of these situations. We’ll just force-feeding these guys the football.’ So I think it’s the growth of our system a little bit. It’s probably the growth of Brock a little bit, but I think naturally, too, you look across our board right now, I do think there’s some depth at those skill spots. There’s guys that we feel really comfortable with that can make plays and I think the quarterback is starting to feel that way to. So I think all of that will maybe lend itself to maybe having the ability that maybe (we’re) not being so centered on one person all the time.”

“You’re always excited for that first game and it’s always just so hyped up. There hasn’t been football for awhile, so I think I still have that excitement of the first game and I’m even excited because this is my last ‘first game.’ It will be a surreal moment.” —Senior wide receiver Deshaunte Jones on whether the first game tingles feel the same, from year one to year four 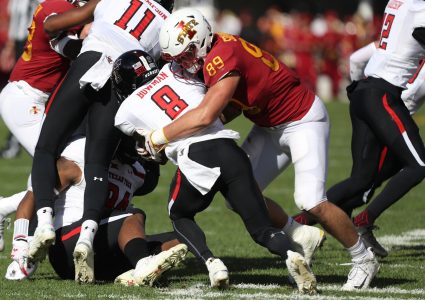