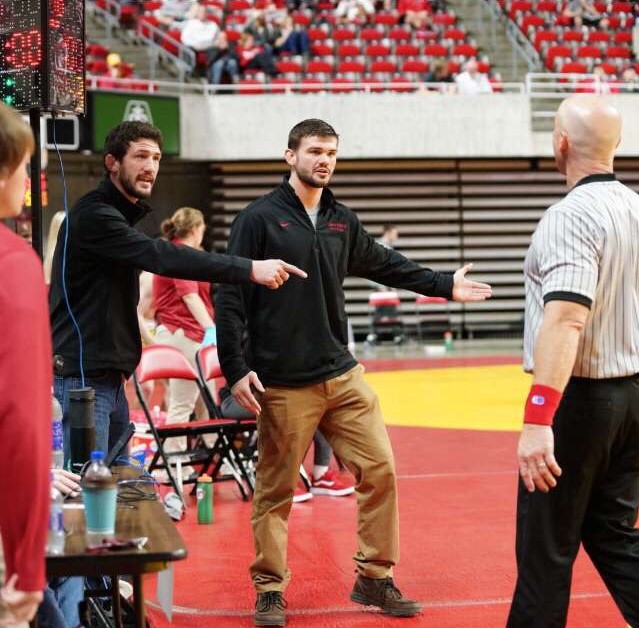 How do you give up something you have done your whole life?

That was the tough question Skyler St. John had to ask himself in September, just a month after starting his last year of college and final season of eligibility.

When your body is your own enemy

For the Cedar Rapids native, injuries were not anything new. It has seemed at times like Skyler knows more about being hurt than healthy. That’s been the case for much of his college career.

It all started with a shoulder injury his true freshman year at the University of Iowa that led to him missing the entire season. What followed were two years with strained LCL and MCL’s in both legs that ultimately resulted in a torn LCL (right leg) his junior season.

His redshirt senior year rolled around and a torn ACL finally brought his future into question.

“I tried wrestling through it,” Skyler said. “I got a PRP shot and all that stuff. I still struggled with it all the way up until I was done.”

Skyler took the stage against Ohio on Dec. 16 before he hung up his singlet for good to have season-ending ACL surgery.

“It was emotional to watch his last match,” freshman Logan Schumacher said.

The redshirt senior lost that match 4-3 that day. When he came off the mat the score did not matter. His coach and older brother Derek St. John took him in for a hug.

“It hurts you,” Derek said. “You don’t want to watch any of your athletes get hurt, especially not your brother.”

Derek was the first one to approach Skyler. The brothers were out hunting which is one of the things the two of them love doing.

“I guess the conversation isn’t an easy one to have first of all, with anyone, and it’s even harder when it’s with your brother,” Derek said. “It was a conversation that I laid it out there for him. I’m a pretty straight forward person and so is he, so we saw eye-to-eye on it. He knew it was in his best interest moving forward in life and being able to enjoy his college days.”

Derek, head coach Kevin Dresser and assistant coach Brent Metcalf had all agreed that it was better to have a Skyler who could walk at 60-years-old over securing another guy on the mat.

“I told him that I thought it was probably best that he gets it done [surgery],” Dresser said. “There comes a point when your body isn’t working for you. You have to pick the road that’s going to be the most beneficial for you the rest of your life.”

Skylar didn’t show it, but the decision was a difficult one to process.

“It was very hard to hear at first and it hit me pretty hard emotionally,” Skyler said. “It took me a solid week to just really think about it. Do I really want to give up or do I want to stick it out the rest of the year?”

Skyler is a man of few words. Being the easy going, funny guy in the room comes natural to him. Being emotional and open about his feelings does not.

“I came to the conclusion that I’ve struggled with injuries my whole five years in college so why beat up my body more especially when I am not seeing the success I wanted to see?” Skyler said.  “It was a tough choice but I still stick with it and think it was the right choice.”

Where it all started

Skyler was only three years old when his wrestling career began.

In fourth grade, he had to learn how to adapt to major life changes that came from his parents divorcing. With so much chaos at home, his interest in wrestling plummeted. But, he didn’t quit.

It wasn’t until he had the opportunity to start varsity at Prairie High School his sophomore year that Skyler found the spark again.

The Prairie High alum finished conference runner-up his sophomore and junior year. He put all his energy into improving. His senior year, he walked away conference champion at 160 pounds. Skyler also led the team in takedowns his junior and senior season along with a Most Improved award his junior year.

When it came to college, he followed in his brothers footsteps. He earned a scholarship to wrestle for the Hawkeyes.

“I’m not going to sit here and talk bad about Iowa but I didn’t enjoy my time there inside that wrestling room for certain reasons,” Skyler said.

Making the decision to transfer was easy the moment social media alerted Skyler that his brother would be coaching at Iowa State.

“I think he was ready to get out of the situation he was in,” Derek said. “It was perfect timing. He was ready to move on with his life with the previous situation. It’s easy when your family is there and you’re only realistically moving two hours. For him, it was a no brainer.”

The hardest part about transferring for Skyler was waiting for the rest of the team to start buying into the culture the new staff brought to Iowa State.

“The two cultures when I first came here where crazy in difference. The wrestling room was so much different, and it took a little bit of time to get used to,” Skyler said. “It took a little bit of time for the coaches to change the guys mentality, work ethic, their social life and the way they were living. Once that started coming around it felt back to normal. It was perfectly fine.”

For the staff, bringing a guy like Skyler on their team was important.

“From my point of view, he came from a mentality that we had,” Metcalf said. “So, when we first walked in it was a guy who brought instantly what we were preaching and the mentality. It helped. It was a really great asset to start off with.”

Skyler walked into the wrestling room ready to grow in the rebuild.

“He’s an Iowa kid, obviously I’m partial to him because he’s Derek’s brother, but he just brought a toughness to our room and a really good work ethic,” Dresser said. “That’s what we needed especially starting brand new, Getting a guy in the room who understands hard work and is a good example in the room is important.”

For Skyler, he had already been around Derek and Metcalf. Dresser was new for him.

“He [Dresser] knew that I was an upperclassman and that my body was beat up. He gave me that freedom to get what my body needs and he knew that I knew what my body needed. He accommodated me,” Skyler said. “It really changed my wrestling in the wrestling room because my body felt so much better and fresher. I could see my wrestling progress more and more through the two years that I’ve been here verse the three years I spent at Iowa.”

Brothers in the wrestling room

Not everybody gets the opportunity that Derek and Skyler were given. That’s why it was so easy for Skyler to know he was transferring. Not only has Derek gotten the chance to coach his brother, but they’re roommates.

“We’re pretty close. We’re very similar,” Skyler said. “We like to do the same things like going hunting and being outdoors. Living with him has been pretty great because we’re both kind of neat-freaks. We haven’t had any problems living together as far as I know.”

When asked to go more in-depth about the relationship he has his with his brother, Skyler almost couldn’t find the right words.

“He’s someone I’ve looked up to and idolized since I was a little kid. I’m never going to tell the guy no, I am always going to do what he says, unless I absolutely disagree with him,” Skyler said. “Being able to work with him and spend time with him in the wrestling room is a pretty special opportunity. Not many people get to do that, especially in a wrestling world. It’s been very—I don’t know how to explain it. It’s just very special.

Derek is the oldest sibling in their big family. Skyler comes third. For the two brothers, some would even call them twins. For Derek, putting into words what his brother means to him was just as difficult.

“I had the first crack at everything. I always sought to be a good example. The fact that he does respect me and look up to me means a lot to me,” Derek said. “One of my biggest motivations was having my family look up to me. Give them a good example or something to cheer for, to point at you and say ‘that’s my brother’. It’s humbling to have a sibling look up to you like that.”

Not only did Derek set a good example for his younger brother but ultimately helped him grow on the mat in his last two years.

“I think he understands me more than I understand myself sometimes. When he sees I am struggling or not doing the best that I could be doing he kind of pulls me aside and tries to steer me in the right direction,” Skyler said.  “When you wrestle very similar to someone like that and maybe your technique can still be worked on, it helped me jump levels in the wrestling room and on the wrestling mat.”

Taking on a new role

Skyler was given two options on what came after his surgery: walk off into the sunset or stay and help the team.

“I was 100 percent about staying and helping the team in any way I possibly could,” he said.

The selfless decision to actively give back to the team drew the admiration from the staff. It was a reminder of just what a dedicated athlete they had on their roster. For a quiet, lead by example guy, Skyler quickly became a mentor to the younger guys and was given the opportunity to help coach unattached guys at weekend tournaments.

“To me, it’s really encouraging because you can have a guy who gets injured and wants to sail off into the sunset and disappear, that’s ok if they want to do that but that doesn’t help our team,” said Metcalf. “For him to be selfless after that injury and want to continue to give back in whatever way he can means a lot to me.”

Although being injured caused several setbacks for the 165-pounder, he continues to keep cool and look ahead to what is next.

“I don’t want anyone to feel bad for me or anything like that. It is what it is and that’s the way life goes,” Sklyer said. “I think a lot of fans just don’t understand people’s injuries throughout college. They always want a good show.”

For Derek, it was important for people to know his brother cared more than he could show.

“At the end of the day he’s one of the toughest, hard nosed guys that I know. For me to say that, that’s not easy,” Derek said. “I’ve known some pretty tough guys and his heart was in the right place and he wanted to go out and win for Iowa State, for me and all his family. At the end of the day it is what it is.”