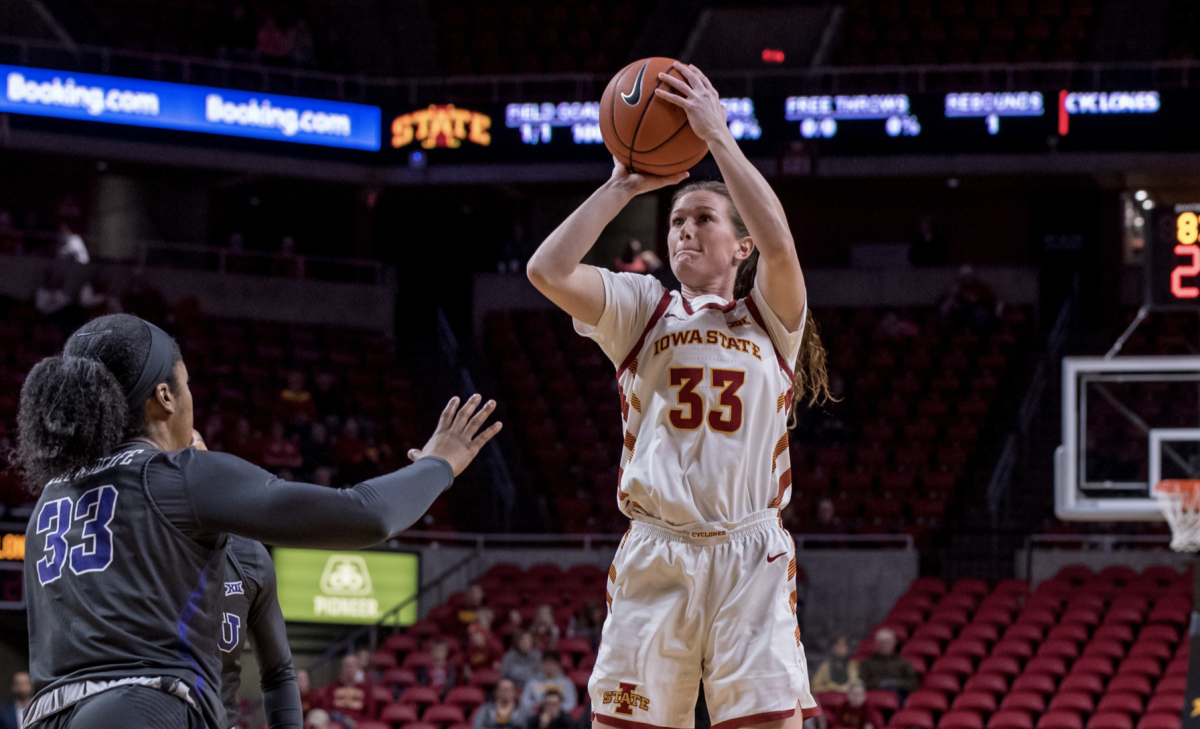 Just like its matchup with Kansas State a week ago, Iowa State used a major second-quarter push to extend a small lead and eventually pull away to win by – get this – exactly 38 points.

“I think we’ve played really well as a team [over the stretch],” senior Alexa Middleton said. “Tonight was a great win and that’s big for us moving into this next game.”

“This is a really special group of kids, and I’ve been blessed to have a lot of them here, but this group is one of those,” coach Bill Fennelly said. “They get it. They understand. They have that we-over-me mentality.”

The Cyclones continued to improve their perfect home mark, as the record at Hilton Coliseum now sits at 11-0 for the team. That comes one season after Iowa State had its worst home record under Fennelly, going 7-8 at Hilton in the 2017-18 season.

“It’s nice to see that our home court advantage is what it should be,” Fennelly said.

The first quarter ended with a low-scoring, 14-10 battle that featured seven Iowa State turnovers. Iowa State came out of the first break in a seemingly completely different gear, much like they have during every game during the win streak in the second quarter.

Since losing to Iowa, the Cyclones have seen seven straight games where the team has outscored its opponents by more than 10 points before pulling away and winning.

In six of the seven of those matchups, Iowa State has held its opponents to 12 points or less (the exception was 14 points against Drake).

“I don’t know if it takes us a little bit to get used to the game, but we’re working on really putting four quarters together,” Middleton said. “Coach keeps stressing the first quarter and how our first quarter needs to be like our second quarter. We’re working towards that.”

The Chatham, Ontario, Canada native ended the first quarter with two points and the second half with five before exploding for 24 points, 10 rebounds, and seven assists by the end of the game to help lead her team to the win.

Carleton lead the team in each of those statistics and was also at the top of the stat sheet with three steals.

“We have the best player in the league on our team, and I know that will be debated forever, but for what she is doing for our team at this moment in time is really unlike anything I’ve seen here in a long time,” Fennelly said.

Carleton played similar basketball for the Cyclones last year, when she averaged 19.2 points for the team. After her 24-point game Wednesday, she is up to 19.9 points per game this season.

The difference between this year’s 13-2 squad and last year’s 14-17 finish to the season is that the Cyclones are playing with their superstar, according to Fennelly.

Fennelly said going down the roster of Cyclones who played in the game that there was not one that didn’t do something at both ends of the floor that impacts success.

On the other side of the court was Ashley Joens, who was probably knocking down another 3-pointer to add to Iowa State’s already dominate night. Joens, an Iowa City native, finished the night with 22 points, tying her career high to go with nine rebounds.

“When my teammates can get me the ball when I’m open and I can knock down a few, that really boosts my confidence and gives us some momentum,” Joens said. “It’s big when that can happen.”

Fennelly stressed that Joens is not just a shooter.

“We put her on Kianna Ray tonight,” Fennelly said. “She guarded Christianna Carr from Kansas State. She guarded Kylee Kopatich from Kansas. It’s not just Ashley Joens shooting in threes. We’re challenging her to be a great basketball player, not just stand on the wing and wait until [Carleton] throws it to you to shoot it.”

Fennelly said that Joens has embraced that role, and even said the freshman could be a better defensive player than Carleton.

On the offensive side of things again was Kristin Scott. For the second straight game and third this season, the sophomore has had a perfect game shooting from the field. Scott is the only player to have a perfect game from the field twice in her career in Iowa State history, let alone three times in one season.

“Obviously she is going to miss sooner or later, but the kid can really shoot,” Fennelly said. “We’re just going to tell her to keep shooting it.”

The Cyclones will hope to get some more of that stellar play against the No. 13 Longhorns on Saturday.