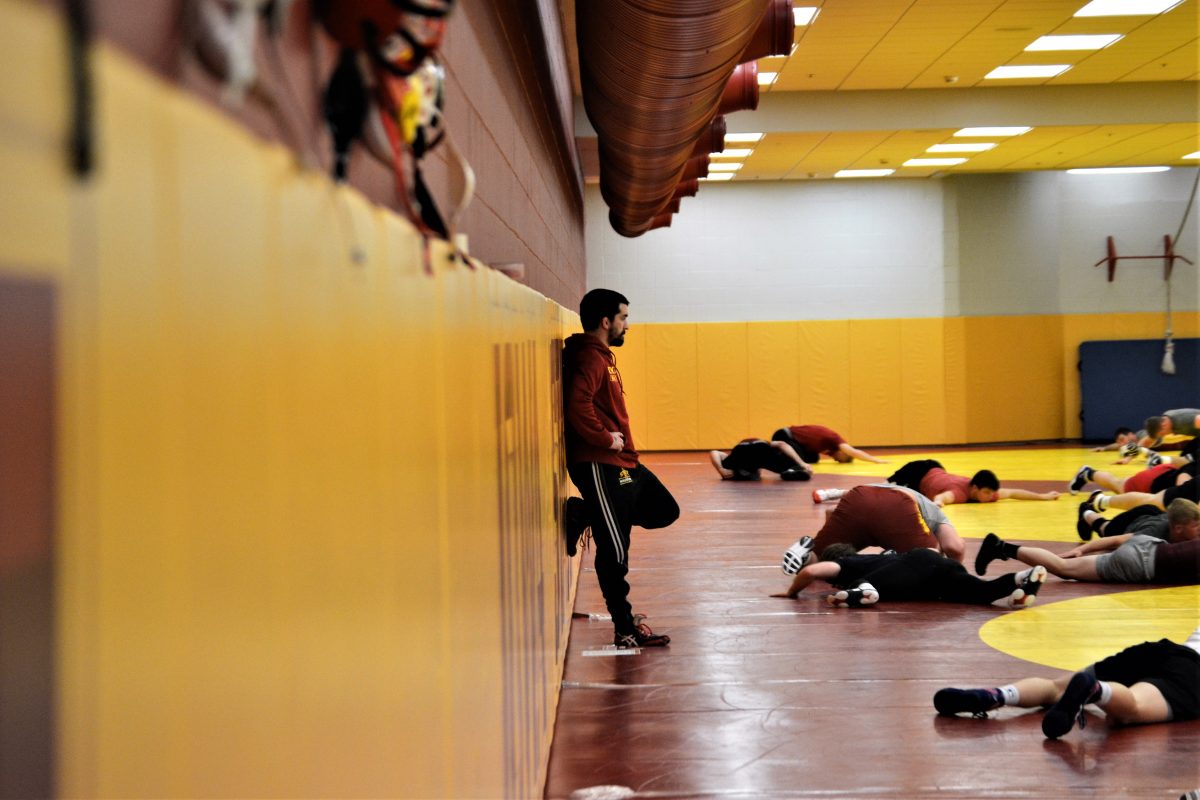 AMES  — Although walking out of Carver Hawkeye Arena having lost only by one point is a big step in the right direction, the rebuilding of Iowa State’s wrestling program is just getting started.

“Generally, I feel like we competed really well,” assistant coach Derak St. John said earlier this week. “At the end of the day, we didn’t get the ‘W’ and I’m not okay with that. I relayed that to this team and I’ll never be okay with losing.”

Dresser is out on the recruiting trail out East so Coach Metcalf and Coach St. John stepped in for this weeks press conference.

“We didn’t get the W and I’m not OK with that” #Cyclones pic.twitter.com/YpNaYrRzlV

What was learned from facing Iowa

“From top to bottom, we want to wrestle their best guys to kinda see where we’re at and not walk out of there with any false hope or wondering ‘what if we had the opportunity to wrestle that guy or that guy,'” assistant coach Brent Metcalf said. “Great effort, exactly everything we asked from them, to wrestle the whole seven minutes and fight every position from top to bottom — we did that.”

There was still a lot to learn from the mistakes that led to the 19-18 loss.

“We have got to be able to get to our leg attacks. We won some pretty close matches which was good and a lot of that was just guts and guys finding ways to win,” Metcalf said. “At 141-pounds in particular we didn’t touch the guys legs one time. We won the match but we didn’t have any leg attacks. That’s the same for Degen and Straw. We fought really hard against some high level competition so now we have to learn how to get to the legs and start taking it to them and then it starts to swing completely  the other way and we start to separate the gap and we’re not winning at the last minute.”

The Cyclones are finally beginning to match their words with actions.

Over 19 different teams are expected to compete at the UNI Open that is held inside of the UNI-Dome this weekend. It might be the last chance fans will have a chance to watch the Cyclones compete in an all day tournament this large.

Among some of the teams that are expected to compete are No. 4 Iowa, No. 13 Purdue, and No. 25 Nortwestern. UNI also comes in ranked at number 17.

Kevin Dresser expressed confidence in a healthy team across the board for all weight classes and expects to take the whole team to compete in the all day event.

Redshirt senior Skyler St. John (165-pounds) will finally return to the mat after a long absence due to a knee injury. Freshman Francis Duggan will also be able to wrestle.

A big question that has been looming is the decision towards David Carr’s redshirt. Dresser has said since the beginning of the season that he would most likely be redshirting him no matter how the season looked.

Iowa State came in at No. 23 in the NWCS coaches poll. Although a major accomplishment for the program, Metcalf stays focused on the bigger picture.

“It’s basically just an opinion of someone else,” Metcalf said.  “I guess for the team, their work is being noticed and that’s really good for them because they see ‘hey we’re being noticed’ and its a good reminder to keep doing what they’re doing.”