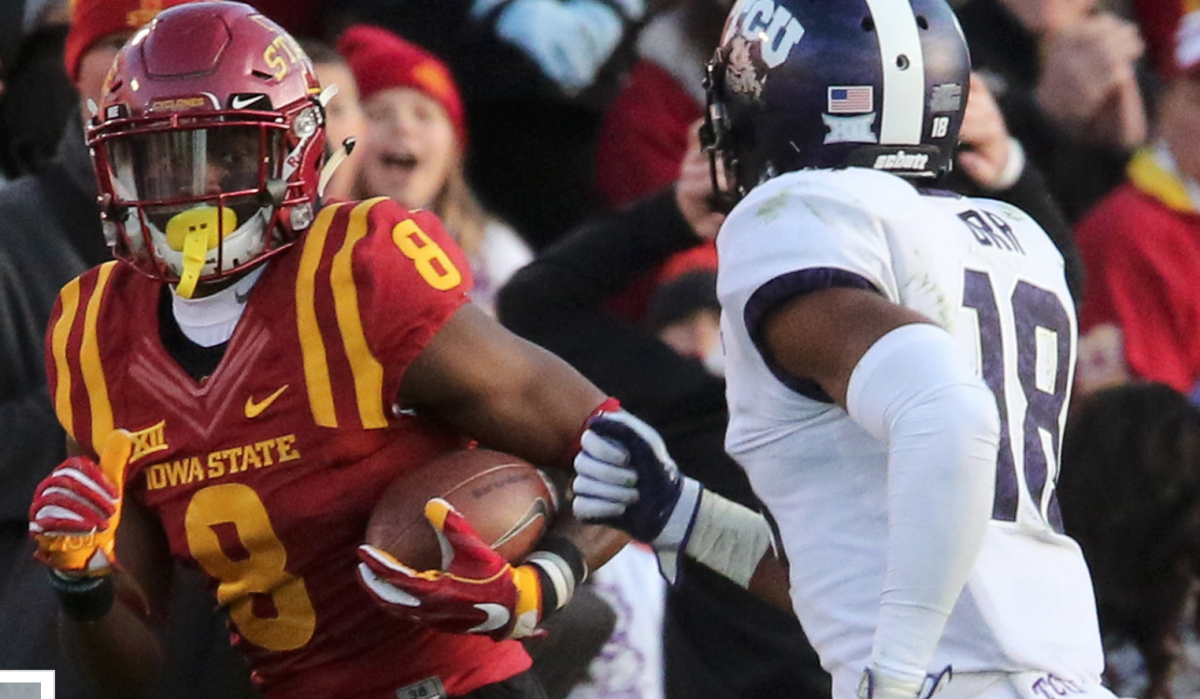 By making more trips to the salad bar than the drive-thru window — and emphasizing good weight over lump-sum readings on a scale.

“I try to limit myself from going out and eating fast food and things like that, so once I started going to the grocery store and getting food from there, it tremendously helped,” the 5-10, 185-pound junior said.

“He’s stronger and faster than he’s ever been,” Cyclones coach Matt Campbell said during Tuesday’s Cy-Hawk week news conference. “He’s kind of worked through that from his freshman year through his sophomore year of gaining weight, but was it the right weight? How do we improve your speed? All of those kinds of things. I think we hit a home run with it, really. He did a great job of managing through that. I think his diet was maybe the biggest thing he attacked in the off season. I think that had a big impact on him. This might be the fastest and strongest I’ve seen Deshaunte. He looks like a different football player today than what he did even last year. I don’t think that’s a discredit to his work ethic, but I think it was diet, strength and condition all coming together as one. He looks like a true third-year football player. I’m really proud of him and I think he’s going to have a great season.”

His speed was evident. The blocking from fellow wideouts Hakeem Butler and Matt Eaton was superb. The play call, perfect.

“Matt and ‘Keem had great blocks,” said Jones, who scored six touchdowns as a three freshman, but none last season. “That just really helped me out, so shout out to them.”

Jones’s heightened dedication to his craft make him an X-factor for this week’s 4 p.m. FOX-televised rivalry matchup at Iowa — and in the weeks to come.

He caught 37 passes for 536 yards and six scores as a freshman, but dipped to 28 grabs for 273 yards as a sophomore. That’s still productive, but not as explosive as expected.

It’s why he revamped his offseason routine from the menu on up. More greens, less grease. The formula seems to be working — even if he’s long-awaited return trip to the end zone didn’t officially count.

He knows he’s back. More importantly, his coaches and teammates know it, too.

“It’s all right, whatever,” Jones said of the touchdown that wasn’t. “I can’t really control that. I’m just controlling whatever I can do for the next multiple games that we play.”

CAMPBELL ON IOWA QB NATE STANLEY AND HIS TIGHT ENDS …

“You talk about a veteran quarterback like Nate is, if you just say, ‘I’m going to take those tight ends away,’ he’s good enough and he has good enough weapons around him that he’s going to make you pay. I would say first and foremost, their tight end position, outstanding. It’s fun to watch those guys and the growth those two have made in their program – they’re playing really good football for them right now and certainly did down the stretch for them a year ago. But again, it’s like going against any really talented quarterback, you have to be multiple. You have to have the ability to do multiple things. If you think you’re going to just do one thing, then they’re going to beat you. I think we’ll have the ability to be multiple – how we attack them in terms of defensive football and certainly situational football. A lot of credit goes to them and their team and those two position groups because they’re playing really well right now.”

CAMPBELL’S BEEN ‘CANCELED’ BEFORE

There aren’t many head coaches who can say they’ve had two games canceled ever — let alone twice in the past four seasons. Campbell can. What did he learn from that experience at Toledo in 2015, where the week following a weather-canceled game preceded a 16-12 road upset at Arkansas?

“I think that the veteran leadership of our football team was able to pull us back together and say, ‘Alright, let’s have a great week of practice.’ That’s what we were able to do there. And it’s going to have to be the same response from our end. We lost some meaningful reps and you can make those excuses, but nobody cares. We have to continue to grow and get better just like any team does from week to week. But now you have to do it and you have to do it against yourself and you have to continue to do it in practice. That is one thing I’ve really like about this team, I think we’ve practiced really, really well. Hopefully those are the habits that help us (down the road).”

WHAT WOULD A WIN MEAN? CAMPBELL WON’T BITE

Campbell was asked what breaking through with his first win in the Cy-Hawk Series would mean to him and the Cyclones. His answer: On point and on message.

“Again, and I don’t mean to discredit that in any way, that’s football seasons and football games — you play them one game at a time and one day at a time. You look for this team — we haven’t gotten an opportunity to play a game yet this year in 2018. And now the opportunity to not only go and play a game, a rival football game, a really good opponent on the road, it’s a great challenge and it’s a great opportunity, so there’s gonna be so many lessons learned in that football game that no matter what the outcome, right, wrong or indifferent, it’s the ability to grow as a football team and certainly as a football program. So, great challenge for us. A challenge I certainly look forward to because I know the quality of the opponent we’re going against, and we’ll look forward to certainly making the next step in terms of our football team, whatever that step looks like and feels like.”