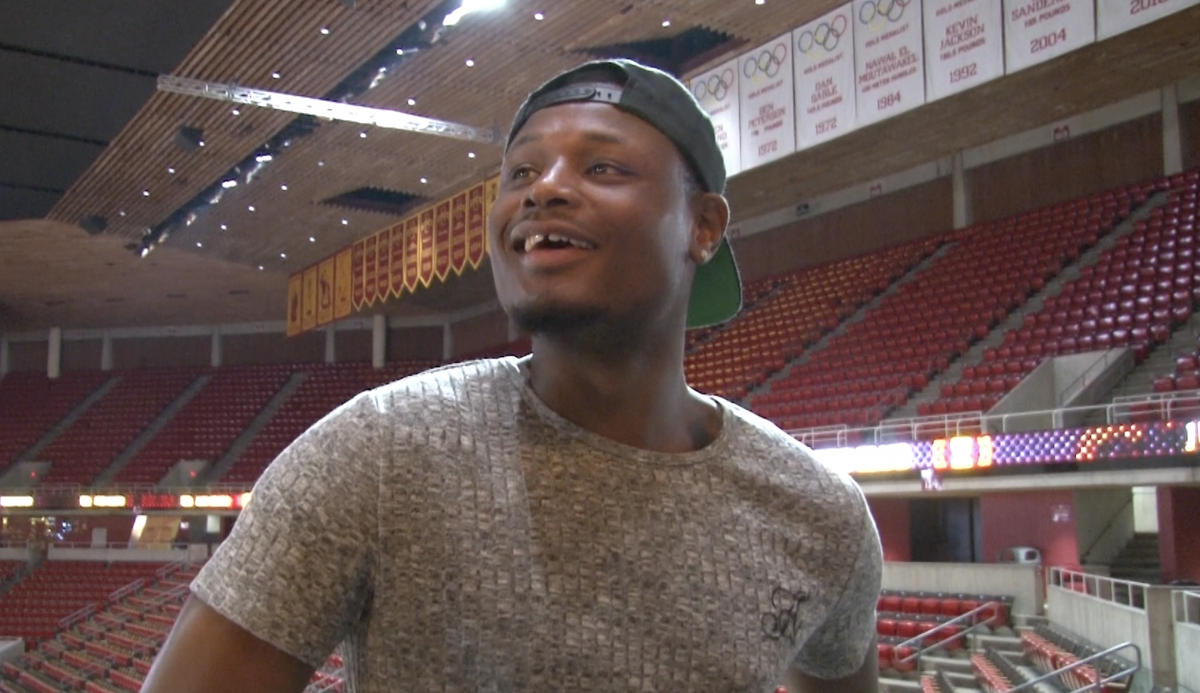 AMES — Deonte Burton came home with a lot of trophies.

The former Iowa State star returned from his year playing in the Korean Basketball League with multiple MVP awards. He won the league’s dunk contest and led his team to a win in the all-star game.

But, the best trophy the Milwaukee native has received was not really a trophy in the literal sense. It was a two-way contract with the Oklahoma City Thunder, bringing him back stateside for his second year in the professional basketball ranks.

“It still hasn’t hit me,” Burton said on Friday prior to Iowa State’s now annual men’s basketball reunion. “Sometimes I think how when I was younger I was playing with the players I might be playing with now (on 2K). I might one day be one of those players to someone little.”

He certainly made serious headway in that area during his year in Korea. The high-flying, smooth-dribbling lefty was unlike most of the players in a league that probably goes somewhat unnoticed on the international basketball scene.

While Burton was playing above the rim and throwing down thunderous dunks, most of the other players were older. Naturally, that made him a quick fan favorite.

“They loved me,” Burton said with a laugh. “It was different. Just because there were a lot of older players there. It’s not slower but it’s slowed down compared to how it is here… The Korean experience was great. The fans are kind of like Hilton (Coliseum) fans, very similar, travel and everything.”

If he can perform at that same level in the Thunder organization, it seems likely that Oklahoma City fans will take to him in the same way. In my time covering athletics (which at this point is seven years), no player has made a bigger transformation from the first time I met them to now than Burton.

It makes him one of my favorite players I have ever covered. It was the reason I was so excited to ask him about his experience in Korea and his impending transition to basketball back stateside.

Without that transformation, Burton would not be rubbing elbows with Russell Westbrook and Paul George, most recently while playing pickup in Los Angeles.

“It was different. It was definitely different,” Burton said of the experience alongside his new teammates.

He clearly shows he can hold his own in a video that surfaced on Instagram of Burton, Westbrook, George and the rest of the Thunder.

Russell Westbrook, Paul George and the Thunder putting in work in LA. 👀🔥 (via @ricohinesbball, @slamonline)

We tried to get him to tell us who the better dunker is between him and Westbrook, the 2017 NBA MVP. He wasn’t taking the bait though.

“I think we’re different,” Burton said. “We’re different types of power. It sounds weird but it makes sense when you see it.”

Both of their dunking styles can best be described as thundering, which is, obviously, fitting. It isn’t clear what kind of role Burton will play with the OKC organization at this point or how much time he will really spend with the NBA club.

If the past is any indication, he will find a way to make his mark on the Thunder. Just like he was able to make a mark on Iowa State and his head coach Steve Prohm. Just like he made a mark on me with his inspirational journey from being somewhat of a knucklehead as a junior to fully buying in and becoming a star as a senior.

He will always be in the top-tier of my favorite players I’ve ever covered and not just because of his dunk against West Virginia in the Big 12 Tournament title game that nearly brought my life to an end (story for another day).

Iowa State certainly needed Deonte Burton during his time in cardinal and gold, but I’m not sure there has been a player recently who more needed Iowa State. You could hear it in his voice when I asked him how the school and program prepared him for his professional journey that is still just getting started.