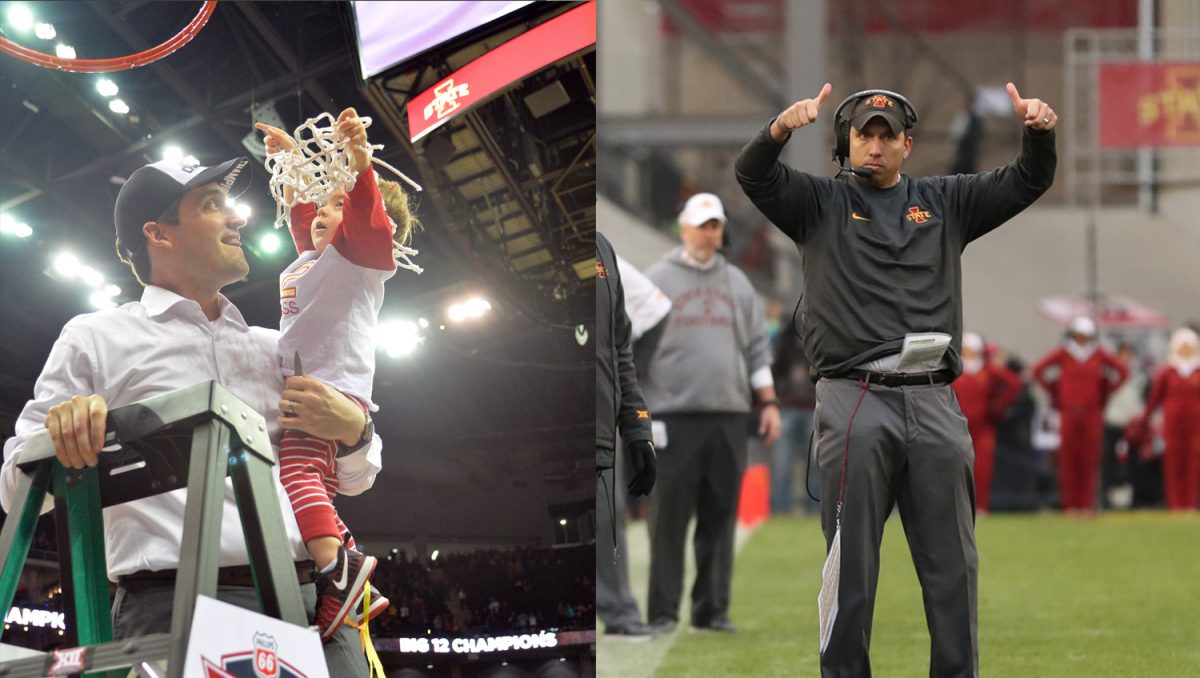 On Friday night, I had a rare opportunity to sit down, have a few cold ones and catch up with some old friends in my hometown. These conversations led to a handful of questions about expectations for the Cyclones in 2018 for both football and men’s basketball.

I love you guys (my Internet Cyclone family) but it was a refreshing exercise for me to do this in a face-to-face setting with people I have known my whole life.

What I learned: People are really excited about next year.

I am too. I’ve written multiple times that I believe 2018-2019 could be the most successful season in the modern day history of Iowa State athletics.

But in talking with my friends (this lasted a couple of hours), I became more and more skeptical about things as time went on. There is just a lot of gray area here that I want to hash out. That’s what inspired today’s column: With what we know in this very moment (always keeping in mind a lot can change between now and the start of the seasons), what are realistic expectations for football and basketball next year?

Let’s map it out…

Team strengths: We can look at this roster and confidently say that it is built the right way – from the inside out. This defensive line should be one of the best in school history. With two experienced linebackers and two lock-down corners on the depth chart, the back end of the defense should be above average to really good. On offense, David Montgomery should be one of the best running backs in the country while Hakeem Butler and Chase Allen are rising stars in the passing game. Kyle Kempt getting a sixth year was a major bonus. Even if for some reason Zeb Noland beats him out, there’s some depth there.

Team weaknesses: Iowa State’s offensive line has some nice pieces and should be better next season. It is still unproven for the most part. Even Matt Campbell has identified this group as a key to program progression in 2018. I still have some doubts about the quarterbacks. Kempt was a solid game manager in 2017 but there are still legitimate questions to ask about his arm strength and ability to consistently outscore other Big 12 offenses. If it’s Zeb Noland, there’s just not enough tape out there on him to know he can lead this team to an upper-half finish in the Big 12. Campbell has earned all of the equity that he currently has with the fan base, but we still don’t know what’s going on at offensive coordinator.

Overall analysis: With less depth and talent than it will have in 2018, Iowa State surprised everyone to rattle off eight wins last year including a bowl victory serving as the cherry on top. Four of Iowa State’s five losses came on the final possession of the game. The Cyclones realistically could have won eight or nine in the regular season, which makes me think that is what most fans will be expecting as a win total in 2018. Still, back to back eight win seasons in years two and three of the Campbell Era would be a massive home run of a hire compared what we expected during the transition. I’d put the W/L number at 7.5 at this point in time and lean towards taking the over.

Team strengths: Iowa State will enter the season with one of the best guards in the Big 12 (Lindell Wigginton) and a post (Cameron Lard) with elite potential. Adding Marial Shayok will be an X-Factor that most people outside of the program don’t quite understand. Nick Weiler-Babb will be back and could compete to garner All-Big 12 type of attention. One of the best recruiting classes in school history will arrive in Ames this summer and while Steve Prohm had a problem of not having enough guys to play last season, he’s going to have a hard time of figuring out who to play in 2018-19. There will be that many pieces at his disposal.

Team weaknesses: The Cyclones will still be relatively young, which in reality isn’t a problem but this group’s lack of experience could be, especially early on. How long will it take all of these talented pieces to gel? And what about finding a few more shooters? The 3-point shot and developing a “defensive culture” (Prohm’s words) are going to be the focus inside of the Sukup Practice Facility all summer long.

Overall analysis: Two months ago, I had this team competing for a Big 12 championship and in the Sweet 16. While I fully believe those goals to still be attainable, sitting back and watching the NCAA Tournament from afar has opened my eyes to the importance of chemistry. I’ve toned down my immediate expectations because that’s a lot of young guys playing this level of basketball together for the first time. I think this is a team that will start off much slower than it will finish. Still, I have the Cyclones comfortably in the NCAA Tournament with plenty of talent to make things very interesting in March.