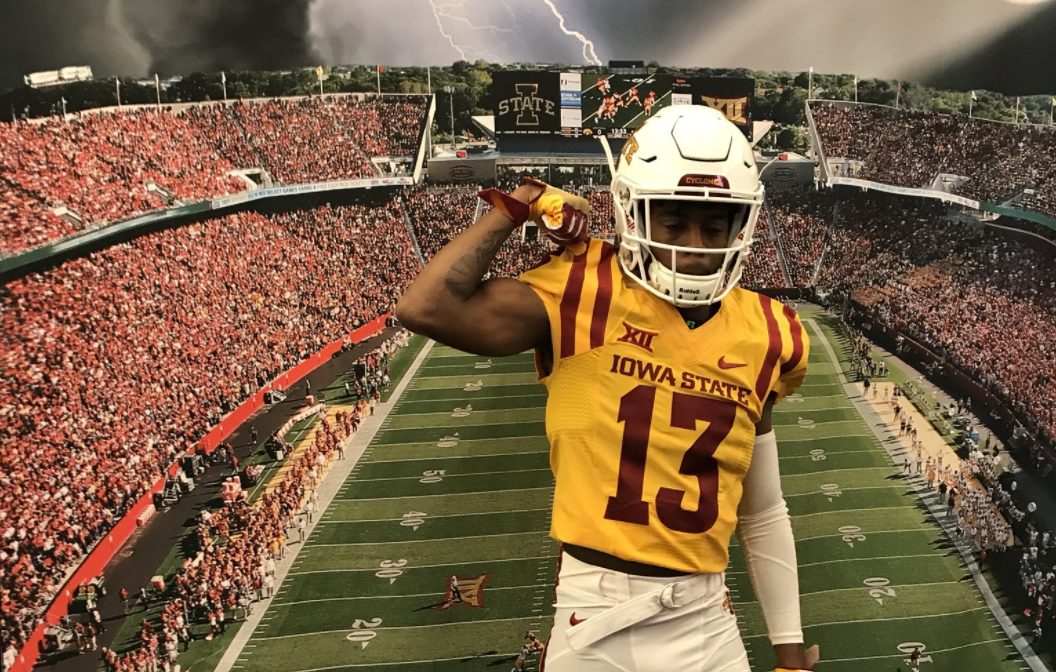 Three-star wide receiver Tayvonn Kyle on his official visit to Iowa State. (Via @x_tayyk on Twitter)

It did not take three-star wide receiver Tayvonn Kyle long to see the passion of Cyclone Nation.

After an official visit to Ames last weekend, the 6-foot, 165-pound Valdosta, Ga. native can tell Iowa State’s fan base has a deep seeded love for its school. That, coupled with a comfortability with the Cyclones’ coaching staff, has put the program in contention to earn Kyle’s commitment leading up to national signing day next month.

“The fan base is crazy,” Kyle told Cyclone Fanatic in a phone interview Tuesday night. “It’s a college town so everybody there pretty much has some kind of affiliation to the college. Everywhere you go if you’re on the team or if you’re a coach or something like that, they all know who you are and they treat their student-athletes with the utmost amount of respect. They praise them down there. They make them feel really special.”

Kyle, who is rated as the No. 129 athlete in the 2018 class by 247Composite, also holds offers from Illinois, West Virginia, Purdue, Wake Forest, Maryland, Georgia State, Central Florida and quite a few other FBS programs. He was committed to the Boilermakers for a little more than a month before decommitting on Dec. 21.

The No. 161 prospect in Georgia picked up an offer from Iowa State a few weeks later on Jan. 11.

“They were pretty cool. They’ve been together for awhile and you can tell,” Kyle said about Iowa State’s staff. “The way they just connect. You can tell that they do a lot together. They have a lot of fun together and coached a lot of ball together. They still like to go out and be able to have fun and play the game the right way, but they also are interested in putting you in the best position to be successful whether it’s on the field or off the field.”

The staff laid out Iowa State’s depth chart at the receiver positions for Kyle during his visit and made it clear to him he would have an opportunity to play special teams for the program. The Cyclones will likely take at least one more receiver in the 2018 class to go along with Oklahoma prospect Sean Shaw, Jr. and Texas prospect Carson Schleker.

Kyle plans to visit Georgia State this coming weekend then hopes to make a decision sometime next week. If he has not come to a decision at that point, he might take a trip to Central Florida before signing day on Feb. 7.

“Pretty much whenever I come to the point that I’ve seen everything that I’m interested in seeing and I feel like I’m making the best decision for myself,” Kyle said when asked how he will know it is time to commit. “I’m definitely focused on the different aspects of academic programs and being able to feel comfortable with the coaching staff as well as the players that are going to be by my side for the next four years, being comfortable with them. Understanding that it’s a decision not only for the next four years but a decision for the next 40 years. I’ve got to make sure to choose the right school and make sure that’s the right fit for me and know it’s a decision pretty much for the rest of my life.”