Greg Eisworth did not have overly high expectations when he set his official visit to Iowa State over the summer. The Trinity Valley C.C. defensive back, who started his career at Ole Miss, did not know much about Ames or the program he was set to see.

The 6-foot, 195-pound safety had started to develop a strong relationship with head coach Matt Campbell and defensive coordinator Jon Heacock, but had little other prior knowledge of the Cyclones besides knowing they play in the Big 12.

What Eisworth found in Ames and at Iowa State opened his eyes. It started a process that ended Sunday when the No. 30 JUCO prospect in the country, according to 247Composite, announced his commitment to the Cyclones.

“I’m not going to lie, it exceeded my expectations,” Eisworth told Cyclone Fanatic in a phone interview Monday night. “I didn’t expect a lot, but I’d built a relationship with Coach Campbell and Coach Heacock prior to my visit and I said, ‘You know what, I’ll take a visit out there,’ and I’m glad I did, because I was very shocked with just Ames itself, Des Moines and the football staff and the facilities.”

This time around, it was those relationships with Campbell and Heacock that set the Cyclones apart.

“I love Coach Campbell and Coach Heacock and how they’ve all continued together since Toledo,” Eisworth said. “I just really like them and the other coaching staff a lot. I feel like I have a great opportunity of getting in there and playing immediately, which is something big for me. With me having three years left, I think me being a three year starter in the Big 12 will really benefit me a lot.”

Eisworth is set to arrive in Ames for the spring semester and will immediately jump into the competition for a pair of vacant spots at the safety positions. He will be one of a handful of players vying for the jobs left open by Kamari Cotton-Moya and Reggie Wilkerson’s graduation, but will have by far the most collegiate experience of the group.

He has continued to build that experience during Trinity Valley’s 2-0 start to the season that has seen Eisworth, who is rated as the No. 2 JUCO safety in the country, collect eight tackles, including one for a loss. The Cardinals’ 25-19 win over Navarro College on Saturday kept Eisworth from watching the Cyclones’ season-opening win over Northern Iowa, but he was able to catch some highlights before making his announcement on Twitter Sunday afternoon.

“I’d kind of had my mind made up for awhile,” Eisworth said. “Really, I was just taking some time to really wrap my head around it and just be 100 percent sure with my decision. Throughout the week, I was kind of just in contact with Coach Campbell and Coach Heacock and eventually I just decided to make it official.” 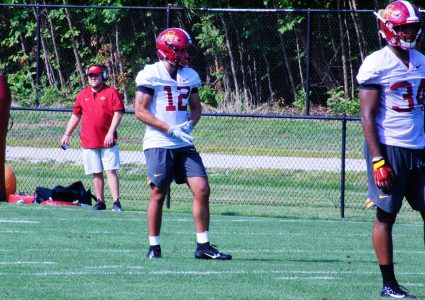