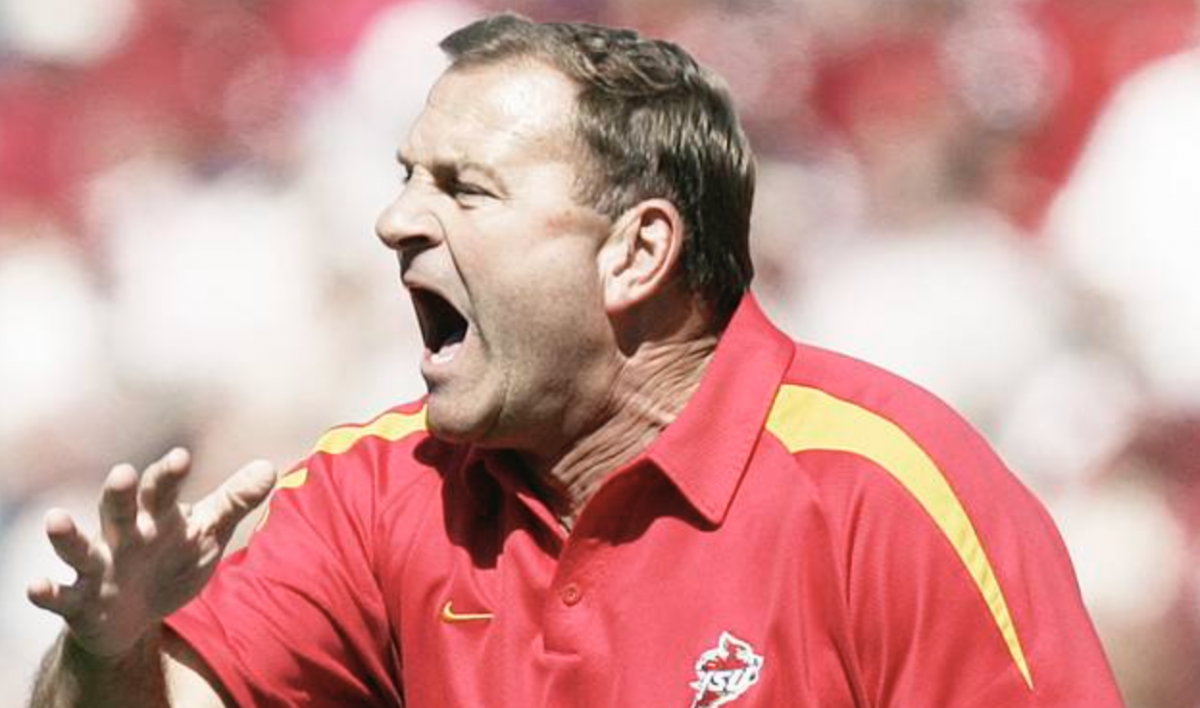 Part of the beauty of the Cy-Hawk game is it marks the passage of time. It is easy to remember where you were and what you were doing during Cy-Hawk contests of days gone by. The 2017 version is setting up to be one of the more anticipated games in recent memory. That said, the 2017 game will have nowhere near the pre-game hype of the 2005 matchup, which was easily the most anticipated game in the series. I was a junior at Iowa State at the time and the amount of smack talk on AOL Instant Messenger was at an all-time high.

That September day in 2005, I called the game on Iowa State student radio station KURE. And thanks to the excellent Cyclones.tv, I re-watched the ABC broadcast of the 2005 game for the first time. It brought back some great memories.

0:00 – We are looking live at a jam-packed Jack Trice Stadium on a 90 degree, windy and sunny afternoon in Ames. Iowa enters ranked 8th in the country coming off a 56-0 thrashing of Ball State. Iowa State is also 1-0, but struggled to defeat Illinois State in its season opener. Vegas has Iowa tabbed as a 10 point favorite.

0:10 – Our commentators for ABC this afternoon are Mike Tirico and Tim Brant. Tirico would rise up the ESPN/ABC ladder and was the lead play-by-play man on the network and started calling Monday Night Football the fall of 2006 until he left for NBC last year.

0:50 — Iowa opens with the ball led by QB Drew Tate, who Tirico calls, “The best in the Big Ten.” The hype for Iowa was off the charts before this game. The Hawks had won nine games in a row dating back to 2004 and had pulled off the Tate to Warren Holloway heave against LSU in the Capital One Bowl. Tate was on his way to becoming a Hawk legend and Hawks were legitimately talking Rose Bowl and National Title. There were hundreds of Tate for Heisman shirts that made the way to Ames that weekend.

2:45 — After Albert Young gashes the Cyclone defense for 35 yards on a counter, Tate passes to his full-back Tom Busch, who is drilled by DeAndre Jackson and fumbles, Matt Robertson jumps on it. Jack Trice is already losing its marbles.

8:00 — The Cyclones have success on the ground against Iowa’s stud senior linebackers Abdul Hodge and Chad Greenway, driving to the 20. Bret Meyer has a pass deflected and intercepted by Adam Shada. The camera shows a Hawk fan doing the chomp thing, which they invented before Florida I assume.

9:20 — We go down to sideline reporter Suzy Shuster, who lets us know there are 30,000 people outside the stadium just there for the party. “This is the most anticipated game in the series since it resumed in the 70s.” Fun fact: Shuster is married to NFL Network’s Rich Eisen.

10:30 — On a 3rd and 2, Tate is pursued and hammered by Tim Dobbins for a huge loss. Dobbins is perhaps the most underrated defensive player in Iowa State history. He became a 5th round draft pick in 2006 and played in the NFL for eight solid seasons.

17:20 — After an Iowa State punt, Brian Ferentz airmails a snap over Tate’s head and Iowa State’s Jason Berryman wrestles it away from Tate. Cyclones are in business inside the red zone. At this point, Brian Ferentz doesn’t want to be a guy in Ames.

19:45 — Meyer throws a strike on a slant to Austin Flynn, who takes it in for six. And Tony Yelk bangs the extra point off the upright, as Mike Tirico reminds everyone about place-kicking issues. Oh Mike, you don’t even know. 6-0 Cyclones. Flynn was originally a highly-touted QB coming out of Texas before switching to wide-receiver to make room for Meyer. Flynn is currently the offensive coordinator at Grand View in Des Moines.

26:45 — Iowa gets one first down, but an Adam Carper deflection on 3rd down stops another Iowa drive, the Hawks offense is getting dominated by the Cyclone front seven. Iowa State defensive coordinator John Skladany and his mustache are pumped.

We have played one quarter and both defenses winning the day.  6-0 Iowa State. ABC’s bump music is Feel Good, Inc by Gorillaz and I’m having flashbacks to Sips on Welch Avenue.

46:00 — Tate throws an awful pass that is intercepted by Steve “Greedy” Paris, Tate rushes up to make the tackle and leads with his head. Tate is down on the turf.  After a minute or two, Tate gets up and is clearly woozy. 8 minutes left in half, still 6-0.

51:30 — Iowa State pounding the ball with Stevie Hicks as analyst Tim Brant heaps praise on offensive coordinator Barney Cotton, “This group is getting better and better.”

53:30 — Iowa State runs the ball on 3rd and 12 at the 15 and gets two yards. The patrons in Ames clearly displeased at Cotton, this happened regularly. Yelk converts on a 30 yard field goal to give Cyclones the 9-0 edge with 4 minutes left in half.

55:30 — Caleb Berg gets a big special teams tackle inside the Iowa 15 on the kickoff. Berg was my neighbor on the 7th floor of Larch Hall freshman year. Good guy.

58:00 — On 3rd and long, Manson is pressured by Berryman, his pass is deflected by Carper and picked off by LaMarcus Hicks, Hicks rumbles 30 yards for the touchdown. This is the single loudest I’ve ever heard Jack Trice, the stadium is literally shaking. Cyclones 16 Hawks 0.

1:17:20 — We go down to Suzy Shuster, who tells us Drew Tate will not be back and that, “Don McCarney likes the way the turnovers have helped his team.” Way to go, Don.

1:28:00 — After a dismal offensive series for Iowa State, Troy Blankenship bombs a punt 68 yards and pins Iowa inside the five yard line. A couple altercations instigate after the punt, “This game is getting salty.” Tirico says this has been a respectable series between the two, not much animosity between fans. Generally, this remains the same, for as silly as Twitter can become (myself included).

1:35:30 — We phone in Hayden Fry from Nevada (the state) to the broadcast, who says “I don’t know what was wrong with Iowa State that they let us win 15 straight times,” Fry always up for a good jab.

1:38:00 — ABC highlights the 1987 Iowa staff that included McCarney, Ferentz, Bob Stoops and Bill Snyder. Snyder is smiling in the photo and looks about 50, so could be a photoshop.

1:43:00 — After a sustained drive, Yelk has a 37 yard field goal deflected and sails wide. This was the last field goal Yelk would attempt in his career. The next week Bret Culbertson took over full time duties and was the Cyclone starter for 3 years, including the Shaggy win over Iowa in 2007. Culbertson now works for Kohl’s Kicking Camp (started by former Iowa State kicker Jamie Kohl) as it’s National Coach and Media Coordinator. He is also one of the nicest people around.

1:49:30 — Berryman, Dobbins and Nick Leaders have lived in the Hawkeye backfield. Manson has no time to find any receivers. Iowa forced to punt again.

2:03:30 — Iowa on the move when Manson finds future NFL tight end Scott Chandler, but Cyclone safety Nik Moser just rips the ball away and forces another Hawkeye turnover. The play is reviewed (replay was instituted that season) and upheld. The Hawk fans start to depart Jack Trice in droves with eight minutes remaining.

2:06:15 — Iowa State goes old school and shoves it right at Iowa with Stevie Hicks. He goes over 100 yards with back-to-back 12 yard runs. Man, Stevie was a great, physical back and was at his best in the fourth quarter.

2:08:40 — After another Cyclone first down, ABC shows a shot of the fans in black and gold leaving the stadium as the Cyclone fans chant, “Overrated.” Tirico chimes in, “The road to Iowa City is about to get busy.”

2:11:30 — Ryan Kock barrels in for the touchdown dagger. Yelk connects on the extra point. Barney Cotton is dancing on the sideline. Analyst Tim Brant says, “This is a program maker.”

2:12:00 – Stevie Hicks is named player of the game after his 28 carry, 120 yard day. He would lead Iowa State in rushing all four years he was at Iowa State despite being slowed by injuries most of his final two years. He tragically passed away in his hometown of Omaha in 2008.

2:27:00 — McCarney gets the Gatorade bath on the sideline. It is his sixth win over Iowa in last eight attempts. It would also be his last Cy-Hawk win.

2:27:30 — The clock hits zero and Iowa State fans rush the field and the goal-post, Tirico says, “The celebration begins with a game the people in Ames will remember forever.”

2:28:30 — Shuster interviews McCarney, “This is no fluke, we have a great program,” Shuster asks how he is going to celebrate and McCarney says, “I have a feeling my house is going to be full tonight.” No question Coach Mac and the rest of the Cyclones had an enjoyable night. I may have seen one or two of them on Welch Avenue myself. Mysteriously a bunch of my Hawk friends that were planning to stay the night had “something come up” back in Iowa City. That night was a Cardinal and Gold celebration.

Iowa dropped to No. 21 in the polls following the loss. They would finish the season 7-5, including a loss to Florida in the Outback Bowl. Tate would return the next game and play well the rest of the season. After going undrafted, he has since had a long career in the Canadian Football League. Kirk Ferentz remains head coach at Iowa and son Brian is now his offensive coordinator.

Iowa State would go on to have the mythical “what if” season. The Cyclones started 3-0 and entered the polls at number 22. The Cyclones would end the season 7-5, but lost three games in overtime and also lost to a Baylor team at home that hadn’t won a conference road game since 1996. McCarney would coach in just one more Cy-Hawk game and was let go in November, 2006. Iowa State has had three coaches since.

But on that day in September, Iowa State was the dominant team and Jack Trice was as loud as it’s ever been. The 20 point margin was second largest ever for Iowa State since the resumption of the series in the 70s.

Fast forward to today and once more Iowa is favored coming into Jack Trice with a defense that is locked and loaded and a confident fan-base. There is no question, Iowa State and Jack Trice will be ready to welcome them.