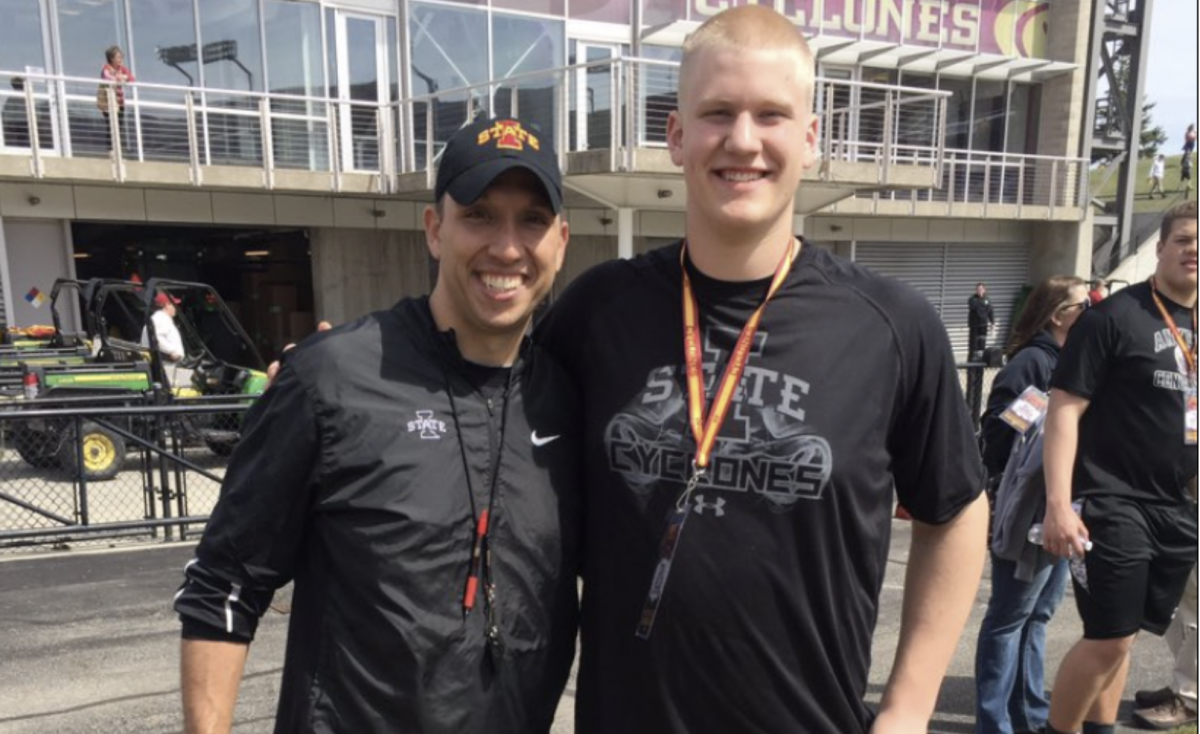 Ezra Miller with Matt Campbell during his visit to Ames on Saturday. (@EzraMiller on Twitter)

Last week, Ridge View offensive tackle Ezra Miller debuted at No. 85 in 247’s initial Top247 for the 2019 class. The 6-foot-6-inch, 275-pound Holstein-native ended his week by picking up a scholarship offer from Iowa State during an unofficial visit for the spring game.

Miller, rated as the No. 10 offensive tackle in the class and No. 2 player in Iowa, already held an offer from Iowa. Now, the four-star prospect holds offers from both major in-state schools before the end of his sophomore year.

“Coach (Matt) Campbell pulled us into his office and we started out with a little bit of small talk,” Miller told Cyclone Fanatic on Sunday. “Small talk to small talk. Then we kind of moved on towards some of the questions we had about recruiting because my parents had already been through the basketball recruiting stuff but they hadn’t done football so we talked about that. We just kind of got to talking about what think I need to do in the future and he just kind of extended me an offer.”

Honored and humbled to receive a scholarship offer from Iowa State University! pic.twitter.com/sGVWXTrlEe

Miller said he was somewhat expecting to pick up an offer from the Cyclones heading into his visit since he knew the coaches had been able to evaluate his film and had seen him on multiple occasions. Miller visited Ames last fall for the Cyclones’ loss to Baylor on Oct. 1.

Iowa and Iowa State are the only schools involved in Miller’s recruitment at this time. Miller, who plans to major in pre-med, said finding a fit academically will be one of the most important pieces of his recruiting process moving forward.

“Their staff is very young and energetic and I like that,” Miller said of Iowa State. “I think they’re a good school overall, but I just need to find the school that fits me best. I still need to do some research about everything.”

There’s still quite a ways to go in Miller’s recruitment before any final decisions are going to be made, but the Cyclones have put themselves in position to battle for one of the state’s top prospects.

“It was fun,” Miller said about his visit. “ I’ve been to regular games too and that atmosphere’s even fun just because there’s a lot more people, it’s just electric. But it’s a neat stadium and I like that.”