Last season, the Maroons became the first team in Iowa Class 4-A football to win three straight state championships. They have a chance to be the first to win four straight this week when they take on Iowa City, West at the UNI Dome in Cedar Falls at 7:06 p.m.

“This week’s been pretty good,” Hummel told Cyclone Fanatic about the lead-up to the title game. “We just go through our routine as normal, for the most part. We actually just practiced up at Iowa State at the indoor facility just to get a feel for the temperature of the dome.”

Hummel, Dowling’s third-leading tackler with 55.5 stops on the year, has played in the last two championship games. He had 6.5 tackles and a sack in last season’s 41-10 championship win over Cedar Rapids, Kennedy.

This year he’ll be lined up against an Iowa City West team that includes Iowa State offensive line commit Alex Kleinow. Hummel said the two haven’t talked leading up the game, but he’s excited to play against his future teammate.

The 6-foot-2-inch, 210-pound three-star recruit (according to 247 Composite), said he’s gotten a few chances to talk with some of the other commits in Iowa State’s 2017 class, which is ranked No. 39 nationally, according to 247.

“We always see each other at Iowa State games and we’ll sit next to each other and talk,” Hummel said. “That’s kind of when we get to catch up for the most part. Occasionally, we’ll text over messages on Twitter and stuff.”

Hummel said a different member of the Iowa State coaching staff will call him almost every week to hear about his latest game, how he’s doing and discuss their season.

Despite the Cyclones having won only two games this season, Hummel said he’s encouraged by what he’s seen on the field and heard from the coaches.

“Honestly, it’s been an improvement,” Hummel said. “I think the only direction to go is up. Obviously, what Coach Campbell is doing is good and it can only improve the next few years.”

Hummel, who also runs track for the Maroons, said improving his speed will be one of his biggest focuses before he steps on campus in the summer. As a junior, he ran a 50.15 in the open 400 meter dash, the 17th-best mark in 4-A, which proves he has quite a bit of speed already.

That said, he knows he needs to get even faster if he wants to make a smooth adjustment to the college game.

“The game will be a lot faster once I get to the college level,” Hummel said.

Worrying about all that will start next week or the week after. For now, Hummel and his team are just thinking about Iowa City, West and the chance to make Iowa high school history.

“It would mean a lot, obviously,” Hummel said. “It’s really cool, because every year I’ve been at Dowling we’ve made it to the state championship and won it. It would be cool to lead on that legacy and leave my spot in Dowling history.” 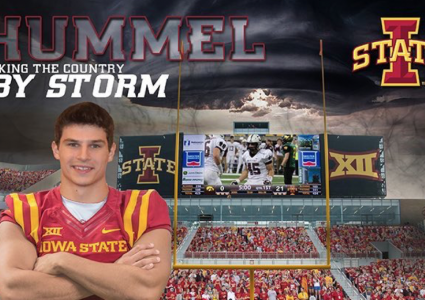