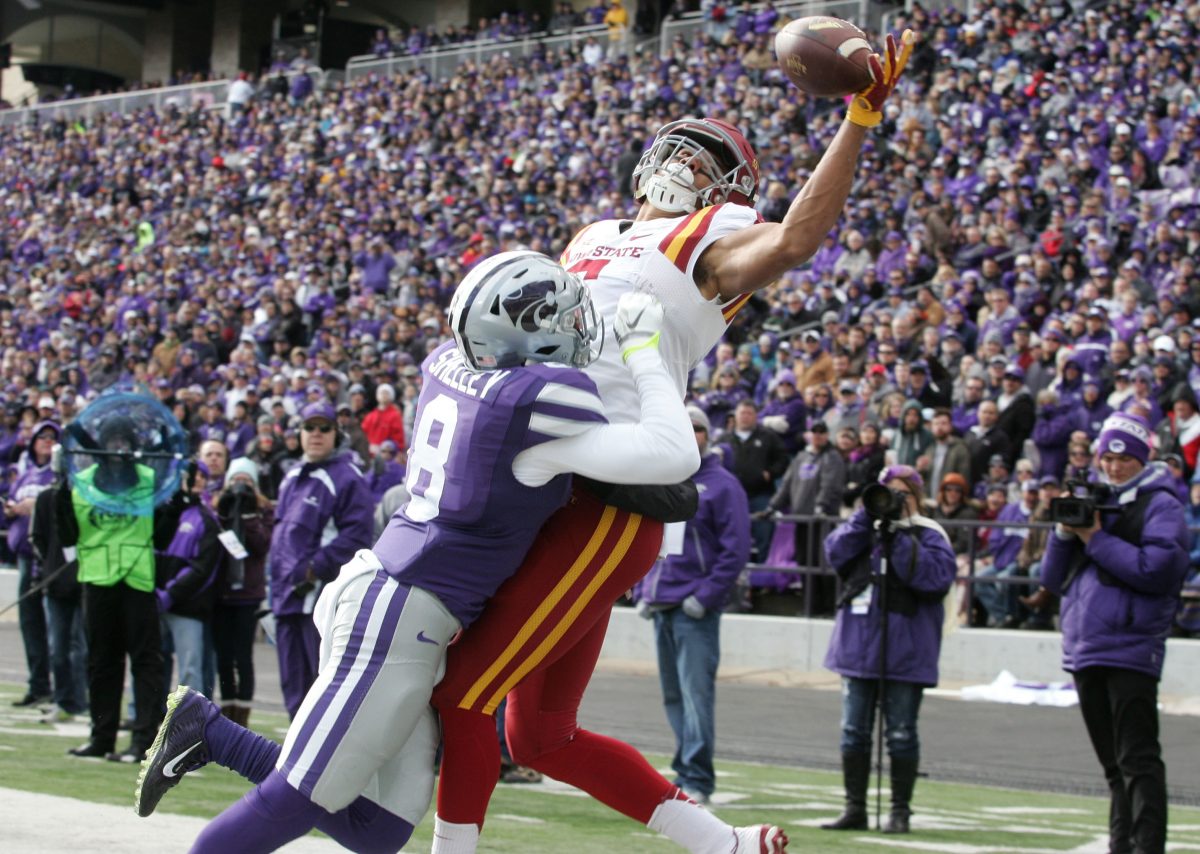 AMES— I’ll start this notebook with some words on … notes.

Seems that ISU’s star receiver AllenLazard is adept at keeping them. His notebook is voluminous, filled with bits of wisdom gleaned from coaches new and old. He’s both a standout and a student of the game — and that alone should have a ripple effect on a position group that’s among the Cyclones’ deepest in terms of sheer talent.

“You look at his notebook, he’s got more notes than anybody else in the room,” ISU’s first-year wide receivers coach, BryanGasser, said of his leading returning pass catcher. “And for a guy that plays and has that type of skill level and has that experience, that’s impressive to me.”

Lazard, a junior, recognizes he doesn’t have all the answers, even now, after ranking fifth in the Big 12 in receptions per game (5.1) and sixth in receiving yards (73.5 per game) last season.

He’s got to continue to lead a group of receivers that includes a lot of length (four expected to contribute are 6-2 or taller) and potential.

Lazard stands 6-5 and will be called upon to use his size and leaping ability even more in Tom Manning’s offense.

“He’s a guy that’s got great size, he’s got great strength,” Gasser said. “He’s strong at the catch point. With us, it’s really working those release moves. We get some of those press coverage situations and just working those defenders off the line and using our strengths to our advantage. Using our size. Using our ability to go up and get the ball and put ourselves in position to where the quarterback can find that spot to get it to us. He’s done a great job of doing that and I think he’s elevated his game even from what we watched last year.”

It starts with ability. It grows through detailed note keeping. Gasser and the rest of Campbell’s staffs made sure players were equipped with pens and pencils and plenty of margins to write in.

Slot speedster TreverRyen’s been scribbling away when he’s not zig-zagging on routes. CarsonEpps is another willing pupil as ISU seeks to rev up an offense that ranked seventh in the Big 12 last season.

Weapons abound, just like the last few seasons, despite notable departures such as Quenton Bundrage.

DondreDaley’s expectations, for example, have grown significantly — and can you believe he’s a senior (I can’t). Adopting yet another new playbook isn’t easy but he sees the potential dividends down the road.

“We all know it’s building to something,” said Daley, who posted six multi-catch games last season before missing the last three because of injury. “Sometimes it gets frustrating, because there’s some stuff from day one that people still mess up on.”

But there’s opportunity amid the frustration.

“I’m running with the twos right now and I understand why — because of the playbook,” the 6-2 Daley said. “I’ve got to get to the playbook.”

Lazard can — and will — her with that. Lots of younger players such as 6-6 HakeemButler and 6-3 DenverJohnson can use his guidance, but it applies to all grade levels.

“He’s a big time leader,” quarterback JoelLanning said. “He runs the wide receiver crew pretty well and everyone looks up to him because they know he’s a playmaker.”

Trever Ryen’s stood out as an “M” guy. So has JauanWesley.

“The reality is that “M” position, we call it our multi-purpose back,” Campbell said. “He’s a receiver. He can be in the backfield. He can do a little bit of everything.”

Ryen and Wesley both seem to fit that mold. Ryen, a former walk-on, possesses track speed (and runs track). Wesley blends wiggle and swiftness. Both will be used a lot.

“Having guys like that is certainly critical to an offense,” Campbell said.

Spring ball may be on its back end, but an even more crucial time looms in a few weeks. Summer workouts — where leaders emerge and coaches determine who’s capable of being self-accountable and who requires constant monitoring.

“I think that’s when you have a program,” Campbell said. “Instead of just a football team, that’s when you have a culture and a program. And programs, where you win consistently year in and year out, the older guys teach the younger guys that these are the expectations, this is how you act, this is how you carry yourself. Then they teach it and they continue to teach it to the young guys coming in. That’s when you’re a football program, not just a football team, so ultimately that’s our job: Create a culture. Create a culture that’s learned and continues to show. And I told our kids really day one when I got the job, if the coaches are coaching the team 80 percent of the time, we’re not going to be very good. But once the players are accountable and they take ownership and they’re coaching the team — and they’re taking care of the issues and the details, then we’ve got a chance to be successful.”

These expectations apply across the board. No exceptions.

“Those are learned traits,” Campbell said. “Those are learned skills and I think we’ve got to work really hard an diligently. Everybody’s got to be on the same page, from your strength staff, to your coaching staff, to your academic staff, and I think holding everybody accountable to the same end goal, then all of a sudden the players don’t have an opportunity to not be successful. They’re either going to be with you or they’re going to say, ‘You know what, this isn’t for me and I’ve got to go somewhere else.’ That’s OK, too. But the reality is you want guys who are going to trust in to what’s being invested by everybody else within the program and we all have to be on the same page for that to even work.”