AMES — For the next two days, all Monté Morris can do is cheer on his teammates.

Iowa State’s star point guard will also shoot left-handed jump shots — and make an unusually high percentage of them — but the strained rotator cuff in his right shoulder is receiving much-deserved R and R as he and the No. 21 Cyclones (21-10) prepare for Thursday’s 8 p.m. Big 12 Tournament opener against sixth-ranked Oklahoma (24-6).

“I’d love to be out there to practice, but my injury, unfortunately I can’t do that, but I’m going to be in here cheering on these guys,” said Morris, who sustained the injury late in Saturday’s 85-78 loss at top-ranked Kansas. “It’s always good to get some rest and like I said, God works in mysterious ways. He just probably made me tweak my shoulder or something, so I could rest a little bit.”

Divine intervention may be the only way to nudge Morris — who played all but 17 minutes during a brutal 18-game Big 12 regular season — to the sidelines.

ISU coach Steve Prohm said he’d like to pencil in a few more brief bench stints moving forward, but the procession of high-level games have called for full-time duty for his record-setting catalyst.

“He’s the one true point guard we have, so it’s just hard to really have him off the floor,” Prohm said. “I need to try to steal a minute or two here and there. I’ve said that, but then actually doing it is another thing. But if you’ve got a chance to get him out at nine minutes and get him out for a minute and a half and rest him, we need to do that. And in the second half, maybe at the 13-minute mark, if the game’s — with so many of these games, we’re so close, and possessions are so important.”

Translation: This extended rest will likely be Morris’s last such period now that tournament time is approaching.

Last season, he sat out a total of 11 minutes in three Big 12 Tournament games and the NCAA Tournament loss to UAB. The season before, he played at least 32 minutes in five of six postseason games. So the term “rest” is relative for the NCAA’s record-holder in terms of assist-to-turnover ratio — and don’t expect him to want any once his team begins its postseason run against the Sooners.

That’s Morris. He’ll talk candidly about fatigue and then refuse to let up. He just plays, plays and plays some more. Former coach Fred Hoiberg said repeatedly that Morris never gets tired. Apparently he actually does, but chooses to regard lower energy as a cue to sharpen up mentally.

“Just trust in your skill,” said Morris, a Bob Cousy Award finalist and first team all-Big 12 selection by the Associated Press. “That’s what the offseason’s for. When I’m tired, dig deep. I gotta make a play for us. I just try to go and just know that you’ve been putting in this work for these times like this. I just try to go.” 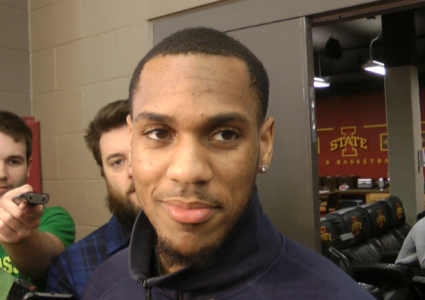