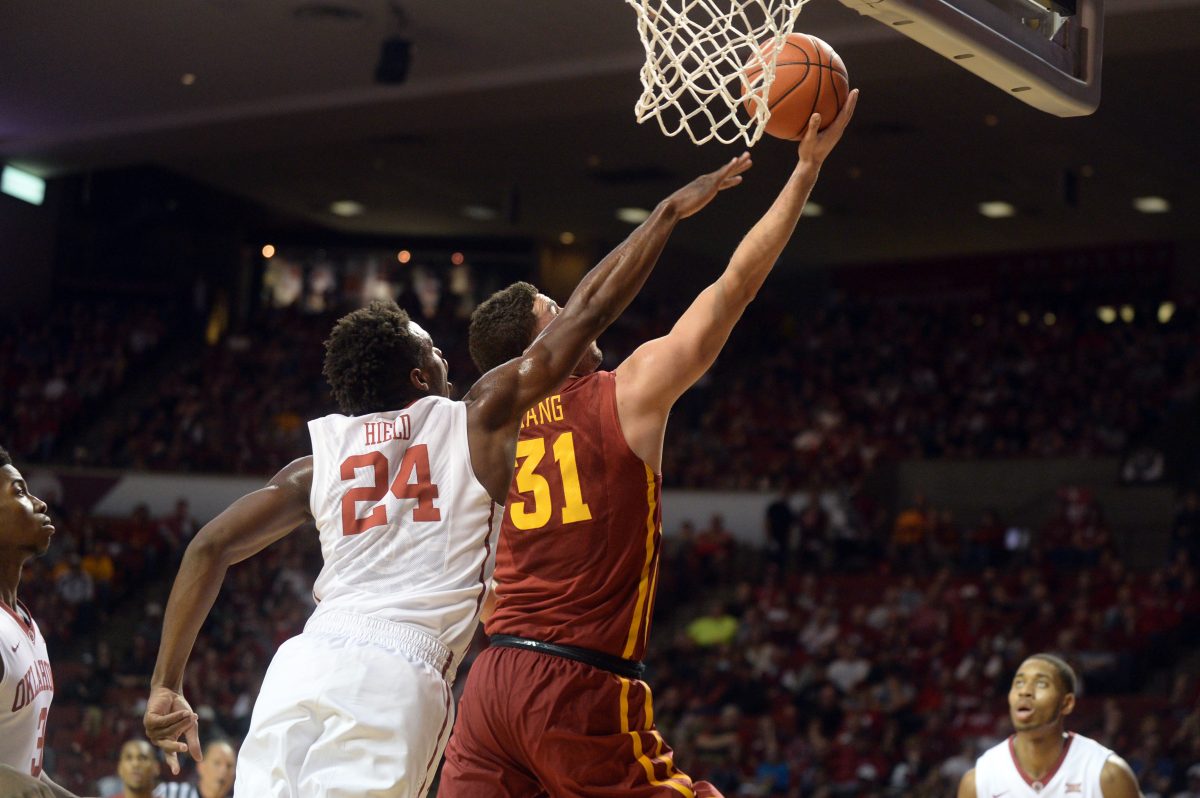 His pass found a wide open Monté Morris behind the arc.

Morris’ shot hit off the left side of the rim and was knocked out of bounds off Iowa State.

"This one really hurts," Niang said on the Cyclone Radio Network postgame show. "There were a lot of positives in this game if you want to stay positive, but obviously we wanted to do a better job of closing out the game and really holding them off to get out of here with a win."

OU’s Isaiah Cousins took the lead away with a 3-pointer to make the score 76-75 with 5:29 left. The points were three of the 15 he scored on the night, all during the second half.

"At the end of they they just made a couple more plays than us," said ISU’s Matt Thomas, who guarded the Sooners’ star, Hield, much of the night. "Their guards, Cousins and (Jordan) Woodard, got going after the were pretty quiet most of the night.”

The Cyclones built a lead during the first half on the back of a stellar performance from Niang and an offense that was clicking on its highest levels. On the night, Niang scored 29 points on 13-of-18 shooting and grabbed eight rebounds.

He got a lot of help from the Cyclones’ newest weapon, junior guard Deonte Burton, as he scored 19 points on 8-of-11 shooting, including three 3-pointers, off the bench.

"I was proud of those guys," ISU coach Steve Prohm said of his team in general. "They made winning plays. Georges drove it, Deonte drove it."

Oklahoma’s All American guard Hield scored 22 points despite his jump shot being off for most of the night. A solid defensive performance from Thomas and Morris on Hield held the Sooners’ standout to just 8-of-23 shooting and 2-of-9 accuracy from 3-point range.

The Cyclones held the nation’s most prolific 3-point shooting team to 37.9 percent, well below their 46 percent average. The Sooners did go 8-of-13 (61.5 percent) from deep in the second half, however.

"We didn’t get it done over the 40 minutes," Prohm said. "We’ll get better from this game, though, in a lot of areas."

OU forward Ryan Spangler added 20 points and 12 rebounds of his own despite tweaking his knee during the second half.

Morris (12 points) and senior forward Jameel McKay (10 points) were the other two Cyclones to score in double figures.

Iowa State will be back in action Wednesday when the Big 12’s most surprising team, 11-1 Texas Tech, visits Hilton Coliseum for an 8 p.m. tip on ESPNU. The Red Raiders opened conference play with a win over Texas Saturday afternoon.

"This is huge," Niang said of the possible rebound against Tech. "We’ve really got to come out on the defensive end and get stops early and really impose our will. That’s something we’re looking forward to doing. It’s not going to be easy, but that’s what we’re here for.”