AMES – Cole Netten may be one of the best kickers in college football, but he is far from the busiest guy on the team during Iowa State’s fall camp.

While the offense and defense are in meetings, the Ankeny native and other specialists play video games. The game of choice is FIFA, the soccer game that is among the best-selling video games in the world.

Who is the best? That’s an easy one for Netten to answer.

“Me, right now,” Netten said. “We have a tournament almost every day and I think I’m leading in wins.”

He doesn’t have a go-to team. They hit the random team button twice and play.

When he isn’t scoring virtual goals, Netten is putting in work out on the practice field, but the kickers still end up with the most down time of any position group.

He says there are usually 18 periods left in practice after he finishes his kicking work.

“I’ll stretch, a lot,” the 6-foot-1, 224-pound junior said with a slight smile. “As kickers, we practice tackling, because it could happen. We also do a little bit of fitness run.”

He was honorable mention All-Big 12 last season after going 11-of-14 on field goals, including the memorable game-winner against rival Iowa. He also converted on all 35 PATs he attempted.

It might be tough for Netten to top all that this season, but head coach Paul Rhoads knows Netten has the consistency to make it happen.

“He has the ability to immediately know what’s off and correct himself,” Rhoads said. “If you don’t have that, you’re in trouble.”

Netten is still trying to figure out to the wind situation in the newly renovated Jack Trice Stadium. He says the addition in the south endzone has caused the wind to swirl more than it did in the past.

“I made one in practice from 55-60,” Netten said. “But then I also had one from 35 that barely made it there because it was swirling so much.”

He will still get a few more chances to get out on the field at Jack Trice and figure the patterns out and is confident that he’ll have it down by the time the Cyclones take the field against Northern Iowa.

Netten is a player that isn’t short on confidence. He doesn’t get shaken, whether he’s under the lights at Jack Trice Stadium, or in the locker room of the Bergstrom Football Complex on the virtual soccer pitch.

“For me, kicking is huge mentally,” Netten said. “If there is a mistake on somebody else’s part nobody notices, it’s all on you.”

Netten seems ready to get the season started in just more than two weeks, but until then he will accept beating his teammates on the soccer pitch.

“The other guys aren’t very good,” Netten said. “That’s what it really is.”

Not a very confident quote from a guy that’s ready to prove how confident he is on the football field.

*** Rhoads seems to be looking for more consistency from sophomore punter Colin Downing.

*** Downing says he has been humbled during fall camp.

“Spring ball went really well for me. I had a really good spring. I think I kind of got a step back somewhere in there. This fall camp has really kind of humbled me in a way. It’s just taught me to work on the little things and definitely a little bit of a struggle. But we are starting to get back to where we were at the end of last season.”

*** The Cyclones will scrimmage under the lights at Jack Trice Stadium on Saturday night. Stay tuned to Cyclone Fanatic for late night updates after it is over. 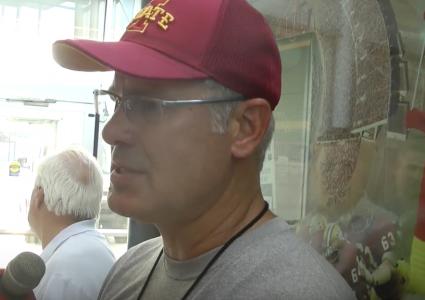