Conference realignment is back in the news. Well, kind of.

Over the last few years, anytime that I’ve brought up expansion to any of my sources across the Big 12 landscape (and because of my fascination with the topic, I have admittedly done this quite often), I have fundamentally gotten the same response.

“It just doesn’t make any sense financially,” to paraphrase what they say. “The schools out there who are expansion candidates don’t bring enough to the table when it comes to television revenue to make it worth our while.”

This is when the whole “cutting the pie 12 ways instead of 10” conversation predictably reappears, eyes are rolled (theirs, not mine) and the talk comes to an abrupt halt.

This might very well be the truth. The way it has been explained to me by people I trust, simple economics say that it is. However, this almost seems like a programmed response coming from men wearing suits who are associated with the Big 12 Conference.

It is almost like all of these people have sat in a room and come up with one answer to give when these types of questions about potential expansion are asked.

This is why I am so happy about the comments reportedly made at an Oklahoma regents meeting on Wednesday by school president David Boren. According to Ryan Aber from The Oklahoman, Boren said that the Big 12 should “strive for” 12 members.

Guering Emig, also from The Oklahoman, dropped these Boren quotes on Twitter:

“I like being 12 rather than 10. I like that as long-range stability for the conference. Is it urgent? No.”

“We should (expand) if we can find the right partners…Something we should strive for while we have the time, stability.”

A few thoughts immediately come to my nomadic mind…

— David Boren is a powerful man. This guy is a former Oklahoma governor and United States senator. No offense to Steven Leath, but Boren is a guy who can actually make a league-wide impact if he wants to.

This has been my greatest fear when it comes to the Big 12’s future.

As an Iowa Stater, I personally have approached this topic by simply being thankful that we didn’t end up in a watered down Big East five years ago.

In the back of my mind though, I inevitably wonder two what ifs: What if the Longhorn Network doesn’t work out? What happens at the end of the 13-year Grant of Rights agreement that is currently in place within the league?

Hell no, I do not trust Texas. Neither should anybody else in the Big 12. Despite what a few pieces of paper might say, the league never has and still doesn’t feel stable – to me at least.

This is why a group of 10 millionaires sitting around a room agreeing with one another on the topic of expansion isn’t good for anybody. The Big 12 is here today because at the time, it provided a way for Texas to make the most jack (thanks to ESPN and the Longhorn Network). It had nothing to do with our friends in Austin caring about saving the rest of the league.

I doubt these comments made by Boren yesterday will actually do anything.

And for the record, I still have the mindset that trusting the people in charge here is the best way to go (although this piece of information that I’m still learning more about says that we shouldn’t trust anybody). At the end of the day, why wouldn’t they want to make more money? It’s common sense and Business 101.

But I am glad to see somebody with power stand up and challenge the status quo. That is how great organizations blossom.

Dialogue is a very positive thing. Adding two schools and a championship game should always be on the Big 12’s radar and if that makes sense financially, then the options need to be explored exhaustively. 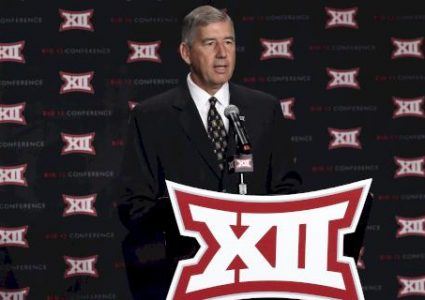 WILLIAMS: OWH column on ISU/Big Ten interesting but just that