The Iowa State women’s basketball team (18-12, 9-9) is set to make its ninth straight and 16th appearance in program history, in the NCAA Tournament on Friday.

The Cyclones enter the tournament 17-15 all-time in the big dance and are looking for their first tournament win since defeating Gonzaga in the first round in 2013.

The 10th-seed Cyclones’ opponent in round one of the Albany region will be an unfamiliar one, as they will take on the seven-seed Dayton Flyers (25-6, 14-2 Atlantic 10) for the first time in program history.  Dayton made their first NCAA Tournament in 2010 and hasn’t missed one since under head coach Jim Jabir.

The Flyers finished second in the Atlantic 10 during both the regular season and conference tournament, with all three of their league losses coming to No. 19 George Washington.

The Flyers are led by a high-scoring offense that averages 75.8 points per game, which is good for 20th nationally.

Dayton’s offense is powered by efficient shooting that has helped them land in the top-10 in 3-point percentage (37.6 percent, 9th nationally) and top-35 in field goal percentage (43.7 percent, 33rd nationally).

It’s Hoover that makes the Flyers go, as she averages 6.5 rebounds, shoots 44.9 percent from 3-point range with 71 makes and a team-high 3.3 assists. She also enters the game fifth on the Flyers’ all-time scoring charts.

Fans can expect a high-scoring affair due to the Flyers’ ability to get up and down quickly and score the ball. The Flyers aren’t a great defensive team, allowing 63.8 points per game (163rd nationally), which should make it possible for the Cyclones to get out and run as well.

The Cyclones and Flyers will tip from Lexington at 11 a.m. Friday. The game will be televised on ESPN2.

Three other teams to watch in the Albany Region

** #1 UConn (32-1) – The Huskies enter the tournament as the No. 1 overall seed and the champions of the American Athletic Conference. UConn is chasing its 10th national championship and its 16th trip to the Final Four in program history. They are looking for their third consecutive national championship.

** #5 Texas (22-10) – The Longhorns were highly ranked throughout the season and entered Hilton Coliseum on Jan. 10 undefeated and ranked No. 3 in the country. Texas lost to the Cyclones 56-57 that day and then lost to ISU again at home 58-57 a little over two weeks later. Their best player, senior forward Nneka Enemkpali, suffered a season-ending knee injury in January. The Longhorns still have a great deal of talent and if they get hot there is potential for a deep tournament run. 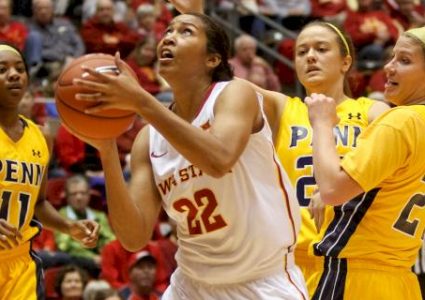