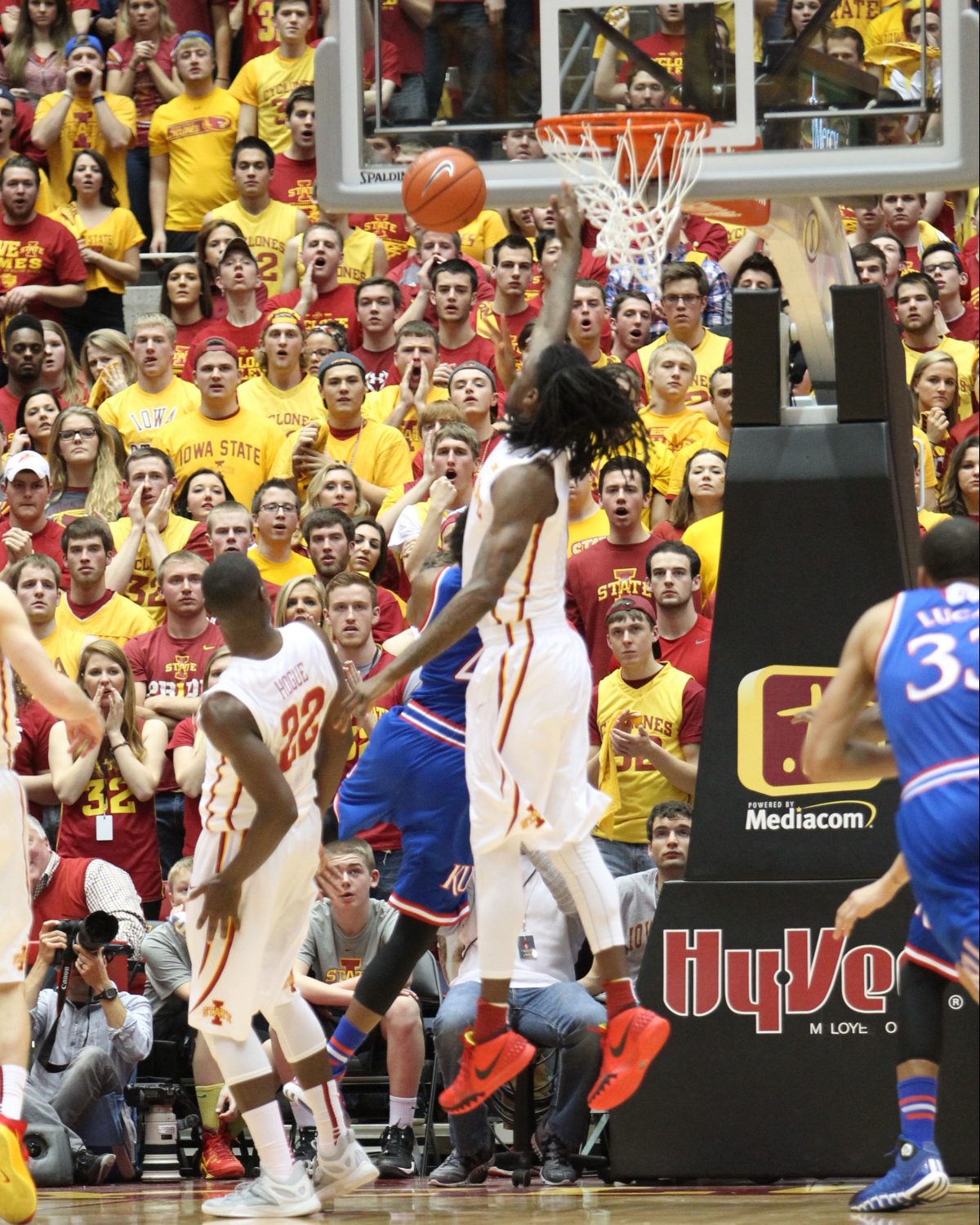 AMES — Pulaski High School track coaches liked what they saw as Jameel McKay ran the floor as a senior standout in Milwaukee.

Naturally, they approached him in hopes of making him a two-sport star. Politely, he rebuffed them, for one rock-solid reason.

“I wanted to focus on one sport,” said McKay, whose turbo-charged heroics helped boost the No. 9 Cyclones to Saturday’s 86-81 win over No. 11 Kansas at Hilton Coliseum.

So soaring into sand pits didn’t figure into McKay’s future plans. Slam dunks — including Saturday’s alley-oop flush off his roommate Monte Morris’s assist — most definitely did.

“We got one down,” said Morris, who owns 19 assists to two turnovers in the past two games. “There should be plenty more to come.”

Why surprising? The Wildcats (11-7, 4-1) have gotten hot immediately on the heels of a three-game skid started by a stunning 58-56 home loss to Texas Southern.

The jewel of K-State’s rapidly resuscitating resume? A 66-63 overtime win at No. 19 Oklahoma.

“To go into Oklahoma and win there is pretty impressive,” Cyclone forward Georges Niang said. “And then they’ve handled business since then. So obviously we’re going to have our hands full. They know us. They’ve seen us play. They’re probably gunning to knock us off too, so it’s going to be a great environment (Tuesday at Hilton Coliseum) and a great game.”

The sometimes unstoppable sophomore guard has played his way out of Wildcats coach Bruce Weber’s doghouse, but four fouls kept him on the bench most of the second half in his team’s 63-61 win over Baylor on Saturday.

So clearly K-State can find a way to emerge victorious without Foster, which fuels its growing confidence.

“They deserve to be No. 1 in our league right now,” Cyclones coach Fred Hoiberg said.

Hoiberg also said McKay — who sparked a 16-4 second-half run against the Jayhawks — may soon deserve more minutes than the 21.1-per game average he’s enjoyed since becoming eligible on Dec. 20. But there’s one problem: McKay’s still learning to progress from flat-out sprinter to at least a middle-distance runner.

“You look at that little stretch he had (against Kansas) and he needed a break,” Hoiberg said, “He asked me to come out of the game. So I guess (when) he can go longer stretches with getting himself in better shape, you may see his minutes go up a little bit as time goes on.”

*** WILLIAMS; Is Kansas State a contender or pretender? ***

The guy they call “Showtime” (thanks to Morris, who goes by "Big Game") doesn’t mind sixth man status, either. He said headlining at the beginning of the game pales in comparison to being there at the end.

“I just don’t really pay it that much mind,” said McKay, whose averaging 9.0 points, 5.0 rebounds and 2.7 blocks in seven games. “As long as I’m getting my minutes and I’m out there with my teammates, it doesn’t really brother me. Whatever role is given, I’ll accept it.”

How about the role of fastest Cyclone?

“It would be hard to argue against Jameel,” Hoiberg said. “With the ball, obviously, I’d say Monte is. Probably not Georges, but we’ve got some guys — Dustin is a great runner when he wants to be. Jameel, I think, might be your answer.”

“I’m faster than Monte end to end,” he said. “With the ball, Monte’s got me. I’d probably lose the ball at half court.”

That’s about the only time McKay might hurt ISU in transition, where he goes from defensive rebound to frontrunner in a flash. His speed, once engaged, opens up an array of possibilities, inside and out.

“The things that maybe you don’t notice, or show up in the box score, is when those wings suck in, that’s what creates some open 3s,” Hoiberg said, “Naz (Long) was the recipient of a couple of those. People talk about what Jameel’s impact is as far as rim protector, but offensively he gives you so much because of his commitment to running. He gets up and down the floor and he does it every time. He’s not a selective runner. He plays himself to the point where he can’t play anymore and that’s what you want out of all of your guys.”

NICKNAME GAMES: McKay didn’t always use the term “Showtime” in his Twitter handle. He does now — thanks to Morris, who added to his long-standing “Man-Man” label, as well. “I’m Big Game, he’s Showtime,” Morris said. “It’s just us trying to start something, a tradition here. We want to be known as that around here. I feel like it’s going good. A lot of little kids changing their names to that on social media also, so I feel like we’re getting off to a good start with it.”

SHOOTING STARS: All five of ISU’s starters are shooting between 46 and 61 percent from the field. The Cyclones have hit 57.1 percent of their shots from 2-point range, which ranks fifth nationally.

PURPLE PAIN: K-State has held foes to to 65 or fewer points in 11 consecutive games. To put that in perspective, the Wildcats haven’t strung together that many similarly stingy games since they did it 17 times in a row from Nov. 27, 1982 to Jan. 29, 1983. “K-State defends so well in the half-court,” Hoiberg said. “You want to get a couple easy ones to loosen that up.”