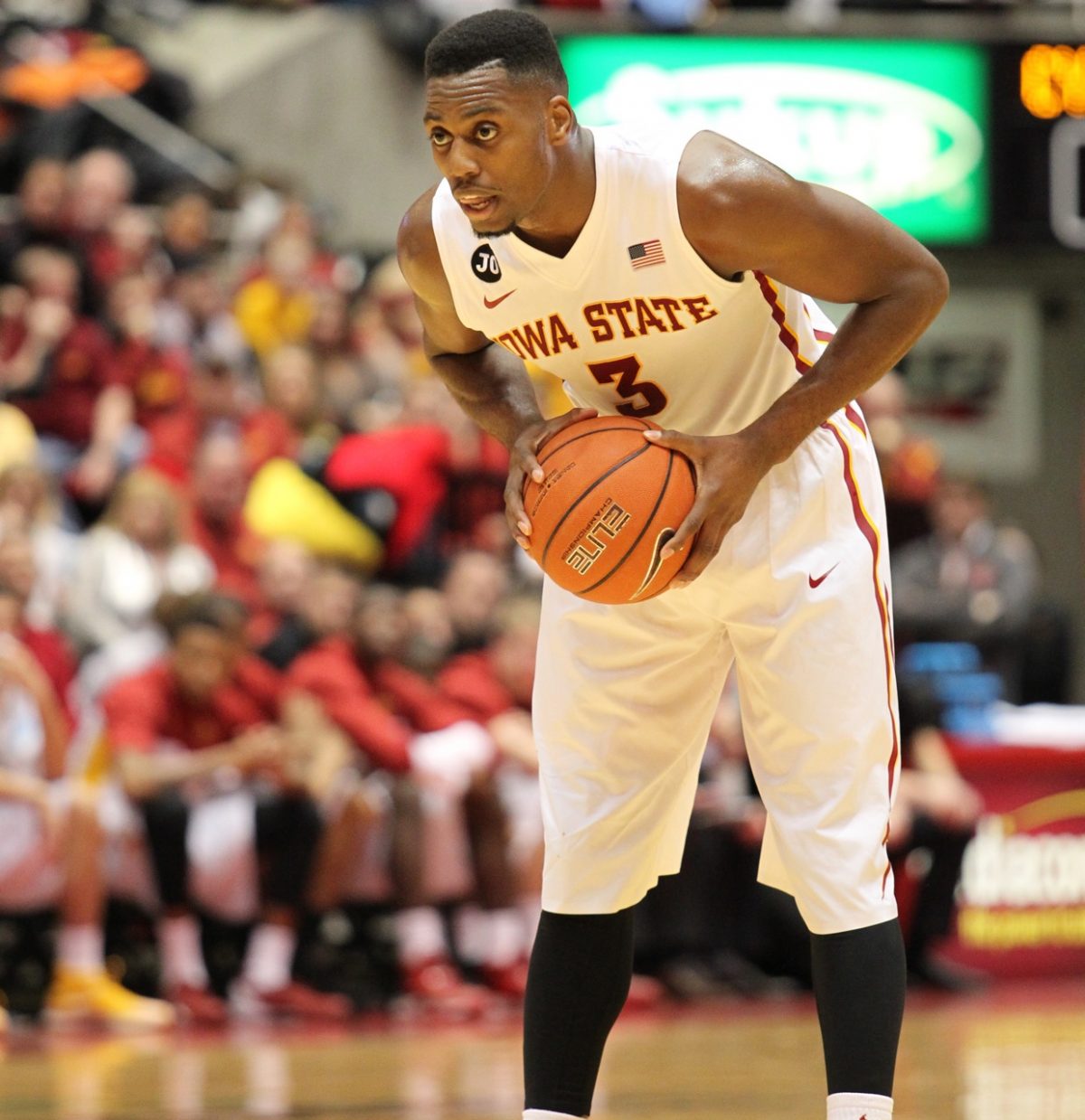 Iowa State basketball fans have witnessed an overabundance of change over the last five years. Fred Hoiberg taking the head-coaching reigns from Greg McDermott in the spring of 2010 was just the beginning. From day one, Hoiberg made it clear that his goal was to win right away and because of that, Iowa State’s new coach went the transfer route.

That plan has obviously worked but when you do that every offseason, October brings forth a wealth of fresh talent for fans to gush about and new-look rosters to digest. Transfers and recruiting intoxicate fans during the offseason and the reliable veterans are generally the ones who are lost in the transition.

Welcome to Melvin Ejim’s world. He has always been undervalued and yet, has always over delivered.

Ejim, a legitimate candidate to be the Big 12’s Player of the Year, will play his final game at Hilton Coliseum on Saturday when the Cyclones host Oklahoma State at 1 p.m. (ESPN). It is easy to forget  that Ejim originally signed to play at Iowa State for Greg McDermott – not Fred Hoiberg.

The bridge between the McDermott and Hoiberg eras was former Iowa State assistant (who is now at Washington), T.J. Otzelberger. He served as Ejim’s recruiting coordinator during the McDermott years, where Iowa State recruited Ejim for a full two years before the Canadian signed out of the Brewster Academy in New Hampshire.

Just days after being named Iowa State’s head coach, Hoiberg hired Otzelberger to be his associate head coach. That turned out to be a shrewd move and just might have kept Ejim’s future secure in a Cyclone uniform.

When the McDermott to Creighton news broke, Ejim’s allies out east began receiving calls about his future. Opportunities to play big league ball out east were present.

“A lot of Big East and ACC level schools were looking for somebody late,” Otzelberger said. “Fred and I went out and met with him at Brewster and spent a day with him. We answered his questions and continued to build a relationship with him.”

At that time in a young man’s life, new-found attention can be flattering. Commitments are often difficult to keep. For Ejim though, the choice to honor his letter-of-intent with Iowa State was what he now calls, an “easy” one.

“T.J. told me that Fred was a great guy and that people love him in this town,” Ejim said. “He thought they would do some good things here and he thought he was one person who I would love to be coached by. I stuck with T.J. I stuck by his word and had a great career.”

At Iowa State, Ejim saw an opportunity to play right away and he indeed made an immediate impact. In year one of the Hoiberg era, the Cyclones severely lacked depth, which allowed the undersized “big” to see plenty of reps. Perhaps that is where Ejim’s determination began to form. As a delicate rookie in the brutal Big 12, Ejim averaged 10.2 points and 6.7 rebounds per contest. He was as raw as freshly picked carrots but it was evident that there was room to grow. Above: Ejim during warm-up drills as a freshman in 2010.

When it comes to showing how far Ejim has come in four years as a basketball player, Otzelberger’s analysis of Ejim’s game could not be more telling.

“He came in, truthfully, as an athletic frontline player that was probably most suitable to be an undersized center by virtue of his ability to shoot the perimeter jump shot and lack of being able to put the ball on the floor,” Otzelberger said.

Ejim’s statistics from early in his career clearly represent that point. During his freshman and sophomore years combined, Ejim was a 22.5 percent 3-point shooter. He only made 24 triples in the two years combined. It was during Ejim’s junior season where the transformation from “glue guy” to “legitimate force” began.

As a junior, Ejim made 24 3-pointers (notably the same number as the two previous seasons combined), while shooting 35 percent from behind the arc. Ejim led the Big 12 in rebounding at 9.3 per (standing tall at 6-foot-6) and all the while, his assist numbers jumped as well.

Look at him now.

“All of the Cyclone fans have seen Melvin Ejim when he stepped on the floor for the first time as a kid, “Hoiberg said. “He is walking out of Iowa State as a man.”

With what Iowa State hopes will be a handful of games to play, Ejim has already sunk 34 3-pointers this season (at a 33 percent mark). He is the Big 12’s leading scorer at 18.4 per game and ranks second in the league in rebounding at 8.6.

“What you have seen over a four-year period of time is a gradual evolution from an energy, interior player to a versatile forward that can shoot the three, put it on the floor and beat you off the dribble,” Otzelberger said. “He can make a great pass. Those are skills that he developed over the last four years that when he came in, he didn’t have. It is a testament to his work ethic. A lot of guys talk about living in the gym. Melvin is so disciplined that you never have to ask him to do it.  He does it himself.”

“He spent a lot of time working with me in the summers to get my jump shot right,” Ejim said. “He took out a lot of the bad habits that I had formed. Every year I got progressively better and better.”

Hang up the jersey?

In the world that seems to be obsessed with advanced statistics, intangibles often times get forgotten about.

For the number guys out there though, Ejim’s statistics pack a real punch. When it is all said and done, Ejim will rank in the top-20 all-time at Iowa State in scoring, rebounding, steals and blocks. He will be the second leading rebounder in Iowa State history. Ejim has a chance to break Iowa State’s all-time starts record, should the Cyclones go far enough in this year’s NCAA Tournament. Ejim is one rebound shy of becoming the fourth player in Big 12 history to record 1,500 points and 1,000 rebounds. Also, his 48-point performance against TCU last month still stands as the highest scoring game in Big 12 history.

The traits that cannot be measured by numbers are why Ejim belongs in this elite category of former Cyclones though.

“It’s one of the best things that has happened to this program, is having Melvin Ejim in a Cyclone uniform for four years,” Hoiberg said.

Otzelberger refers to Ejim as the “rock and foundation” of the current Iowa State basketball program.

“Him staying has been so pivotal because through all of the changes, the turnover, the transfers coming in, he has been the stabilizer who has been there,” Otzelberger said.

Ejim is now a day away from winning the Big 12 scoring title. He will soon play in his third straight NCAA Tournament. He is an Academic All-America. Ejim’s loyalty to Iowa State, work ethic and results on the floor are undeniable.

Does Ejim possess the obvious, smack-you-in-the-face type of talent of an Andrew Wiggins, Marcus Fizer or even Royce White? Not at all. But when you combine his leadership, numbers and all of the intangibles, you get a total package that truly is one of a kind.

Melvin Ejim isn’t the best basketball player to ever don the Cardinal and Gold. He’s far from it. But because of the uniqueness of his career and the overall toughness that he has always brought to everything that he does, the No. 3 at Iowa State will always be special at Iowa State.

“It’s been a great ride. I’m glad that I was able to learn and grow with Fred during his first four years,” Ejim said. “I’m not sad because I think I’ve done some great things here. It’s a fitting end to a great career. It’s exciting. I’m happy to get to experience this with my family and fans but it will definitely be hard to move on.”

Note to future Cyclones: When you get to Ames, Iowa and you have an opportunity to pick out your number, be careful if you choose No. 3. Those are some enormous and nearly impossible shoes to fill.