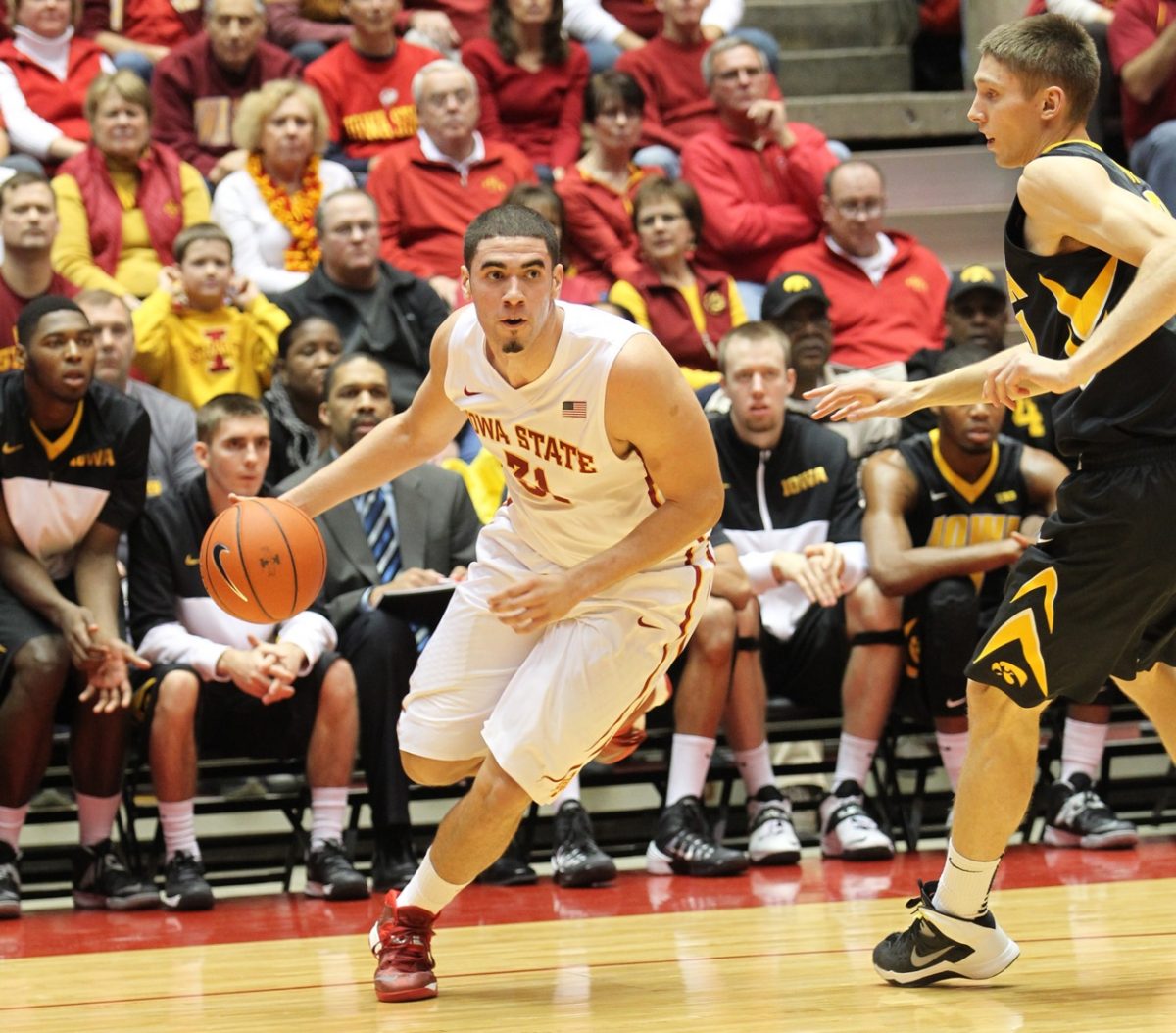 So you want to win the Big 12 huh, Cyclones? Well, winning games like Saturday’s 12:45 p.m. road trip (on the Big 12 Network) at Texas Tech are essential when attempting to accomplish such a feat.

Motivation shouldn’t be a problem this weekend for the Cyclones. All Fred Hoiberg has to do is show his team game film from last year’s road trip to lovely Lubbock (Jan. 23, 2013). The Cyclones entered that contest winners of eight of nine (with the one loss coming at Kansas and you all know how that one went down). A sleepy Iowa State team went 6-for-23 from 3-point range, was bruised on the glass 38-29 and Texas Tech held the Cyclones to a season-low in points in the 56-51 defeat, a defeat that proved to keep Iowa State’s name off of a rather important trophy.

“I think last year when we played Texas Tech, if we would have won we would have been in a three-way tie for first with Kansas and Kansas State,” Melvin Ejim recalled. “It was something that we let slip away from us. These games are crucial. We have to go out there and take care of business. These are the little ones that count in the long run when you are trying to play for a conference championship.”

Last year’s game at Texas Tech was the only time since January, 2011 that Iowa State hasn’t scored at least 60 points. It was a very un-Iowa State (in the Hoiberg era) type of performance by the Cyclones and one the men wearing cardinal and gold have heard plenty about this week.

“We were just so flat,” Hoiberg said. “I thought that it was our worst performance of the year on offense and they had something to do with that. I thought we learned a lot from that game as well and got better. We had some games that we have been fortunate to win this year and I thought that we learned from them.”

This is a very different Iowa State team compared to last year’s though. These Cyclones very well might chuck 23 3-pointers again on Saturday, but they don’t have to do that in order to win. It is a better defensive team that gets easier looks in transition because of it. Iowa State is the 13th ranked team in America and a sexy underdog pick to win the Big 12. But under the direction of veteran head coach Tubby Smith, Texas Tech is better too.

“I have always been a big fan of his. I watched him a lot when he was at Minnesota,” Hoiberg said. “You better bring your hard hat and lunch pail for this one.”

By all means, the Red Raiders appear to be better than their 8-5 non-conference record would lead you to believe. It is important to note that all five of Texas Tech’s losses have been to high-major programs (Alabama, Pittsburgh, Arizona, LSU and Arizona State). Only one of those losses came at home, a 71-69 defeat by LSU. All of those five teams are currently ranked in KenPom.com’s top 65.

“They start 6-8, 6-9 and 7-foot at the three, four and five,” Hoiberg said. “All of those guys are skilled around the basket and can step back and knock down long-range shots. They bring it.”

That size could potentially be an issue for Iowa State, who struggled on the glass in Tuesday’s win over Northern Illinois. The Huskies out-rebounded the Cyclones 46-36 in that one.

What Texas Tech lacks in pure talent, it tends to make up for with toughness.

“They defend,” Hoiberg said. “They will hit you and you have to make first contact on the glass. We didn’t do that in our last game. If we want to have a chance to win this game, we need to hit them first and find a way to get the rebounds.”

Veteran forward Jaye Crockett currently leads the Red Raiders in scoring at 13.6 points per game (to go with his 6.2 rebounds). Junior Jordan Tolbert has been a force too at 12.6 points and 6.8 rebounds per contest.

“With Tubby there, they have a new dynamic with the team,” Ejim said. “I think it is great for us to play against them in our first game because they are definitely one of the toughest teams in the Big 12 just physically.”

*** The longest winning streak in Iowa State history is 13 games. That occurred from Dec. 3, 1999 to Jan. 19, 2000. So obviously if Iowa State can take care of business vs. Tech, the Cyclones will tie that all-time mark.

*** Iowa State has won three of the last four meetings vs. Texas Tech and owns as 12-11 edge in the all-time series. However, Iowa State is 3-7 all-time in Lubbock. Iowa State’s only win in Lubbock in the last seven years came in 2012.

*** DeAndre Kane is the only player in America who is averaging at least 15.0 points, 7.0 rebounds and 6.0 assists per game.

*** KenPom.com ranks Iowa State as America’s 16th best team at this point in the season. Texas Tech is ranked 110th.

*** Iowa State opened as a six-point favorite in this game in Las Vegas.

Texas Tech reminds me of those old Texas A&M teams that didn’t have much talent but were as physical as all get out. As our staff has written about many times on this site this season, these Cyclones appear to be more drought proof than last year’s bunch. That grit, improved defense and overall high basketball IQ should really come into play on Saturday.

Already this season, we’ve seen Iowa State grind out tough victories away form Hilton Coliseum. I think that the same thing will happen again on Saturday but do fear that foul trouble will be an issue for the “big four.” Texas Tech’s frontline is formidable but I just don’t think that Tubby Smith has the guards to hang with a legitimate top 25 opponent like the Cyclones in year one of his tenure in Lubbock.

Common sense says to pick this game to be a lower scoring affair than most Iowa State games but as my good friend Brent Blum pointed out to me on Friday, the Cyclones have scored 70 points or more in 27 of their last 28 games (18 in a row).

I like Iowa State here but am fully expecting this one to be an absolute meat grinder.