Iowa State currently does not have an acting offensive coordinator. However, the Cyclones did pick up their possible quarterback of the future on Saturday via a verbal commitment from Spring, Texas’ Darius Lee-Campbell.

Lee-Campbell, who Rivals.com lists at 6-foot-2, 200-pounds, visited Iowa State the weekend of the TCU game and knew at that time where he wanted to play his college ball.

“We basically fell in love with the place,” Lee-Campbell, who went on the visit with his mom, said. “I wanted to commit then but my dad wasn’t with me so we were trying to get him on board.”

That was the mission of Iowa State’s offensive line coach and Lee-Campbell’s lead recruiter, Chris Klenakis, when he visited the prospect’s home on Wednesday of this week.

“We got my dad on board,” Lee-Campbell said. “It was the right time to make a commitment.”

“I had a lot of coaches come in and offer me at quarterback and a lot of coaches came in to see what other positions I could play,” Lee-Campbell said. “Iowa State was the one school that came down there, Coach Mess (Courtney Messingham) and Coach K actually, and watched me throw. Right after that, they offered me. They were the ones that actually came and evaluated me in person. That meant a lot.”

Lee-Campbell said that his family had an in-depth conversation with Klenakis about the future of Iowa State’s offense, being that former offensive coordinator Courtney Messingham was fired just last week.

“We talked about all of the offenses that he (Klenakis) has been a part of in his coaching career,” Lee-Campbell said. “When Coach Mess got fired, I called Coach K to see what was up. He told me that they weren’t going to change the offense around. They were basically going to take the last two games. That’s what they will be doing in the future.”

Why choose to pass on some quality offers from your home state to head north to Iowa?

Well, Lee-Campbell is actually a Colorado native. His family only moved to Texas when he was a freshman in high school.

“I used to watch Seneca Wallace play when I was a little kid,” Lee-Campbell said.

Lee-Campbell will be the youngest of five scholarship quarterbacks on Iowa State’s roster in 2014.

“I want to compete as soon as I get up there,” Lee-Campbell said. “They have a lot of young quarterbacks and if I don’t win the spot now, I will be backing them up for a couple of years. I want to get in there and compete right away.” 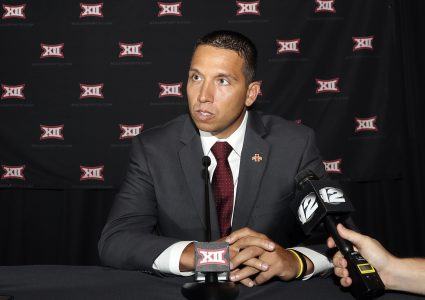