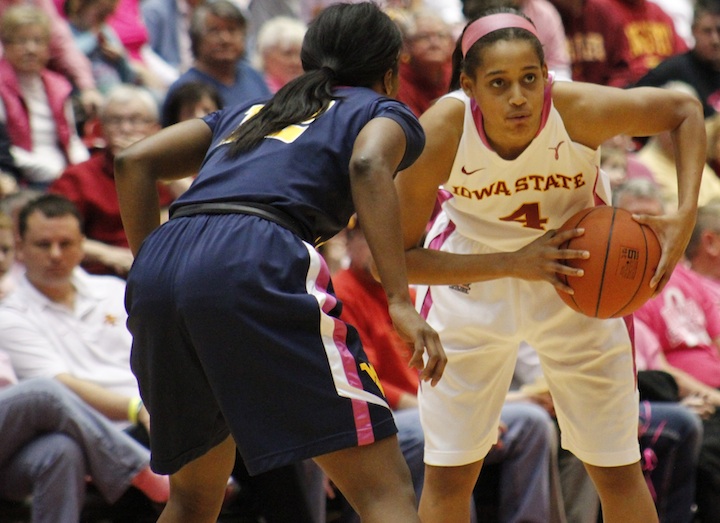 AMES – There are plenty of gaudy statistics to gawk at, but the most impressive aspect of Iowa State’s 7-0 record can’t be found in a box score.

It’s the Cyclones’ aggressive, breakneck style of play. Instead of winning because of Chelsea Poppens-like grit, No. 20 Iowa State is playing with some flair.

“They are very, very efficient,” Panthers coach Tanya Warren said. “I say that sincerely. They are as efficient as I’ve seen in a long, long time.”

Iowa State coach Bill Fennelly deserves a lot of the credit. In less than a year, he has turned a determined defensive squad into an offensive dynamo.

Last season, the Cyclones averaged 67.4 points per game on their way to a seventh-straight NCAA Tournament.

The pace is different this year.

After seven games, Iowa State is putting up 82.6 points per game. That number is good enough for 23rd in the country, and gets more impressive knowing the Cyclones are giving up just 55.4 per contest.

Iowa State is benefiting from a bevy of ball handlers, the versatile Christofferson, and believe it or not, from watching the men’s team practice.

“We’re hard to guard,” Fennelly said. “Not anything great, but we can move people around. Our spacing as been really good, we’ve worked on it.

“I’ve watched Fred Hoiberg practice for a couple of years and you can always learn from someone. The spacing he teaches his guys, we’ve tried to put in our system a little bit.”

The reasons for Iowa State’s scoring surge were on display against the Panthers (2-6). Playing with a small lineup for much of the night, the Cyclones ran past Northern Iowa by attacking the hoop and finding open teammates. Iowa State scored 42 points in the paint on Wednesday.

Nikki Moody – who Fennelly said played her best game this season – scored twice inside for an early 6-2 lead. A minute later, Hallie Christofferson drove and dished to Seanna Johnson for an easy layup and 12-6 edge.

The Panthers hung around to make it 14-14, but the Cyclones dominated from there. Iowa State went on a 16-0 run on the back of seven Christofferson points. Jadda Buckley capped the spurt with a long 3-pointer to make it 28-14.

Fallon Ellis and Kidd Blaskowsky both drilled 3’s before the half was over to give the Cyclones a 43-26 advantage.

The game never got closer than 16 points in the second half as Iowa State cruised. Christofferson paced the Cyclones with 22 points, five rebounds and five assists. Moody dictated the pace all game, tallying 16 points and eight assists.

“I’m an assists person,” Moody said. “I wish I would have had two more assists. It’s not that I don’t really focus on the points, it’s what can I do to get my teammates on a level to where their confident.”

Johnson finished with 14 points and 13 rebounds. In total, nine Cyclones scored in the win and Iowa State shot 44 percent from the floor.

“We told them, (UNI) is going to try and take away the 3-point shot, beat them off the bounce,” Fennelly said. “Our kids did a good job of that.

By playing small, Fennelly hopes the Cyclones can outrun their opponents. The plan is clearly working thanks to stellar guard play and the always-steady Christofferson.

Obviously the schedule will get tougher, but after seven games, Iowa State looks ready to run with the best in the Big 12.

Seanna Johnson is only a freshman, right?

After winning consecutive Big 12 Freshmen of the Week honors, Johnson’s encore at Hilton was impressive. The Brooklyn Park, Minn. native outmuscled the Panthers for 14 points and 13 rebounds.

“Her game is going to get the ball, beating people off the dribble and that’s what she’s done,” Fennelly said.

Johnson’s versatility is proving to be a real luxury for Iowa State. Despite playing a small lineup, the Cyclones aren’t missing much inside because Johnson is averaging 12.9 points and 7.1 rebounds.

The Big 12 and the rest of the country are noticing. Fennelly doesn’t think Johnson will let the success go to her head.

“She’s getting a lot of attention for a freshman,” Fennelly said. “It’s like the holidays, all the eating. It feels good, but if you eat too much you get sick.

A familiar face will greet the Cyclones on Sunday when they host Cal State Fullerton – Steven Fennelly. The youngest Fennelly spent the past four seasons coaching with his dad Bill before becoming an assistant with the Titans this year.

Cal State Fullerton is finding its way under first-year head coach Daron Park. The Titans are 1-5 so far this season (pending Wednesday’s result) and shooting just 37.6 percent from the floor.

The afternoon tilt figures to be an emotional one for the Fennelly family as Steven returns home to Ames. Steven graduated from Ames High School and earned his bachelor’s and master’s degrees from Iowa State.

– Iowa State improved to 34-8 all-time against the Panthers, including a 17-0 mark at home. The victory also improved the Cyclones to 7-0 for the first time since the 2001-02 season.

– The Cyclones have now hit a 3-pointer in 588 consecutive games.

– Jadda Buckley and Hallie Christofferson were both in foul trouble and only combined to play 40 minutes.

– Lexi Albrecht entered the game late and hit a 3-pointer for Iowa State. 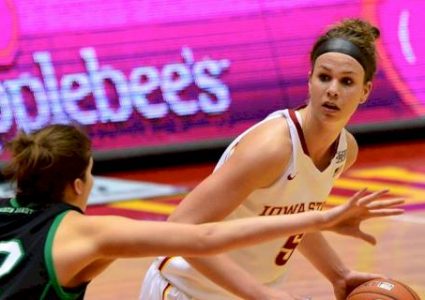 Smith: Iowa State will be force in Big 12